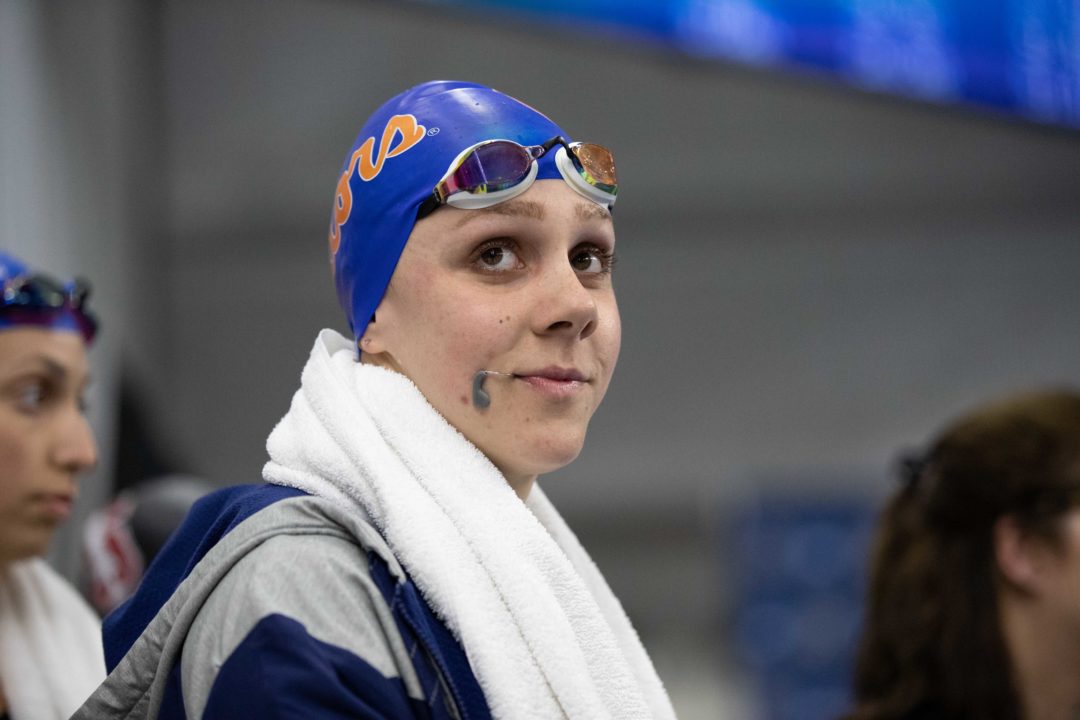 In the first meeting between the Florida Gators and the Florida International Panthers, the Florida women were hot out of the gate with impressive swims from top players.

This was a far better start to the season for the Gators as compared to last season when they opened on the road against Florida Atlantic. Senior Sherridon Dressel uncorked a fantastic swim in the 100 back, winning the event in 52.87. She was 52.57 at last year’s mid-season meet and was just 55.54 in UF’s opening weekend last September.

Notably, 2018-19 freshmen Layla Black and Mabel Zavaros did not race today, and they do not appear on UF’s roster online. Rosie Zavaros, Mabel Zavaros’s twin sister, did compete today and won the 200 back (1:58.97). SwimSwam has reached out to the UF staff for more information.

MIAMI, Fla.— The Florida Gators opened their 2019-20 campaign with an all-around team win against the Florida International Panthers on Thursday at the Biscayne Bay Aquatic Center.

The Gators defeated the Panthers by a tally of 194-101 and won 15 of the 16 total events with 34 Gators competing in at least one event.

The meeting marked the first time the two programs have competed against each other.

The relay team 200 medley relay team of Sherridon Dressel, Vanessa Pearl, Chade Nersicio and Bella Garofalo paced Florida by winning the first event of the meet in a combined time of 1:41.63. Another group of Gators (Emma Ball, Adrianna DeBoer, Talia Bates and Gabby Hillis) finished in the second place in a combined effort of 1:42.68. The Gators would again take a relay victory as Hillis, Dressel, Emma Ball and Nersicio beat the field by five seconds in the 200 free relay in the final relay of the meet.

Freshmen would reel in five individual victories in their first collegiate meet. Kathleen Golding won the 200 free with a swim of 1:49.22. Later, she would go on and win 500 free by almost 20 full seconds. Bates would join in her winning her first two collegiate meets of her career in the 50 free and 100 fly. Allie Piccirillo earned her first win of her career in the 200 fly in an effort of 2:02.06.

The Gators would take the top three spots in the 100 back as Dressel picked up her second win of the day with an effort of 52.87. Teammates Rosie Zavaros (56.72) and Celi Guzman (56.81) were right behind her to finish in second and third, respectively.

In the diving events, Ashley McCool won the 1-meter with a final score of 302.33 in her first meet as a Gator. Elizabeth Perez picked up two points with her fourth-place finish (265.43).

McCool would follow-up her 1-meter performance with a runner-up bid on the 3-meter with a final score of 285.83. Perez would again finish in fourth with Abby Howell and Emma Whitner coming in behind her in fifth and sixth-place.

Head Coach Jeff Poppell: “I was very pleased with our swims for the very first meet of the season. Several of our returning athletes were faster than they were at any point of the season last year. Furthermore, I thought out freshmen did a fantastic job, which included event wins by Talia Bates, Kathleen Golding and Allie Piccirillo.”

Diving head coach Bryan Gillolly: “The meet today was a success. I thought the girls did well on the 1-meter for this time of the year. I can definitely see we are heading in the right direction as a team. Ashley’s (McCool) first meet as a Gator showed a lot of potential. As always for this time of year there is a lot of work to be done but I am really optimistic about the season ahead.”

The team will stay in South Florida for meets on Friday and Saturday. The Gators will hit the pool tomorrow at 3:00 p.m. against the Miami Hurricanes and then wrap-up the week in Boca Raton, squaring-off with the Florida Atlantic Owls at 10:00 a.m.

Despite the defeat, the competition welcomed a good challenge for the five-time C-USA champions who hope to reinstate that title at the end of the season.

“Facing Florida was the challenge we needed,” said Head Coach Randy Horner, “We fought hard and didn’t give up. Hopefully we came out of hte day with some good experience that will help us as we continue our season.”

Sophomore Maha Gouda led the Panthers from the three-meter spring board picking up her first win of the season after posting a score of 297.33. Followed by Junior Rachel Foord who nabbed third with 276.45. From the one-meter, Gouda finished second (293.33), Foord at third (284.25) and senior Brooke Bouchard snatched fifth with a score of 258.83.

Gouda, fresh off an All-American campaign last season, set the tone for what this season will look like in only one day of competition, as her scores qualified her for the NCAA Zone competition from both the one and three-meter events.

In the lanes, Horner was impressed with freshman Lamija Medosevic. In her Panther debut, she captured three top five finishes to give FIU a hopeful run. Medosevic chased the Gators in the 200 freestyle and swam a time of 1:51.19 for a second-place finish. In the 50 and 100 freestyle events, she came in third with times of 24.04 and 51.58, respectively.

“Lamija had a solid debut to her FIU career. Having a team behind her is new and she responded to the atmosphere,” said Horner.

Senior Taylor Grabenhorst secured two top-five finishes for FIU. The veteran touched just 1.1 shy of first during the 100 breaststroke, ending with time of 1:04.05. Her 200 breaststroke swim also resulted in a second-place finish when she checked in at 2:19.04.

FIU will welcome crosstown foe Miami to the Biscayne Bay Aquatic Center on Saturday, Sept. 28 at 10:00 a.m. Prior to the meet the Panthers will host a ring ceremony to receive their conference award.

SCOUTING MIAMI
The meeting between the Panthers and the Canes marks the sixth time the two have met in the pool and the series sports an even 3-3 record. FIU picked up a win in 2017 and defeated the Canes twice in 2015. Miami came back last season in 2018 to upset FIU in their home pool. Now the Panthers welcome back the 8-mile opponent to the Biscyane Bay Aquatic Center in hopes of adding a victory to the win column and break away with the series lead.

This family could literally be US’ 400 Mixed relay… Have you guys ever seen Caeleb’s brother? Man’s built like a tank, some crazy genes,

I think that Mabel is going to be another redshirt.

The Dressel family is so talented!

Her underwaters are always good. If you watch her from her past races, the swimming part is what is costing her from being good to great