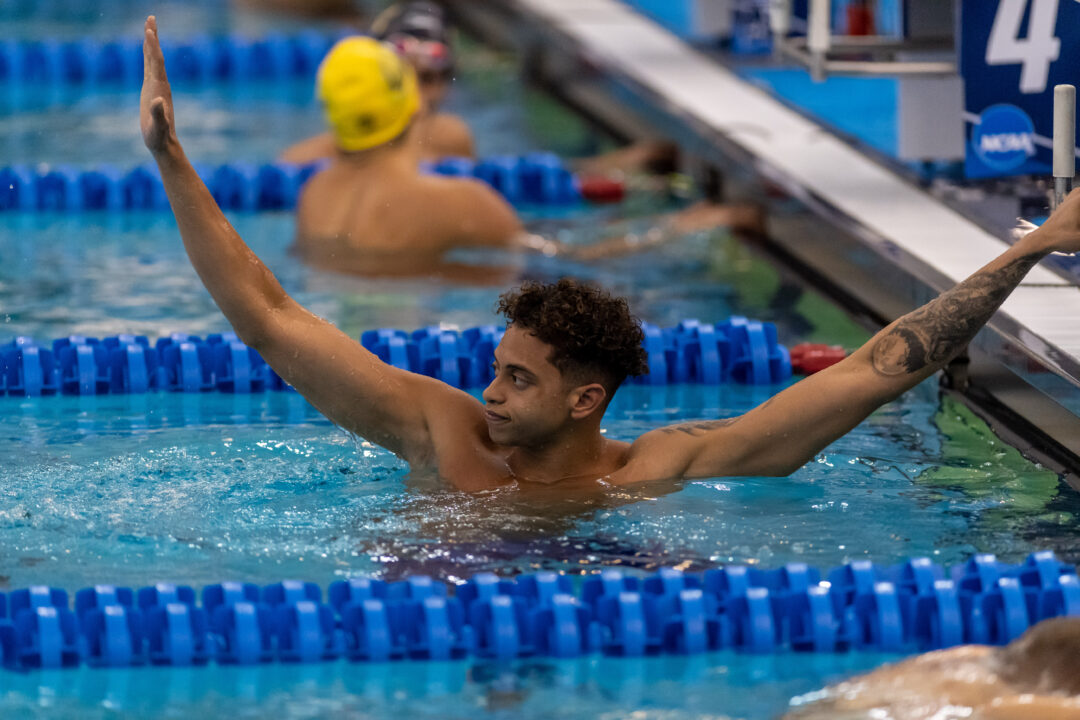 One week after announcing his official move to Austin, Casas made his Longhorn debut at the Eddie Reese Invite, racing the 150 back/150 fly/50 free. Archive photo via Luke Jamroz Photography

Hear what multi-Olympic medalist Kyle Chalmers of Australia has to say about dealing with ongoing shoulder issues ahead of this year’s Commonwealth Games.

Each season, Eddie Reese and the University of Texas host the famous “Eddie Reese Invite.” The Longhorn men will suit up and compete in an intrasquad meet that features both pros and members of the varsity team.

The invite consists of off-distance events that allow athletes to get out of their comfort zones and race without too many expectations. The events are odd, but Eddie likes them that way.

Typically, the Eddie Reese Invite is held in October, which is Texas’ big training month, also known as “Rocktober.”

“We had to substitute, as our Ohio State/Kentucky meet for this weekend was canceled,” said Reese.

Instead of traveling to Columbus, the Texas opted to throw some tech suits on and race each other at the Lee and Joe Jamail Swim Center.

One thing was for certain, and that was that Shaine Casas was ready to throw down with the UT men.

“Shaine Casas is a monster,” stated Reese via text message.

Eddie also highlighted the men’s distance swimmers. Freshman Luke Hobson blasted a 5:07.2 in the 600 free. For reference, Hobson won the 500 free at the Minnesota Invite last month in a 4:09.72, which is also currently the top time in the nation.

The 300’s were highlighted sophomores Coby Carrozza and Carson Foster. Both Carrozza and Foster were faster than the previous champions from the 2019 Eddie Reese Invite. Carrozza was 2:25.8 in the 300 free, while Foster posted an equally-impressive 2:40.3 in the 300 fly.

The over-distance events provided insight that there’s more in the tank for their 200’s. Carrozza’s best time in the 200 free is a 1:32.70 from last year’s NCAA Championships, while Foster’s best 200 fly time is a 1:43.06 from last year’s dual meet with SMU.

The 150 free featured an absolute dogfight between Foster, Kibler, and Daniel Krueger, who all finished within less than a second of each other. It was Kibler who got his hand to the wall first in 1:07.6, followed by Foster (1:08.2) and Krueger (1:08.4).

These times are slightly underwhelming, with Reese even mentioning that “the sprinters are in trouble.” Kibler’s been out as fast as 1:06.4 when he split 1:30.5 in the men’s 800 free relay at NCAAs, so his time from last weekend was over a second slower than his pace. The 150 seems to be a hard event to race well at the invite, as Maxime Rooney won the event in 2019 and was only 1:08.1.

In the 150 breast, Dutch Olympian Caspar Corbeau won the event in 1:21.8, almost 5 seconds ahead of the entire field. Corbeau won the same event in 2019 with a 1:24.33. Last month, Corbeau put up a 1:50.8 in the 200 breast at the Minnesota Invite, which was at the time the fastest time in the nation, now ranks #2, and is his personal best time. Corbeau is also an elite-level 200 breaststroker in Long Course, boasting a personal best time of 2:08.57 that earned him a spot on the Netherland’s Olympic Team.

I think he should get sponsored by Depends…..when he is swimming fast his opponents sh*t their pants. Or maybe his favorite candy if anyone knows what that is.

The 1Back at Worlds will be Casas and Murphy, and the 2Back will be Murphy and….?

Destin Lasco or Casas but im leaning towards Casas

Mefford just went 1,54 last year and you dont even count him as a contender? Wtf

Especially when Lasco and Casas’ best times are 1:56 high and 1:55 high respectively.

So where was he training up to SC Worlds? A&M or UT? How long has he actually been in Austin?

Will there be a video recapping this invite overall? Love these

Eddie’s got such a gnarly group, it would be a shame if more don’t make the worlds team.