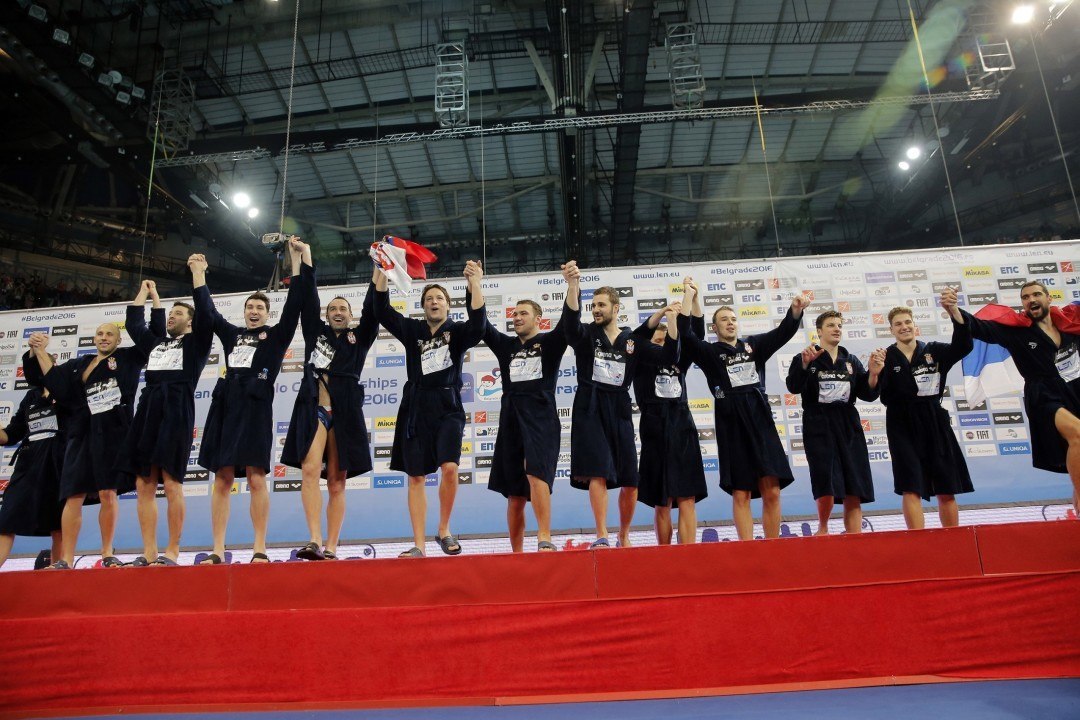 Serbia held off a last-quarter surge from a strong Italian squad to advance to the gold medal match in the 2016 Olympic Games men’s water polo tournament. Archive photo via Dusan Zivkovic/Belgrade2016

Serbia held off a last-quarter surge from a strong Italian squad to advance to the gold medal match in the 2016 Olympic Games men’s water polo tournament. After getting off to a rocky start in Rio, the Serbians have now won four matches in a row, and will carry this momentum into the final against their arch-rivals, Croatia.

In hindsight it is easy to say that the game was decided in the first period. Serbia survived five man-up situations and scored three unanswered goals to go up 3-0 heading into the second quarter. First quarter goals came from Andrija Prlainovic, Slobodan Nikic and Dusko Pijetlovic.

Filip Filipovic opened the score for Serbia in the second quarter with a missile from beyond 5 meters. Stefan Mitrovic scored just over a minute later on a power play, and the Serbs led 5-0 with 6:05 left to play in the second. When Prlainovic made it 6-0 a minute later, Italy took out starting goalkeeper Stefano Tempesti and brought in Marco del Lungo. Valentino Gallo finally got Italy on the scoreboard with 1:52 to go in the half, and Alessandro Velotto added one more 6 seconds before the end of the half.

The third quarter was a study in defense. Only one shot made it into the net, that of Serbia’s Slobodan Nikic, whose center shot made the score 7-2 to Serbia.

The Settebello came alive in the last 8 minutes. Christian Presciutti kicked it off with a marker in the first 20 second, but Filipovic responded quickly to go up 8-3. Nikola Jaksic took advantage of a double-extra to net Serbia’s 9th goal with 5:27 left in the game. Pietro Figlioli nailed one from beyond 5 meters with 4:33 on the clock, but Serbia answered 20 seconds later with a long shot from Dusan Mandic. From there Italy began a late surge, making for a thrilling finish. Presciutti picked up his second goal on a man-up strike with 3:39 to go. Gallo made it 10-7 to Serbia on a long-distance shot with 1:28 left, and Michael Alexandre Bodegas netted one last goal for Italy with 4 second left.

Serbia’s Slobodan Nikic stated: “We were motivated 100%, we have a medal in the pocket and now we are thinking about the final. To be the Olympic champions, that’s our target.
“Our defense today was perfect. We played a really good match. We prepared well and we knew the Italians would provoke, meaning they would have more man-up situations than us. That’s why we started by going 6-0 up, which was a little bit of a surprise.”
“Everything started from our defense. If we play good defense then no one has a chance against us. It’s big because we are a small country and it’s for our people. It’s a big thing to be in the final of the Olympic Games.”