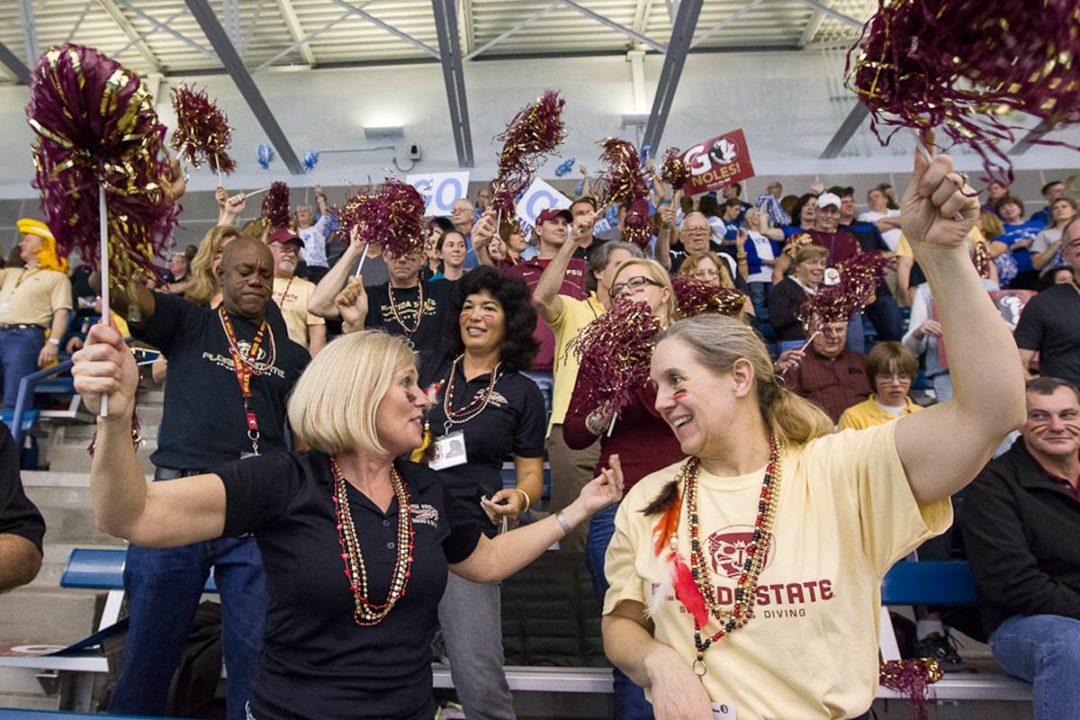 After announcing the additions of Ozzie Quevedo and Dan Carrington to the FSU coaching staff, head coach Neal Studd will also bring on Tiffany... Archive photo via Tim Binning/TheSwimPictures.com

After announcing the additions of Ozzie Quevedo and Dan Carrington to the FSU coaching staff, head coach Neal Studd will also bring on Tiffany Clay to the Seminole program in Studd’s first season in Tallahassee.

Clay, who swam at the University of Tennessee and once held school records there in the breaststrokes, comes to FSU after serving as head coach of LIU-Brooklyn’s women’s swim program in its inaugural season.

“There weren’t many opportunities that were going to pull me away from LIU Brooklyn but this was a big one,” Clay said. “I was given the chance to create something unique at LIU and FSU is another one of those opportunities to be part of a staff that can utilize everything in their arsenal to turn this team into a significant contributor at the conference and national level.

Prior to coaching at LIU-Brooklyn, Clay coached at UNC-Wilmington for four seasons.

The FSU full press release, which talks about all three new assistants, is below:

“I am so incredibly excited to have secured such an all-star staff,” Studd said. “These are three individuals that have huge of levels of experience.  I am honored that they decided to start this journey with me at FSU.  Their experience includes time in both the SEC as coaches and athletes, the ACC and two of them have been head coaches before.  I recruited with the culture of the program in mind and could not be happier with how this has worked out.  All three can coach anything, are hard-working and excellent recruiters.  I think this is a staff that is going to get a lot of work done and have a great time doing it.”

Quevedo comes to FSU after serving as an assistant coach at his alma mater, Auburn for three seasons (2013-16) where he played a big part in international recruiting. He worked with all groups, including the professionals who competed in the 2016 Olympic Games where he was a coach for Suriname.

Prior to Auburn, Quevedo coached on the club and high school levels and was the head coach of the National Training Center Aquatics in Clermont, Fla. where he produced senior and junior national swimmers. In addition to NTCA, he coached both the boys and girls teams at the Montverde Academy.

While an athlete at Auburn, Quevedo specialized in fly and free and was a vital part of bringing home the Tigers second NCAA title in school history in 1999. That season, he was a part of the squad that set the U.S. Open and NCAA Record in the 200 free relay that stood for four years.

Quevedo was also an international competitor for Venezuela, including the 2000 Olympic Games in Sydney in the 100 fly and 400 free relay. He was the national champion in the 50m and 100m fly events in 2000 and is the current masters long-course world record-holder for the 50m fly (24.15), which he set in 2009.  He also is a two-time Pan-American Games medalist.

“This will be a great challenge for me and the entire staff” Quevedo said.  “FSU, academically speaking is an amazing school. The support and vision of the athletic department is magnificent and the facilities are phenomenal. Neal has the leadership skills and knowledge to guide FSU to higher grounds. He can produce fast swimming no matter what resources he has available and no matter where he goes. His energy on deck and with recruiting along with his knowledge of the sport of swimming, is incredible.”

Clay joins the staff from LIU Brooklyn, after serving as the program’s first head coach in women’s swimming history for its inaugural season in 2015-16.  She led the Blackbrids to a 7-5 record and fifth place finish at the Northeast Conference Championships. Clay also helped Milly Furneaux achieve Rookie of the Meet honors.

“There weren’t many opportunities that were going to pull me away from LIU Brooklyn but this was a big one,” Clay said. “I was given the chance to create something unique at LIU and FSU is another one of those opportunities to be part of a staff that can utilize everything in their arsenal to turn this team into a significant contributor at the conference and national level.”

Prior to LIU Brooklyn, Clay spent four season (2011-2013) at UNC-Wilmington where she helped the men’s team achieve their 13th straight CAA title, while helping six of her swimmers to school records.

During her time at UNCW, she helped her swimmers accumulate 21 CAA titles in addition to five earning Olympic Trials qualifying times.

A distinguished swimmer for Tennessee from 2003-07, Clay captured Academic All-America and All-SEC honors, while setting the school record in the 100 and 200 breast. She was an NCAA qualifier all four seasons, placing 12th in the 200 as a junior, and ninth as a senior.

Clay was the first point scorer in the 200 breast since 1989 for the Vols.

She achieved an All-America nod for her part on the Lady Vols’ 400 medley relay as a sophomore. The Mason, Ohio native graduated in 2007 and competed at the 2008 U.S. Olympic Trials.

“What initially drew me to this opportunity was the chance to work with Neal and the staff he was putting together,” Clay said. “Neal is one of those coaches that strives to think outside the box and has been able to make the most out of limited resources to coach his athletes with resounding success. FSU as an institution and athletic department was the other part of the attraction. The dedication to their athlete’s success academically and athletically as well as providing superior facilities and support is nothing short of incredible.

Carrington comes to FSU after serving as an assistant coach for Miami (Ohio) University for two seasons, following his second stint at Duke.

While at Duke, Carrington helped 12 swimmers achieve All-ACC status from 2011-2014, in addition to qualifying athletes for the NCAA Championships.

Carrington also served as the head coach at Southwestern University from 2009-11 in Georgetown Texas, where he helped produce the first SCAC champion in two seasons and first NCAA automatic qualifier and All-American in school history.

In 2011, Carrington earned the ASCA Award of Excellence, which is an honor that recognizes those coaches who coach a swimmer to a top-eight finish at one or several USA national championships.

His first stint at Duke came in 2007-08 season, which was his first collegiate job.

In addition, Carrington served as a the Site Director and coach at the Durham YMCA, was an assistant and age group coach for Delaware Community Schools and an assistant for Yorktown High School.

Carrington earned his Bachelor of Science Degree from Ball State in 2002.  In addition to his coaching experience he served as an Associate at Biogen Idec from 2013-2014 and was a QC Chemist for Eisai from 2011-2013.

“I’m very excited to bring my energy and expertise to a program with coaches that share it,” Carrington said. “This is a very dynamic coaching staff with a great leader in Coach Studd. It’s going to be fun how this puzzle comes together in order to create an environment of success and pride in Florida State Swimming and Diving.”

No distance experience for any of the coaching staff, Studd included?