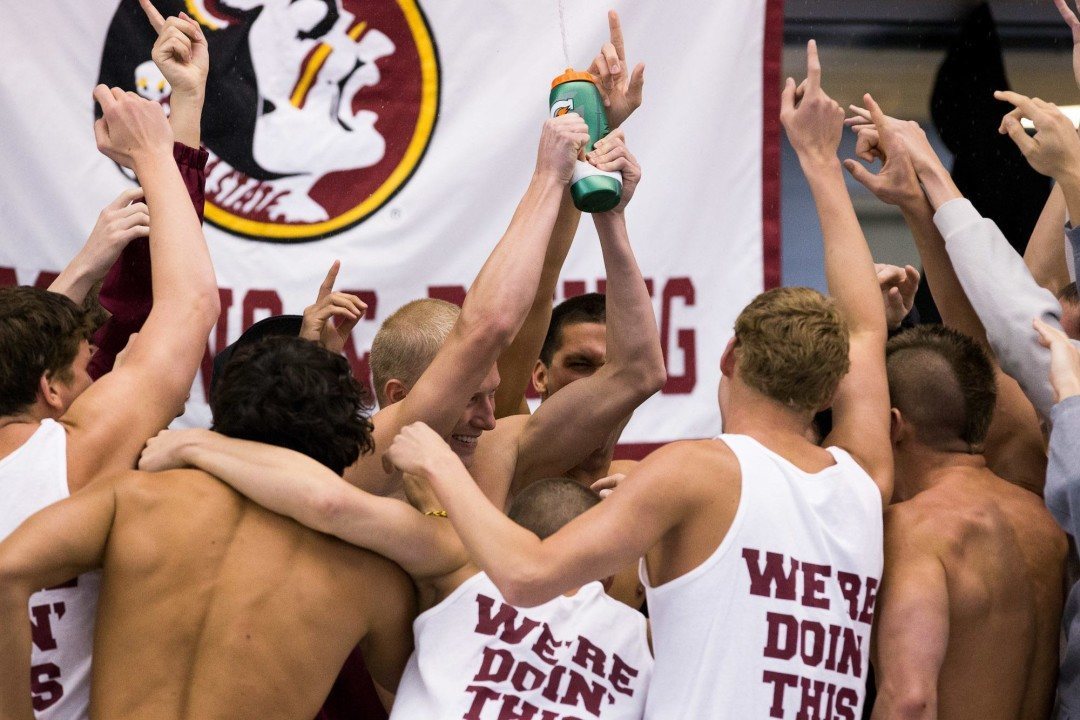 New Florida State head coach Neal Studd has begun to fill out his coaching staff, with  Ozzie Quevedo being the first name added to the lineup.

Quevedo, who has been an assistant at his alma mater Auburn for the last 3 seasons, will join the Seminoles’ new staff as the head assistant coach.

“What I like about working with Neal (Studd) is the fact that he can produce fast swimming no matter what resources he has available and no matter where he goes,” Quevedo said, referencing Studd’s success at Florida Gulf Coast will a less-than-maximum scholarship offering. “His energy on deck and with recruiting along with his knowledge of the sport of swimming is incredible.

“FSU academically speaking is an amazing school, the support and vision of the athletic department is magnificent and the facilities are phenomenal. This will be a great challenge for me and the entire staff, but Neal has the leadership skills and knowledge to guide FSU to higher grounds.”

Quevedo worked with all training groups in his time at Auburn, including their post-graduate, professional group. He travelled with Auburn’s Renzo Tjon-a-Joe to the Rio Olympic Games as a part of the Suriname coaching staff. As an athlete, he was a multiple-time South American champion and a 2000 Olympian representing his native Venezuela. He was a part of the 1999 Auburn NCAA Championship team and as a senior swam on the 200 free relay that broke the U.S. Open and NCAA Records. Auburn head coach Brett Hawke was also on that Auburn team as well.

He joins a new-look staff that is reported to be finalizing its candidates this week. The staff will be entirely refreshed from the one under outgoing head coach Frank Bradley, whose contract was terminated a year early at the end of last season.

Florida State, who has lost several swimmers including their best male and females from last season, due to transfer and retirement, is in rebuilding mode. Both their men’s and women’s programs placed 9th at the 2016 ACC Championships

What a great hire! He failed at every job he took before, but he can lie and bs his way into any job in a world.

Congrats to both guys. Can’t wait to see what you produce at FSU.

Wow, amazing how this turned into an Auburn thread!

What does this mean for the Noles, As an alum, it has been painful to watch the program crumble. I mean come on, it was only a little more than a decade ago that the Noles were producing Olympic medalists and finalists (Steve Parry, Brendan Dedekind) can Studd and staff return the program to pumping out Olympians?

Brett Hawkes knifey/spoony game is coming to an end.

Maybe Ozzie is just upset that Sergio frog jumped him into the head assistant position and would have probably made twice as much money? time to move on!

Sergio should be the head coach at Auburn, not Brett. Can’t take this anymore.

No need to tear up someone’s reputation! A tyrant, seriously!? And you base this on hearsay? Totally unnecessary! SMH!

sorry, this was a response to another post, but she must have deleted.

Get rid of Brett. Save time and money and rebuild the program already! Should have made Sergio the head coach.
Auburn athletics needs to understand the time is now with a new season. With all these coaches leaving Brett will most likely take out his anger on his staff members, which again will make them want to leave the program.