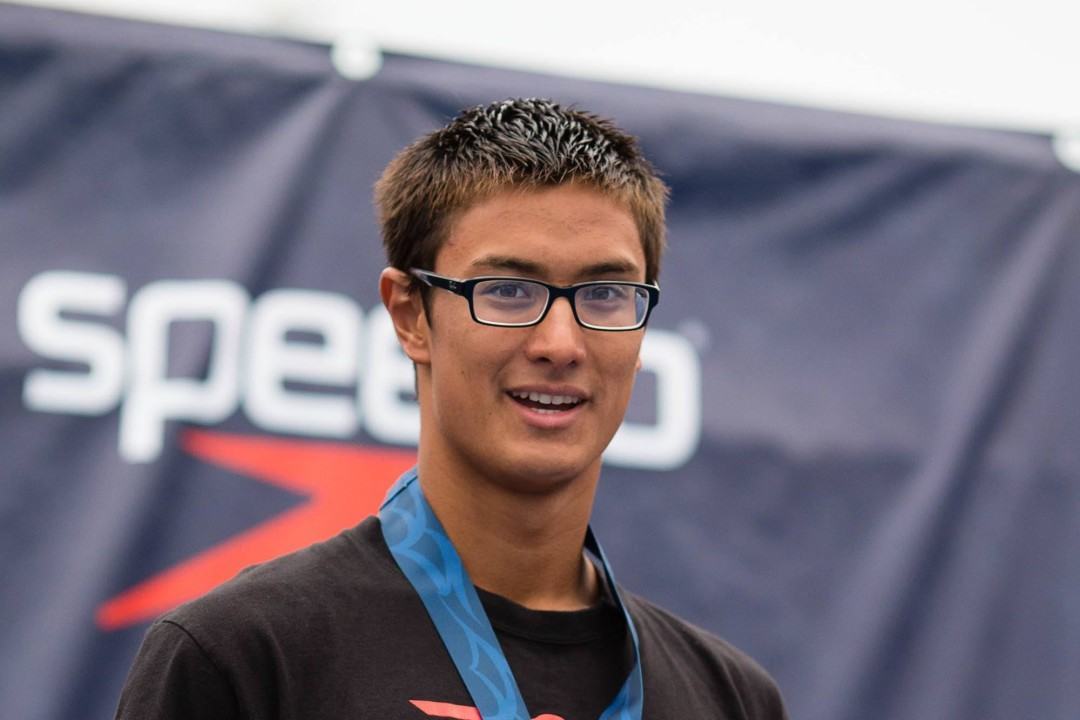 The East Bay Athletic League, more commonly known as EBAL, held their 2015 league championship meet on Friday and Saturday. This is the first of three rounds of high school swimming championships in the California season. After leagues come the highly-anticipated Section Championships (EBAL feeds to the North Coast Section), and finally, the newly-announced CIF-sponsored State Championship meet.

The EBAL meet is particularly noteworthy for the depth of its talent, and is one of the best league/conference/districts in the country. 15 of the conference’s 16 teams (8 male and 8 female) placed in the top 25 of last year’s NCS Championship meet (which at the time was the top available level of competition). That includes 4 of the top 8 boys’ teams, and 3 of the top 4 girls’ teams.

One of the most exciting races of the day took place at the beginning of the meet, when five girls came to the wall virtually together after 8 laps of freestyle, placing second through sixth with only .19 separating them. Carondelet’s Madelyn Murphy won the race uncontested in 1:48.96; she was nearly half a pool length ahead of the next wave: Charlotte Meier of San Ramon (1:53.52), Haley Schreiber of Monte Vista (1:53.61), Ana Henderson of San Ramon (1:53.68), Claire Therien of San Ramon (1:53.70), and Moriah Simonds of Granada (1:53.71).

Forrest White of De La Salle High School took the boys’ 200 free in 1:39.66, leaving the rest of the field in the dust by more than five seconds. White was nearly a second faster than his winning time from last year, and just .07 off the meet record. San Ramon teammates Williams and Teagan Cheney battled for second place, with Williams holding off a fast-charging Cheney over the last 50 and getting the touch, 1:44.99 to 1:45.13.

Granada junior Maxime Rooney (who has already committed to Florida) contributed a double of his own, winning both the 50 free and 100 fly. The versatile Rooney set both the meet and the league record in the 50 free in prelims, going 20.28. His finals swim was a bit slower but he still won by almost a body length, touching in 20.69. Dominic Dalpiaz of De La Salle placed second in 21.11, while San Ramon’s Haket edged teammate Jackson Cardinal for third, 21.96 to 21.98. That was Dalpiaz’ second-fastest 50 free ever, and a full half-second faster than his third-place swim at last year’s meet.

Dalpiaz went on to win the 100 free, going under 46 for the first time and notching a personal best by nearly a full second with 45.40. In a repeat performance of the 200 free final, Williams and Cheney of San Ramon clocked nearly identical times, finishing second and third in 47.00 and 47.09, respectively.

San Ramon Valley teammates Garcia and Miller went 1-2 in the girls’ 100 fly for the second year in a row; this time they were both faster, and Miller, significantly so. Garcia won with a meet-record time of 54.09, nearly 8/10 faster than she was a year ago. Miller touched second in 54.68, her first sub-55 100 fly, and 2.2 seconds faster than her second-place finish last year. Makenna Turner of Monte Vista completed the podium with 56.30.

Rollo earned his second individual title with a 4:36.43 win in the boys’ 500. The San Ramon junior was nearly 4 seconds faster than a year ago when he placed third. Amador Valley’s Jordan Rzenick touched second in 4:45.65, improving his prelims time by 15 seconds. Jeff Tang of Foothill rounded out the podium with  second 4:51.46, improving on his 2014 swim by 2 seconds.

The San Ramon Valley boys’ and girls’ teams further added to their team scores with solid performances by their relays. The girls (Cailey Steffens, Miller, Fusari, and Rachel Smith) and the boys (Brock, Carl Taibl, Cheney, and Haket) both claimed titles in the 200 free relays. They closed out the meet with silver medals in the 400 free relay from Therien, Schumann, Henderson, and Smith on the girls’ side, and Rollo, Brock, Poppe, and Williams on the boys’.

What a fun meet that was: the weather magically warmed up to summer-like conditions just for the meet, and cooled back down immediately thereafter.

The swimmers were mostly, if not completely, untapered for this meet, so the North Coast Sectionals in two weeks will be a lot faster.

How funny is it that there is actually a “California High School”?! It must be awfully big… 😉
I missed the news that Maxime Rooney is going to Florida! Awesome! He’ll be the “Ryan Lochte of the next generation!”

Actually, there are two California Highs. There is one in Whittier as well. We needed to cover both NorCal and SoCal .

Every year I can’t believe California teens still swim in yards until late May! 🙄
Having said that, it will be interesting to see what Maxime Rooney has in store. He already looks good. Don’t forget that I put all my money on him to resuscitate the US men’s 200 free in the coming years at the international level! 🙂