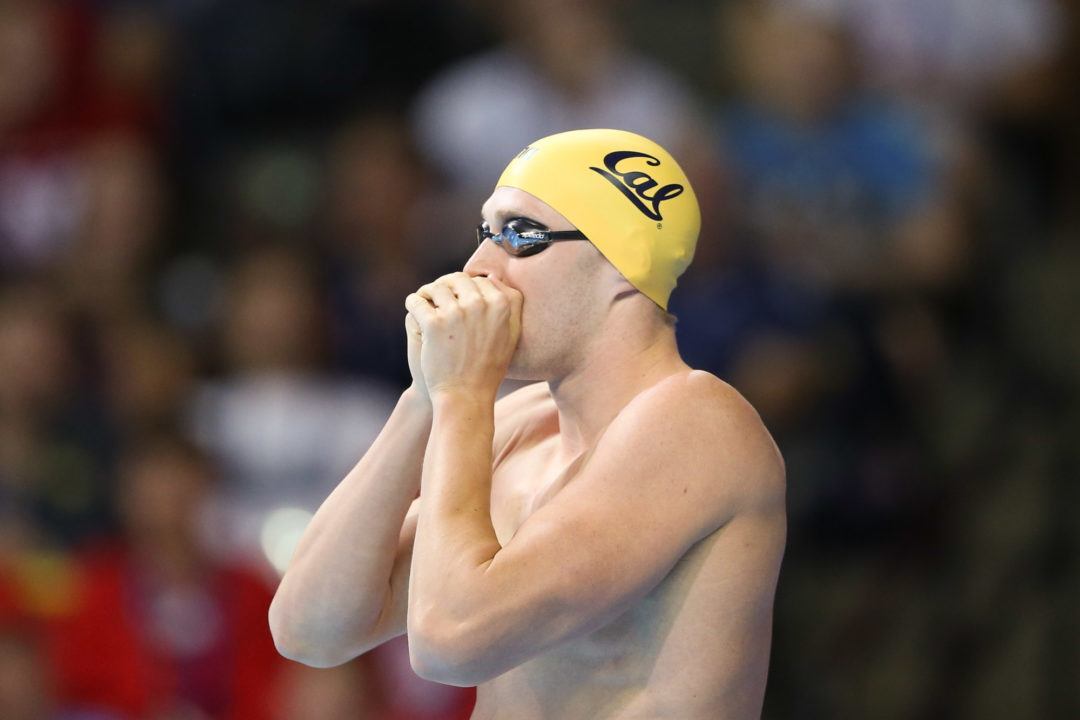 Ryan Murphy set two pool records at his last meet at Cal’s Spieker Aquatics Complex, as the Cal men’s team took on Stanford for their final dual meet of the season.

Stanford freshman standouts True Sweetser and Grant Shoults were the sole Cardinal athletes to take swimming events. Sweetser won the 1000 in 9:00.25, and Shoults took the 500 in 4:21.90.

BERKELEY – Ryan Murphy‘s final dual meet in Berkeley was a lot like the ones that have come before – score a few points, break a couple of records and lead the Cal men’s swimming and diving team to a victory.

But as the bittersweet reality sunk in Saturday that Murphy had competed for the final time at Spieker Aquatics Complex, it served as another reminder that the lasting impact he will leave on the Golden Bear program reaches far beyond his impeccable swimming career.

“I don’t think you can really put it into any words that would justify it,” Cal coach David Durden said following Cal’s 136-105 victory over rival Stanford. “You could look at it from a performance perspective and say he scored this many points, won this many national titles, won this many medals and set this many records. But I think that only captures part of it. He’s such a leader how he manages things outside of the pool.”

An Academic All-American and student in the prestigious Haas School of Business, Murphy set two pool records Saturday – teaming up with Connor Hoppe, Matthew Josa and Pawel Sendyk to win the 200 medley relay in 1:25.61 and then winning the 200 individual medley in 1:44.85. Murphy also won the 200 backstroke in 1:42.37.

It’s been a really good four years,” said Murphy, a three-time gold medalist at the 2016 Summer Olympics. “When I chose Cal, I was super excited to be here. I came in here as a kid and I think I’m coming out as a bigger, more mature kid. This has been the best ride of my life and I’m pretty sad that it’s my last dual meet. But I wouldn’t have wanted to do it with any other group of guys.”

“It’s hard to see (the seniors) go because you go from spending every day with them to, in some cases, not seeing them again,” Durden said. “You know there’s a finality to that. I feel like it’s such a diverse group of guys. It makes it fun every day.”

While Murphy and his fellow seniors may have competed for the final time at Spieker, their collegiate careers are far from over. The Bears next compete at the Pac-12 Championships Mar. 1-4 in Federal Way, Wash.

“Cal has been everything I could have ever imagined and more,” Murphy said. “The amount of inspiring people in the classroom, in the pool and really all facets of life – I’ve learned so much from so many different people.”

BERKELEY, Calif. – #11 Stanford lost its first conference dual meet of the season, dropping a 136-105 decision at #2 California on Saturday at the Spieker Aquatics Complex.

“It’s always a great opportunity to race such a well-rounded team like Cal in a dual meet,” said Goldman Family Director of Men’s Swimming Ted Knapp. “This is a team that could very well end up winning Nationals, so I was pleased to see a lot of our guys come out and compete with them.”

The Cardinal team of Ryan Dudzinski, Matt Anderson, Andrew Liang and Cole Cogswell (1:27.16) started the meet with a runner-up finish in the 200-yard medley relay.

Cal clinched the meet with a podium sweep in the 200-yard breaststroke. Anderson (1:59.34) was Stanford’s highest finisher in fourth place.

The meet ended with the 200-yard freestyle, won by the Golden Bears. Stanford’s quartet of Perry, Liang, Cogswell and DeShon (1:20.06) scored points in second place.