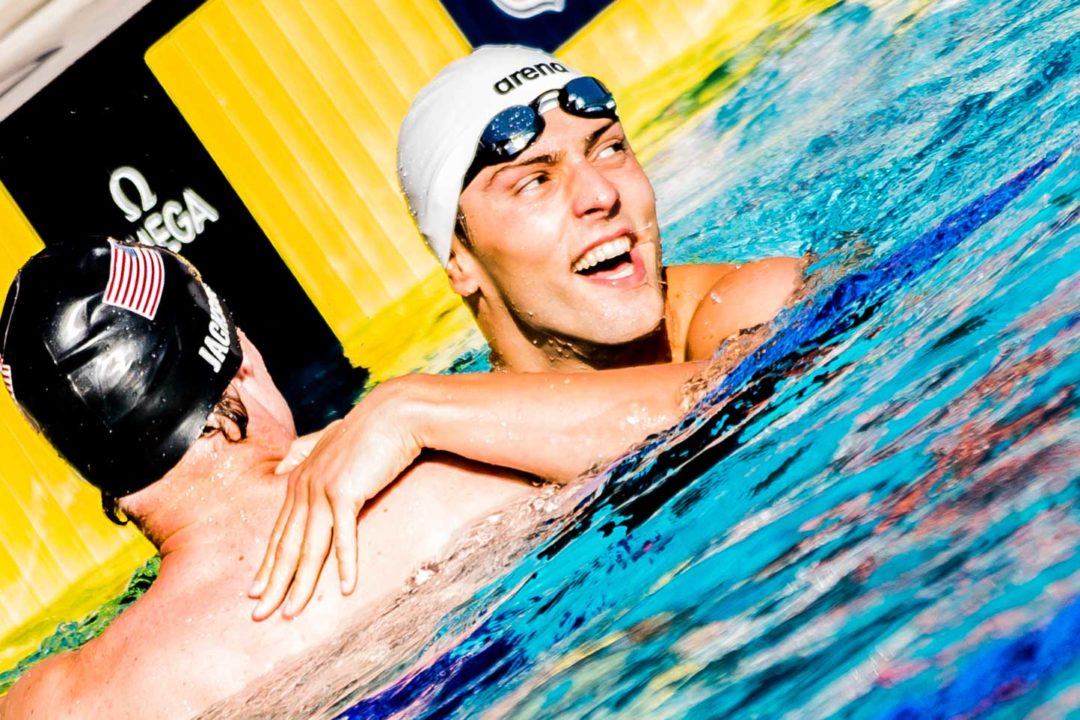 American relay gold medalist from Rio, Ryan Held, is getting creative with his training. He's currently getting some laps underway in a small yacht club pool. Archive photo via Jack Spitser/Spitser Photography

Updated: Held says that he and the other post grads stopped training at the Yacht Club on Friday when the Olympics were postponed until 2021.

While awaiting word from the IOC about the future of the Tokyo 2020 Olympic Games, many swimmers were forced to look for creative training options, especially after most universities shut down their facilities. For some, like Cody Miller, that meant driving hours to train. For others, like Kierra Smith, that meant training in hotel pools.

For American Olympic relay gold medalist from Rio, Ryan Held that meant taking to a small, two-lane pool at Tuscaloosa Yacht Club with 3 other postgraduate swimmers. The group, was training 2 at a time and without a coach on deck in an attempt to maintain safe social distances while still training. Held says the group stopped training there last Friday when they learned there would be no meets to train for in the near future.

“It’s private so there are no lifeguards, swim at your own risk, but they’ve agreed to lend a helping hand,” Held told The Journal-News in a report published on Monday.  “It’s not much, but water is water.

“It’s not like you lose your fitness without being in the water for a few weeks, but you’ll lose the feeling and the tactile awareness of where you are in the water,” he said. “You lose the mental side of it and that’s what people were kind of freaking out about and nervous about.”

In terms of the Olympic Games officially being moved to July, Held said, “It’s kind of a blessing and a curse. It does put life on hold for one more year, but I get to do my passion, my love, for one more year.”

“I’m staying safe and out of the water for now,” Held told SwimSwam on Tuesday of his current training status.

Glad to see that the National Teamers are getting back in the water!!

But….that’s not fair. He must be privileged. 🙂

Stay home Ryan, you never know if you’re an asymptomatic carrier or not, I might end up infecting someone.

So swimming with three other C-19-negative people is less-safe than going to the grocery store? Olympian, suggest you review the C-19 guidelines and explain specifically how this is outside them?

Have they been tested? Given the long incubation period, one of them very well could have it. Then that next person brings it home, someone else there gets it, that person goes to the grocery store, etc etc and the chain keeps going.

If we had a robust testing system you could clear people for that kind of thing, but honestly there’s not really a good way to know who has it and who doesn’t have it in the US right now.

Odds-wise it’s definitely safer than going to the grocery store, but it’s still not perfect.

They’re following state guidelines. You should look in to what Sweden is doing. There is not a one size fits all solution despite what we get bombarded with every day (and just so I’m not discredited, I’m a Bernie voter)

I just didn’t want to be accused of being trumpie as a means of invalidating my opinion. This whole debate seems to go along political lines.

Sweden is a very different place than Alabama, lol. (And thank you for supporting Bernie! I wish we were still doing rallies – I was helping to put those on until the whole apocalypse thing happened.) I think a big problem is we don’t really have a uniform approach, each state is just kinda doing their own thing. (And I’m not saying the approach has to be uniform in that everywhere is doing the same thing, but it’s just so haphazard that we’re definitely drawing this out and infecting more people.) But I agree overall, if they had been doing this in NYC it’d be a lot different than somewhere that right now has few cases. (Though the things we… Read more »

Has to be frustrating having the party turn their back on Bernie again.

Yeah, I’m not sure why there isn’t more testing underway in the US. We see reports that a few million kits have been distributed, more on the way with results in 15 minutes, yet according to the CDC the US tests about 8K a day. Not sure how complete those CDC numbers are though. Maybe people are tested but it’s not reported up to them?

One of those is critical to survival, one of them is an unnecessary choice. How bad will this have to get before people start taking it seriously? How any rational adult can think this isn’t a big deal is beyond me. Its not the flu, its not an attempt to subvert the president.

It is like the flu. FACTS not me say that you are at risk only if you are 60+ with pre-existing serious illnesses in 99% of the cases. There won’t be more deaths ( or a significant difference ) than last years at the end of this. I will come back in a few months WITH THE SCREENSHOT OF THIS POST. Cheers from Italy, go Gators

Hi, you are wrong and bad.

That’s from two weeks ago.

I agree with you, but not really the premise of this article.

Of course you can compare covid to influenza—they’re both viruses that attack the respiratory system, but covid is a lot more lethal.

Think what they want to say is we can’t react to them like they’re the same thing—since covid is more lethal, it requires a stronger reaction

Facts don’t lie, unlike politicians or doctors paid to spread fears. No problem Steve if you don’t believe me now, not to brag but I’m the son of two well recognized doctors and I know what I’m talking about. We will see in the next months if the deaths caused by this virus are more than the ones caused by flu last years.

Being the son of two doctors does not give you credibility. Especially when posting anonymously.

Also – if we just went along with life as normal – the world, open for business! – deaths would be catastrophic. But, if we keep the quarantining, it will greatly reduce those deaths. So, you’ll only be right if we don’t do what you’re saying.

“Facts” = your opinion based of your life experience?

What’s your favourite food?—guess that’s objectively the best food by your logic

who should I trust…random person on the internet who claims to have two parents as doctors and incorrectly refers to total deaths as a metric of severity, or the international multitude of experts who contradict the random person and his parents?

Yuri, I’m on the front lines of this and have been for weeks. My patients are not the predicted over 60 crowd with pre-existing heart conditions. They are 30-50 year olds with no significant medical history. Let’s face facts, once you are on the vent with the FiO2 at 100% and sats that barely crest 80%, there isn’t much to do but pray. This isn’t overhyped. I’ve been practicing medicine for decades. Flu, I can treat, can prevent when the vaccine hits its mark. This is absolutely brutal in both scope and virulence. It’s also an added burden on an already stretched thin healthcare system.

Dude have you seen what’s happening in New York. Wake up!

Is Yuri the child of Yozhik?

Kapas is asymptomatic and tested positive. Read what she said here – https://swimswam.com/world-champion-boglarka-kapas-tests-positive-for-coronavirus/ It is for ones own health, potential of spreading the disease and to slowing down or not to overwhelm the healthcare system that are the consideration. Many may prefer to have a choice to not get exposed to the risk (workers at grocery store, warehouse, police, healthcare personnel). So maybe think again what we can do to help the overall situation. We all have things we want to do and consider low risk. But that’s besides the point. Saw it somewhere and there is some truth – telling you a 3% chance of getting COVID-19 and die and it’s still easy to brush aside. But tell you… Read more »

Plying your trade as an Olympian and keeping yourself and others safe are not mutually exclusive.

It’s very simple my dear flat earthers, the less you expose yourself out there less chances you have to get infected and pass the virus along.
Even if you’re asymptotic you can still infect someone else, in this case, don’t be an a**hole, stay home, it’s not only about you.
It’s nice and fun to go to the Olympics and being in shape, not so much if you’re putting someone else out there at risk.

Another thing, I notice that a REALLY BIG percentage of the US National Team use asthma inhalers, isn’t asthma a risk factor??

What meets are you getting ready for? Protect yourself now so you don’t pay for it later…..seems silly to be training just to train

“What meets are you getting ready for?”…answering that question would sound almost as asinine as asking it in the first place.