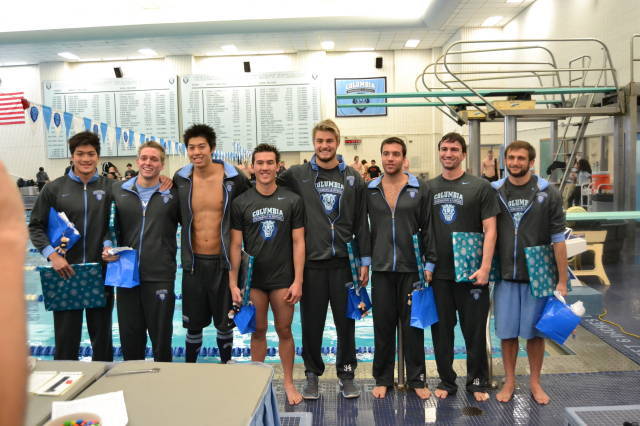 Columbia men’s swimming and diving team celebrated their seniors on Friday night at Uris Pool in New York City, and those seniors put on quite a show, leading the Lions to a 168-132 victory over Princeton. According to a pre-meet interview with senior David Jakl, the Lions were starting their taper and aiming to break records in their last home contest. “These next two meets will be really exciting for us because this is usually when we go our best times of the season and when most of the pool records start going down.” As it turns out, nearly every Lion gave season-best performances.

It was seniors Jakl, Stanley Wong, and Alex Ngan who provided three quarters of the spark to the Columbia 200 medley relay team that edged Princeton in the opening event, 1:29.59 to 1:259.87. Jakl was out in 22.54 to put the Lions in front and each successive teammate outswam his opposing Tiger. After Jakl, Wong went 25.42, freshman Kevin Frifeldt clocked a 22.01, and Ngan brought it home in 19.62.

Jayden Pantel opened the score for the Lions with a win in 3-meter diving. He finished with 356.25 points ahead of senior Micah Rembrandt (340.50). Nathan Makarewicz led the Tigers’ efforts with 315.83 points. Michael Manhard of Princeton robbed Pantel of a double by winning the 1-meter board with 315.75 points.

I’m not that knowledgeable about the Ivy League swimming, but would this be considered an upset? Or not, because Columbia already started their taper? I thought Harvard and Princeton were the teams to beat.