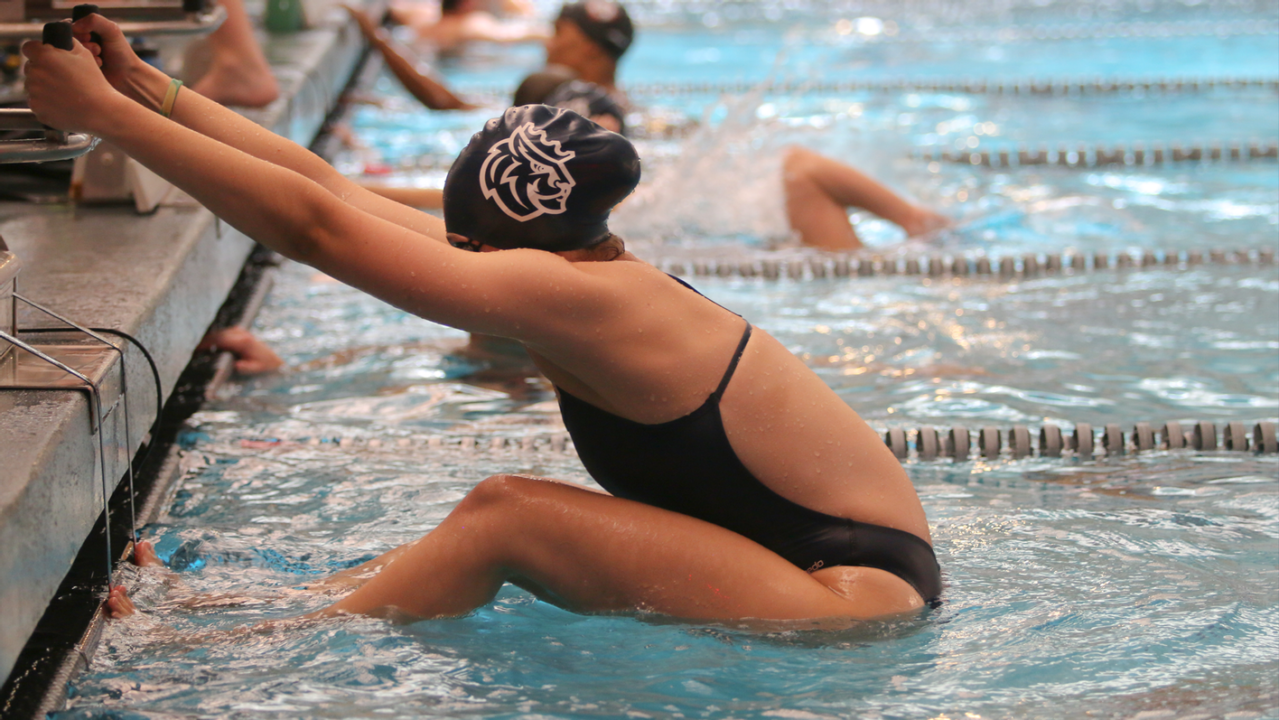 The team took first place in 20 of the 28 events on the day en route to the home victory over crosstown rival Davidson.  Current photo via Queens Athletics

CHARLOTTE, N.C. – Queens made history today, as both the men’s and women’s sides earned victories in the first home meet of the season to earn the program’s first victories as a Division I institution.

Each squad earned victories in the 200 medley relay to kick off the exciting day. That was followed up with a first-place finish in the 1000 yard freestyle by Rebecca Dany, who finished with a time of 10:27.13.

Monica Gumina, who contributed first-place finishes in numerous events today, took first in the 200 yard free at 1:51.99. Daniel Meszaros followed suit on the men’s side with a first-place time of 1:40.21.

The good times continued to roll for Queens as Caroline Lawrence (58.39) and Alex Bauch (49.61) each took the top spot in the 100 yard backstroke with the aformentioned times.

The Royals dominated in the breaststroke as well with both sides also taking first. Annika Huber’s time of 1:04.52 took gold, as did Noah Beladi’s time of 56.55.

Yannick Plasil did his part in contributing to the victory earning a chunk of points with his first-place finish in the 200 yard fly, finishing at 1:51.69.

In the 50-yard dash, Danielle Melilli and Matej Dusa proved why they’re among the elite in the event, each taking the top spot with times of 23.69 and 19.86, respectively.

Gumina, who shined bright on the day, continued her success with a victory in the 100 yard freestyle (51.60). Alex Kunert copied the same result as Gumina, taking first with a time of 45.28.

Andreas Marz joined the scoring party for Queens as well, as his time of 1:51.74 in the 200 yard backstroke gave his squad the largest chunk of points with a first-place finish.

The exciting day concluded with the 400 freestyle relay, as both teams finished how they’d started: with a victory.

On the women’s side, Danielle Melilli, Monica Gumina, Annika Huber, and Tova Andersson cruised to a first-place finish with a time of 3:30.35.

The men’s side saw similar succes, as the group of Matej Dusa, Daniel Meszaros, Alex Kunert, and Jonathan Henschel capped off the day with a 3:01.36 time and a first-place finish.

“A big thank you to Davidson for traveling across town, it is a great dual meet that draws a standing room only crowd” said head coach Jeff Dugdale. “Our student athletes learned some valuable lessons yesterday and applied them today resulting in some nice swims across the board. I walk away from this weekend recognizing that we have a long way to go but very happy to see the progression.”

The Royals are back in action next weekend as they host a pair of home meets against Wingate and Emory.

Saturday was also largely about gauging where the Wildcats are as they embark on a season that will culminate in February.

“We put forth great efforts today,” said coach John Young. “I appreciate a talented Queens team hosting us and offering impressive races against which we can measure ourselves. The ‘Cats had some great performances and some spots where we can use some work, but overall we learned a lot and have reasons for optimism.”

“On both sides, it was great to see the first-years swim well,” said Young. “Dylan and Cynthia grabbing event wins and posting fast times was awesome. Of course, it’s great to see some of our veterans pick up where they left off. I thought the swim of the meet was Kate Pottle’s 500 — I hope she had as much fun swimming it as I had watching it.”

Up Next
The Wildcats will compete at the Richmond Duals Oct. 21-22.