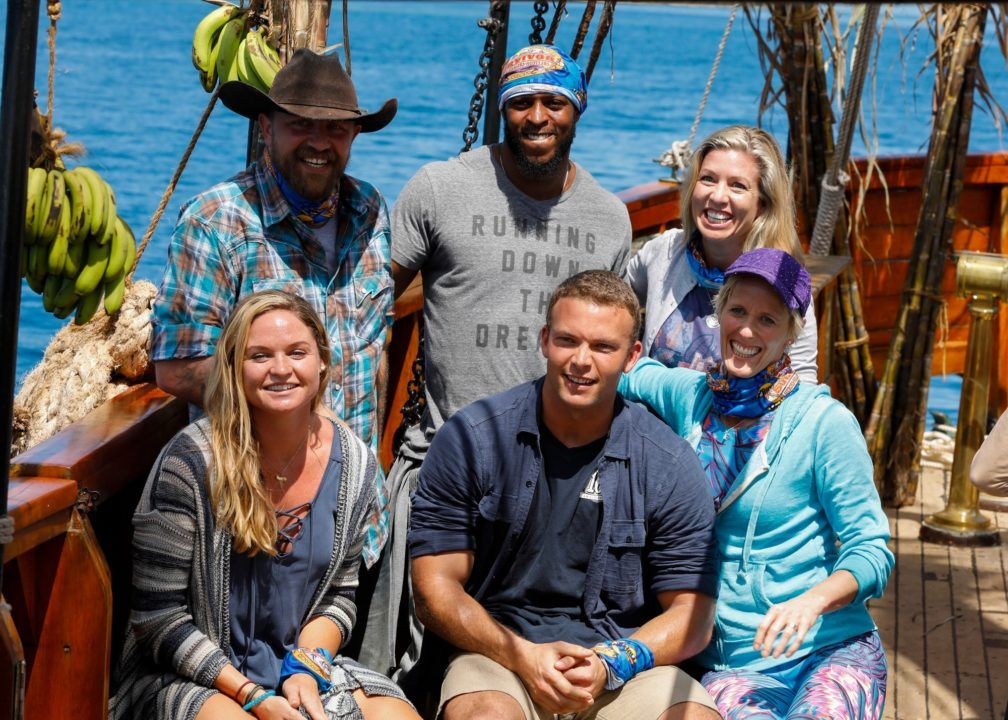 "I think fans should just be prepared to watch an awesome show," Radke says. "The cool thing about Survivor is that it's constantly evolving. They love to keep people wondering what's going to happen." Current photo via Robert Voets/©2017 CBS Broadcasting Inc.

We’re one week away from the premiere of Survivor‘s 35th season on CBS, a season that will feature 1988 Olympian Katrina Radke. Radke found time to chat with SwimSwam about the show’s premiere, which takes place next Wednesday, September 26 at 8 PM Eastern Time.

Though she couldn’t share any details about the game itself, Radke was able to talk about how her swimming background helped her in the casting process, plus gave us an inside look at the pre-game process, comparing it to the ready room at a major swim meet.

Q: Right off the bat, what are your emotions like heading into next week’s premiere after a summer of waiting for it?

A: (laughs) Good question! I’m super excited. We’re going to do a private big party with friends and family, and I’m looking forward to everyone coming together and being able to celebrate this show that I’ve been watching since the beginning.

This is something that’s the culmination of a lot of years. I feel like I hit the lotto getting to be on this show, you know?

Q: That was something else I was going to ask you – how’d you first get connected with Survivor?

A: So originally when it first came out, I can’t remember the year, I think it was 1999 or so, I sent in a video. I was traveling, ironically, for a couple weeks all over the place, so I filmed in like Philadelphia on the Rocky stairs since my nickname was “Rocky” in high school, and then I was in Minnesota doing some business and I was in California… I was in all these random places, so I put all this stuff on my video, and then I got nothing! I was so sad, I was like ‘oh, I really want to be on this show!’

And then, obviously, I got married, I had kids, and for many years I just didn’t even think about it because I wanted to make sure I was home with my kids.

Then last year my husband and I were like ‘hey, let’s apply!’. So I applied about a year or so ago and luckily got a call! Went to a finals interview week, got to meet a lot of people, got to meet Jeff Probst in person, and then boom-boom-boom, it happened and we were filming in Fiji in March!

Q: Tell me a little about the casting process – how did your skills as a swimmer and/or your profile as a swimmer help you in that process of getting on the show?

A: You know, it’s funny – I’m assuming that because the show has so many water elements to it, they always want to have somebody who is comfortable in the water. And even though my true big swimming days are long ago, I keep in good shape and can obviously still swim very well. Maybe not to the level I did, but you know, for this game, you don’t have to do more than 25 yards at a time.

Of course, being in the ocean was just amazing!

I’m assuming, with my swimming background and knowing now that I was on the heroes tribe, that they put me on there for being the Olympian. I’m just thrilled that CBS and Survivor chose to have another Olympian, because they really haven’t had that many. I was kind of teasing Jeff, I said ‘It would be really cool to have a tribe of all Olympians.’

Q: That actually leads into another question I had. With the tribe designations this season, you’re on the “Heroes” tribe. What was your initial response to being labeled a hero right out of the gate in the game?

A: So, here’s what happens: We’re on the big boat with the food and you’re all on there, which is amazing in itself, it’s like a big pirate boat. And of course when the show starts, there’s gotta be 50 to 100 cameramen and -women filming stuff. And all of a sudden, boom, the game kind of starts. And Jeff says ‘OK, you 6 are heroes, and you 6 are healers and you 6 are the hustlers.’

And then he goes to our tribe first, and I won’t give away too much, but bottom line, he pretty much asked me right away, ‘Lady in the purple hat, what do think about being a hero?’ And he knew I didn’t want to bring up the Olympian stuff! (laughs). I’ll just leave it at that for now about what I do so I don’t give anything away, but I had to go through a quick moment of ‘what do I say?’

Because honestly, I’m not 20 and an Olympian. I’m 46. So before the game, I knew oftentimes if you are a pro athlete or an elite athlete, people don’t like that [in the game]. And so my intention, because I’m also a teacher and a coach, was to use those as my main thing that I do in my life.

So interestingly, you’ll just have to wait and see, I guess, exactly what I do. I will say that I was giving Jeff a pretty good glare at that moment. (laughs) They do keep you on your toes throughout the game. You don’t know when things are gonna happen and that’s the part of the fun of it all, honestly. Constantly having to be tested and being open to the unknown, staying open-hearted and not getting too closed and fearful about it all. I think that’s kind of who I am anyways, so it was really fun to be a part of that.

Q: A thing that swimmers and swimming fans can relate to is the moment before a race, when you’re sitting in the ready room – obviously you’ve been there. How does that compare to the moment before Survivor starts with the nervousness and the excitement in the air?

A: We arrive into Los Angeles and we’re there for a day. You’re basically sequestered, you’re not allowed to talk to anyone. Then you fly to Fiji. But we don’t know when the game is starting – could be 2 AM, could be in the middle of the day, could be tomorrow, could be five days from now.

So you know, a day goes by, and you’re seeing people, you’re hanging out but you can’t talk to anybody. And you can’t go exercise. They don’t want anything getting leaked ahead of time about who you really are. So I feel like that was our ‘ready room.’

And the ready room was awesome. I always used to love being in the ready room and just checking out where everyone else was at. If I felt like there was a lot of energy going on, I felt like I could get into my own little bubble, turn my music on, sing my songs. There was a part of me that loved walking onto the pool deck, especially if I was nervous, and feeling like I owned the place. Because I felt like if I could be in my own power and not get caught up in the other stuff that goes on around the pool deck, I could be good behind the blocks.

But out there it’s a little different, because you want to feel that confidence, but you’re with everybody else and you have to make sure it’s not seen.

Q: Anything else you want SwimSwam readers to know before the premiere next week?

A: I think they should just be prepared to watch an awesome show. The cool thing about Survivor is that it’s constantly evolving. They love to keep people wondering what’s going to happen.

The place that we lived, I loved being out there on the island. The ocean was so gorgeous and being able to wake up to the ocean waves everyday was one of the most beautiful and amazing things I’ve gotten to experience. I feel very blessed, very honored and humbled to be able to be on the show.

And all you swimmers out there who dream about being on something like that, you’ve got to apply! You’ve gotta go for it; it’s an awesome thing to be a part of!