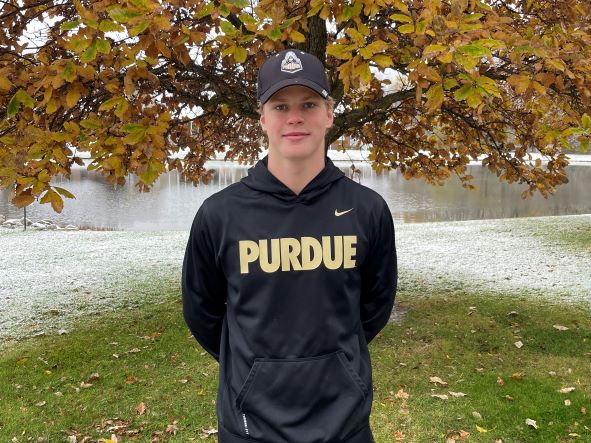 Making the decision to remain in Indiana for his college career, AJ Robertson of the storied Carmel Swim Club has announced that he will be joining the Purdue Boilermakers in the fall of 2023.

I am very excited to announce my verbal commitment to continue my academic and athletic careers at Purdue University! Thank you to my family, teammates, and coaches for all the support throughout my swimming career. Boiler Up!

Roberston has posted multiple lifetime bests at his two most recent meets. In December, he competed at the Winter Junior Championships-East in Greensboro, North Carolina. He qualified to compete in two events at the meet, the 50 free and 100 fly. After finishing the 50 in 21.59, he posted a lifetime best of 50.38 in the 100 fly. He followed that meet with a pair of best times at the Carmel Swim Club Winter Invitational a week ago. There, he picked up new best times in both the 200 and 400 IM, touching in the 200 in 2:04.30 and 4:17.01 in the 400.
Just under a year ago, he qualified to compete at the Indiana High School Swimming and Diving State Championships. At the timed finals-only meet, he finished in 16th in the 50 free, touching in 21.42.

Last season, Purdue was led to a fourth-place finish at the 2021 Big-10 Men’s Swimming and Diving Conference Championships by Nikola Acin. A sprint freestyler and member of the Serbian National Team, Acin finished the meet with a pair of A-finals appearances and a silver medal in the 100 free. In that event, he touched in a lifetime best time of 42.31. He went on to take another half of a second off that time at the NCAA Championships on his way to an 8th place finish.

This season, Acin has been joined by one of the top freshman sprinters in the country, Brady Samuels. An Indiana native like Robertson, Samuels has already been 19.58/42.93 in the sprint freestyle events. Samuels also boasts a 45.66 in the 100 fly that ranks him as the 15th fastest NCAA performer in the event this season. Robertson and Samuels will have two years of overlap beginning in the fall of 2023.

Purdue is coached by Dan Ross, who has been with the school longer than any current coaches and who currently serves as the dean of the Big-10 swimming and diving coaches. During Ross’s tenure with the team, the Boilermakers have been seen their greatest success on the diving boards, with David Boudia, Steele Johnson, and Brandon Loschiavo all winning NCAA titles in recent history.