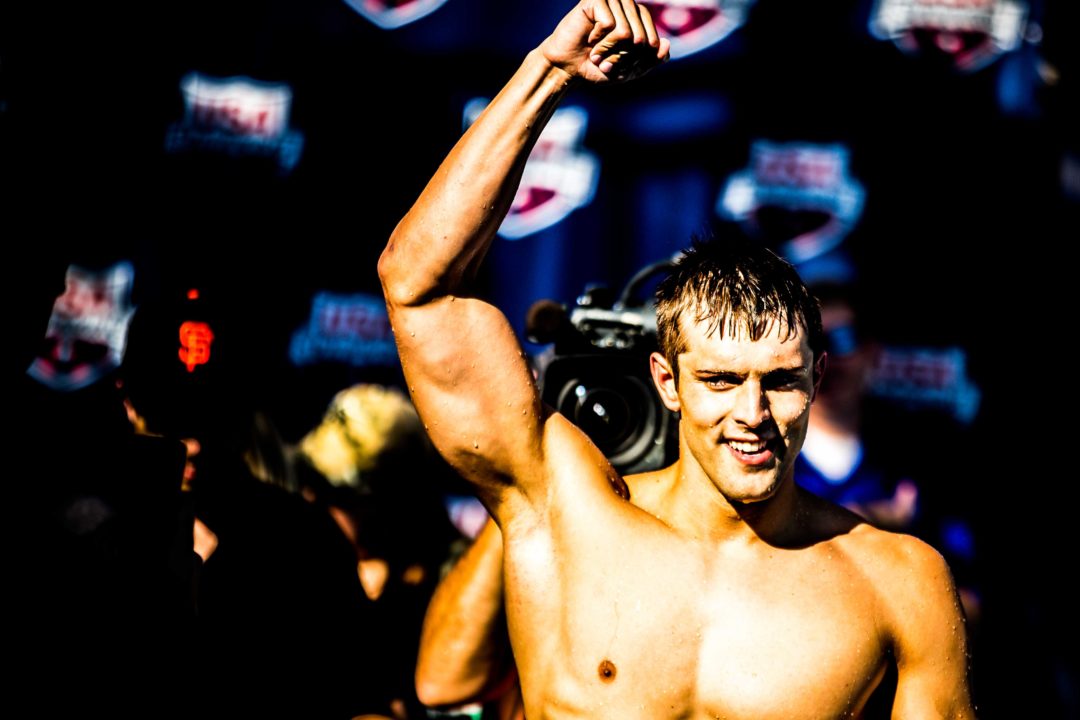 The meet will serve as one of the last high-level racing opportunities for American athletes before 2021 Olympic Trials this June. Archive photo via Jack Spitser/Spitser Photography

The fourth and final meet of the 2021 TYR Pro Swim Series is set to take place next week in Indianapolis, Indiana from May 12 – 15. The meet will be one of the final high-level racing opportunities for many US national teamers who will soon be making their bids for a spot on the 2021 Olympic team.

The field in Indianapolis will welcome in a similarly-powered field as the first three meets, though there are a few other meets, including the Atlanta Classic, that will divide some focus – as we’ve seen throughout this year’s Pro Swim season.

Among the big absences will be the Stanford women’s post-grad group that includes Olympic gold medalists Katie Ledecky and Simone Manuel. Manuel missed the last Pro Swim series meet with a non-COVID illness, and was expected to race in Indianapolis, but her coach Greg Meehan tells SwimSwam that the group has instead pivoted to a meet in Austin the following week. Meehan says the decision was on the basis of Austin offering an “easier environment,” including not needing to arrive early three days early to undergo COVID testing.

Manuel, specifically, has raced at only 3 official meets since March 2020, when the global coronavirus pandemic took hold.

Manuel’s absence leaves Mallory Comerford as the top seed. Comerford will be looking to pick up her first win of the 2021 PSS as Abbey Weitzeil, Simone Manuel, and Catie DeLoof took one gold each at the first three stops. Comerford’s season-best so far is a 55.21, giving her lots of room for improvement towards her PB.

In the men’s 100 breaststroke, we’ll get a look at an exciting matchup as Cody Miller and Michael Andrew go head-to-head. The duo holds the only sub-1:00 entry times as Andrew heads in with a 59.14 and Miller a 59.24, compared to Josh Matheny‘s 1:00.17 for third. So far at the 2021 Pro Swim Series, only one man has cracked the 1-minute barrier as Nic Fink posted a 59.74 to win the event in Mission Viejo. Cody Miller, however, has been a 59.65 earlier in the season to give him the second-fastest time among American men for 2020-2021 thus far, behind only Andrew Wilson‘s leading 59.58.

Another big name entered in Indianapolis is Regan Smith who is set to contest her signature 100 and 200 backstrokes in which she holds both world records (57.57/2:03.35). Smith is also entered in the butterfly double as second seed behind Kelsi Dahlia in the 100 and Hali Flickinger in the 200. The 100 fly, in particular, will be interesting as veteran Dahlie will look to fend off the likes of Smith, as well as budding NCAA all-star Kate Douglass who recently took silver at the 2021 NCAA Championships in the short course yards version of the event.

Men’s 100 Free gonna be an interesting one!!

Anyone know if Luca Urlando will be swimming in Indy? He seemed to be the only chance for a U.S. medal in the men’s 2fly in Tokyo, based on his 1:53.84 in 2019 (before his shoulder dislocation and before the Pandemic struck).

No, he’s racing at the Atlanta Classic the same weekend. https://swimswam.com/2021-atlanta-classic-dressel-g-walsh-uga-stars-highlight-stacked-psychs/

When is the olympic trials in the Us?

OK, are we going to see a rash of scratches on the last day? Being a pro means you show up. Should be some penalty for athletes who bail on last day

Also being a pro means you get paid for placing top 3 which they are not doing at this meet.

And here I thought being a professional meant you got paid for being a high level athlete, turns out you just need to sacrifice a day of training because some rando wants you to swim the sunday finals session instead of flying home early

Curious to see what Mallory Comerford does at this meet. She needs to drop serious time if women Want any chance whatsoever to beat the aussies

Don’t think she’ll make the relay even. She’s been off like Dahlia now

Hswimmer, Sometimes its better not to post what you are thinking… What events will you be swimming at trials or have you swum at this level? Two more swimmers just added to my list of ones I am pulling for!

Hahah right. It’s a swim site I’m sure there are non swimmers who comment on here like, wtf?

Agreed. Not well written on my part. Just thought the comment about those two girls was a bit out of bounds. Just because it’s a swim site and they are swimmers doesn’t make it right to come in here and anonymously wreck someone…

So saying someone won’t make the relay is “wreck”ing them? They’re pro athletes not children.

Damn, didn’t think an opinion on a pro athlete was wrecking them. I’m sure they know they’re on the outside looking in as of now.

How many times does it need to be said that you don’t need to compete at a high level in order to comment on athlete performances or be knowledgeable about the sport? And if they were a high level athlete swimming at that level would their comment all of a sudden be ok with you?

Mallory Comerford did not swim at the 2021 TYR Pro Swim – Mission Viejo in April. A number of swimmers were still in the doldrums in March.

A bit off-topic but the start list for the Sydney Open is up too. It’s the last racing opportunity for Aussies before trials.

Gretchen Walsh is signed up in Atlanta. Not sure on the other three.

Where is the Atlanta psych?

Hook is entered in Indy (2 fly, 2/4 IM), Curzan had talked about going to a local meet in Cary, NC. Not sure about Torri but she did just swim in the 18&U Cup

How did you know it since the psych sheet wasn’t published in NCAP page?

My daughter is her teammate. They are going to the NCAP meet.

To be fair, she could beat most dudes in the 200 back.