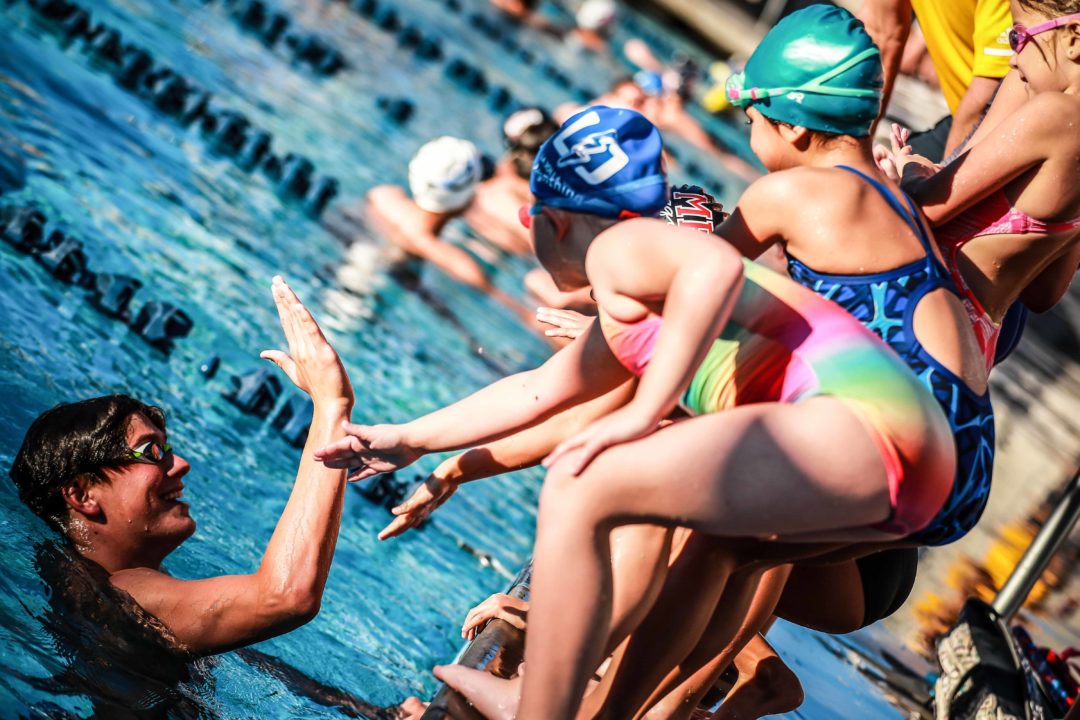 What do parents need to prepare for their child's first swim meet? Stock photo via Jack Spitser/Spitser Photography

When your child joins a USA Swimming Club and is placed in a team, expect to attend a “swim meet”, which is usually once a month and each swim meet usually last 2-3 days. It is basically an event where your local swim club and other swim clubs from the same LSC (still not sure what a LSC is? Check my earlier post here) “meet” and have their swimmers race against each other in various events. It also provides an opportunity for the swimmers to put into practice what they have learned during practice in a race format and to obtain official swim times for their events.

When I was growing up In Australia, some of the sports-related events were referred to as “carnivals” (e.g. athletic carnival, swimming carnival). Personally, I think the word “carnival” has a better (more friendly) ring to it and maybe we should look at adopting it in the US as well, especially for swim meets for the younger age group kids.

My eldest son was 9 years old when he went to his first swim meet in Texas and he was VERY nervous about it. I remember trying to comfort him by telling him that it was called a swim meet as people come together to “meet”, so he should not be too worried about the racing element or what position he finishes, but rather think about what time he can get. 6 years after that first swim meet, I still do believe that a young swimmer’s main focus in a swim meet should be about giving it their absolute best and trying to better his/her times in their events. Getting a new personal best time should be celebrated more than what place he/she finishes their race.

If you have never been to a swim meet before, here are some basic items you would need to prepare as a swim parent:

1. SHARPIE!  It would be best to write your swimmer’s events, heat & lane number on their arm. Do not expect your kid’s coach will be calling (or looking) for your kid to prepare for their race. At first, you will need to be aware which event is happening in the pool and get your child prepared for their event. As your child gets older and have had several swim meets under their belt, they learn to get ready in time on their own – but during the early years, you definitely want to be aware of what is happening in the pool and remind your child to get ready for their event.

2. LAWN CHAIRS. Not sure about the other States, but the swim meets I’ve been to in Houston, the set-up (waiting) area is generally outside the pool. So you will want to have lawn chairs to sit on as you will probably be there for 3-4 hours. For indoor pools, there is generally a spectator area with bleachers on the upper decks looking down into the pool. But they generally have very limited capacity and hence they are for temporary seating only for parents to watch their kids race their events. After your kid’s race is done, you are supposed to leave (so the other parents in the next heat or event can sit down to watch their kid’s race) & then come back later for your kid’s next event. It is not a good etiquette to “hog” or squat the bleacher seats for the whole session. If you’re in a much larger sized meet (e.g. Championship meets) where it is usually held in a larger sized Natatorium where there are plenty of indoor seats, then you can freely sit in the indoor seats without worrying about having an outdoor set-up.

3. Outdoor shade or pop-up tent/shade for your outdoor set-up area. You could get these from stores like Walmart, Costco or Academy. Or become good friends with someone who does have an outdoor shade!

The picture below shows a typical outdoor set-up area:

4. Snacks (for both yourself & the swimmer) & a cooler with plenty of water bottles &/or sports drinks. Most swim meet venues do have a concession stand, but it’s probably a good idea to bring your own drinks and snacks. My boys usually do not drink Gatorade, but they do bring a bottle of Gatorade during swim meets. Granola bars, protein bars, fruits such as bananas are also good snacks to bring.

5. Cash. Some venues only accept cash for their concession stands. You may also need some cash to purchase heat sheets (so you know which heat & lane your kid is racing) on the day of the meet. But these days, purchasing physical paper heat sheets are becoming things of the past as more swim meets now post virtual heat sheets on the “Meet Mobile” app.

6. Meet Mobile app. Probably the most common go-to app for swim parents. It provides meet results, heat sheets, the meet schedule & more. The free version does not provide meet results, so if you’re OK with that you can try the free version first. But once you become a long-term swim parent, you will need the paid version. I have the Android version and it is $6.99 for a 1-year subscription. More details of the app can be found at: https://www.active.com/mobile/meet-mobile-app.

7. Spare swim cap and goggles. Maybe even a spare swimsuit! Unfortunate or unlucky things do happen from time to time and swim meets are not an exception. Bring a spare of everything in case a goggle breaks or a swim cap tears.

8. Read the Meet Announcement document prior to coming to the swim meet.

9. Positive attitude and encouraging words. If it’s your first swim meet, it is most likely that your kid is more nervous than you!  Your child is going up on the diving blocks for their first race in front of a crowd. Be supportive and offer plenty of encouragement.

I probably have so much more to talk about swim meets, but will save it for another post. Until next time, keep on cheering for your swimmers!

David is an Australian who has been living in Houston, Texas since 2014. He is the father of two boys, and has been a USA Swimming Official since 2017. He describes himself as a “proud swim dad who initially had no idea of what it meant to be a swim parent”.