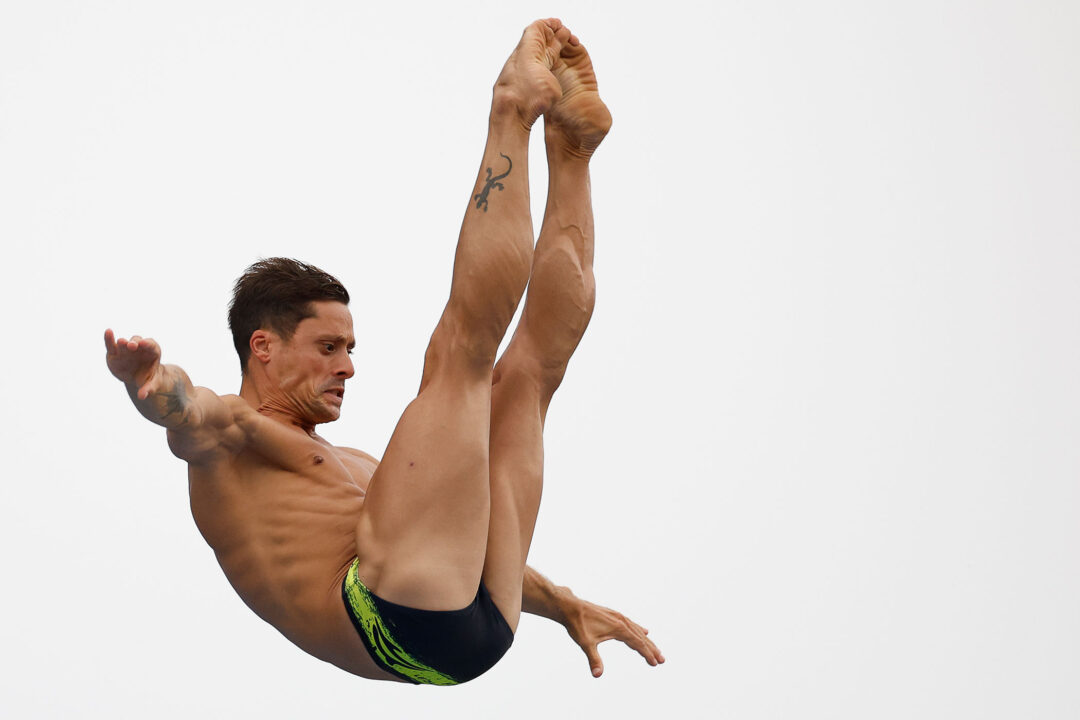 Now that high diving is featured in the European and World Championships, several medalists called for the discipline to be added to the Olympics, too.  Current photo via LEN

The first-ever European champions in high diving were crowned on Friday and Saturday in Rome.

Now that high diving is featured in both the European and World Championships (since 2013), several medalists called for the discipline to also be included in the Olympics in the near future.

The most recent World Championships in Budapest did not feature high diving, however, as no facility could be constructed on short notice. The action this week marked just the second time that high divers have competed on the FINA stage since the COVID-19 pandemic, with short-course Worlds last December being the only other occasion.

The Romanian duo of Constantin Popovici (455.70) and Catalin Preda (436.20) led the way in Saturday’s inaugural 27-meter final, with Popovici roaring back from fourth place after two rounds to take gold. It’s been a good couple weeks for Romanian Popovicis in Rome (no relation to David).

The victory gave Popovici his first FINA gold medal at 33 years old. A breakout performance appeared on the horizon last month when he triumphed at the Red Bull Cliff Diving World Series stop in Copenhagen, his first win in three years.

Popovici delivered a 6.0 difficult dive on his final attempt, earning 8.0s and 8.5s en route to an evening-high 147 points that clinched the title.

Rounding out the podium was a local standout in Italy’s Alessandro de Rose, who surged back from fifth place at the halfway point thanks to the highest-scoring dive of the final round.

“This gold is very special to me,” said Popovici, who became the first Romanian to earn a first-place finish at a stop of the Red Bull Cliff Diving World Series in 2019. “I was the best one today. I always feel a lot of pressure every time because my dives are always very hard. I focused a lot and today I did my best dives. I have known Alessandro for 10 years and Rome has been in my heart since the 2009 Worlds when I competed in the 10m platform. I am not too emotional right now, too much adrenaline, still but I am happy to have made history today. Our sport is growing year after year, we even have junior competitions now so the next step should be the Olympic games sooner or later.”

Preda echoed his countryman’s sentiments, advocating for high diving to be added to the Olympics.

“It was historic, the first edition of the Europeans and it was absolutely awesome,” Preda said. “I am happy to have been a part of it and to have felt the energy of the crowd. This was a nice setup. It is promising and great for promoting our sport. We have the Worlds and now the Europeans, the Red Bull is also expanding so the Olympics would be a natural progression hopefully as soon as possible.”

After beating out 38-year-old Gary Hunt for the final spot on the podium, de Rose credited his team while giving a nod to the veteran from London who now represents France in international competition.

“This title gives me very strong emotions and what I want to say is that this is not my medal,” de Rose said. “I owe it to the whole Italian Federation, to our team manager Markus Stuppner, who believed in this project, to the staff and to Oreste Varese. We wouldn’t be here if it weren’t for him. This is not an individual title, but the title of a whole team. Gary (Hunt) is a very strong opponent, he rarely makes mistakes, so this medal was completely unexpected.”

On Friday, Germany’s Iris Schmidbauer (309.30) rallied past Italy’s Elisa Cosetti (295.40) during the final round to become the first winner of the women’s 20-meter high dive. Schmidbauer’s 4.4 difficulty dive on her last attempt was the highest of the competition.

“I was hoping for a medal — I mean, who doesn’t want to make history at the all-time first

European Championship?” said the 27-year-old Schmidbauer. “It’s insane. I also find it really cool that it was eight of us, from so many different countries. It’s good to be more and more in this discipline, it’s becoming official and now let’s hope to be at the Olympics in the future!”

Ukraine’s Antonina Vyshyvanova was in fourth place headed into her final dive, but she scored a near-perfect 94 points to claim silver in clutch fashion. Germany’s Anna Bader, bronze medalist at the 2013 World Championships when high diving debuted in Barcelona, only tallied a 62 on her final dive and missed the podium in fourth place.

“It’s pretty wonderful to have the high diving at the European Championships,” Vyshyvanova said. “We all know each other very well, so this is not a new thing for us, it’s like a World Cup. This pool is amazing, the atmosphere is incredible, so I’m really happy that I can be here. It was a great competition, I’m very happy with the silver medal.”

Cosetti, the youngest in the field by almost four years, said she was more than satisfied with her result despite some nerves catching up to her during the final round.

“This is the first medal for Italy in high diving at the Europeans,” Cosetti said. “I am more than satisfied. I was ranked first until the last dive but it is still OK. Yes, I did make a mistake but I truly gave everything I had in me today. I would like to thank Alessandro and Nicole, who is my coach, the whole team, the Federation and of course my family. I became interested in high diving watching Alessandro de Rose and now his wife Nicole is my coach. The adrenaline is always there, especially in this sport but even more so today. My legs were trembling while doing the last dive.”

Due to the extreme demands of high diving, all entrants received prize money as opposed to the typical top-three finishers.

Touché swimswam. Touché. Got me with that headline. Popovici must be a common last name in Romania.

What can’t the Chlorine Daddy do??

Popovici and Paltrinieri in the same paragraph had me salivating, what happened? 🤔

“Popovici delivered a 6.0 difficult dive on his final attempt, earning 8.0s and 8.5s en route to an evening-high 147 points that clinched the title.
Open water
Gregorio Paltrinieri and Domenico Acerenza picked up everything where they had f”

At any rate, we need this kind of talent on the UT men’s diving and swimming team. 🤘

Nice job with the title.

You got me reading the article which otherwise I wouldn’t have.

Man this Popovici kid can do everything