Pool Indoor Air Quality: Why It Matters to Your Health and Performance (PART 2) 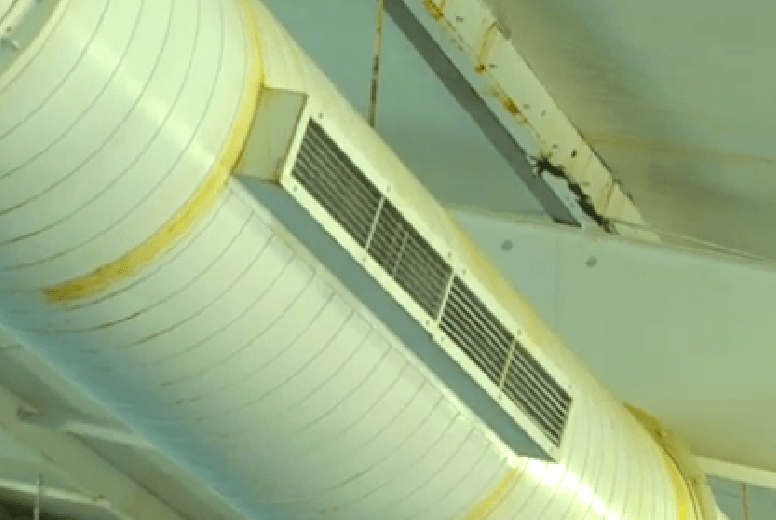 Mixing air causes corrosion in higher parts of the building, including the roof. This is usually the cause of a breeze or draft on a pool deck. This effect spreads bad air all over the place, and is intensified by the use of large fans. Look for rust around your pool. If you see any on metal components in your roof, chances are, there is mixing going on. Current photo via Paddock

Air quality and its known health effects have garnered the attention of the World Health Organization (WHO) and US Centers for Disease Control (CDC). All of the information contained in this article is accessible online through credible resources, and we encourage all of you to research these topics on your own so that we can, together, keep our sport as safe and healthy as possible.

In our last article, we discussed how pool water chemistry and swimmers contribute to indoor air quality problems.  Quickly, to recap: chlorine cleans the pool by oxidizing organics, and the result is disinfectant byproducts (DBPs)—the primary type being chloramines.  Chloramines off-gas into the air and when they do, they stay low, right above the surface of the water in the “breathing zone.”

Chloramines are in the air, now what? At this point in the process, chloramines need to be dealt with as an air issue.  To be clear, water chemistry still affects the production rate…but once airborne, trichloramines are not affected by the water chemistry anymore.  So, for this article, our focus is on the natatorium and its air—not the pool and its water.

So here’s what we know: every natatorium is unique, and so is each air system.  As you can imagine, there is a wide variation in air quality, which explains why some pools struggle, and others are seemingly fine.  No matter what type of air system is used, here’s a short list of factors that make a big impact:

Remember, the air we breathe is causing that rust. Imagine what is does to our lungs.

1) Short circuiting is when air is supplied into the natatorium and fails to reach much of the room because it shortcuts back into the return vent beforehand. This can be caused by a poor duct layout (i.e. high supply and high return), or by an under-designed HVAC system.  This effect creates voids in air flow, or “dead zones.”  What do you think is the most common dead zone in a natatorium?  You guessed it: the surface of the pool itself…the breathing zone.

2) Excessive mixing is the opposite of short circuiting, when air flows too fast and mixes everything up, especially airborne contaminants like chloramines.  This is usually caused by too high of a turnover rate, which forces air to move too fast in the space.  This is usually the cause of a breeze or draft on a pool deck, where swimmers get really cold.  This effect spreads bad air all over the place, and is intensified by the use of large fans.  Look for rust around your pool… if you see any on metal components in your roof (support beams, lights, etc), chances are, there is mixing going on.

In either case, if your pool has a recirculating air system, chloramines will recirculate and the problem builds upon itself; with each cycle, the air quality gets worse and worse.  HVAC systems typically exhaust 10-25% of their recirculating air, and replace it with outside air.  That means about 75-90% of the indoor pool’s air goes right back into the pool.  HVAC systems are not designed to eliminate airborne contaminants like chloramines—that is, unless they incorporate a source-capture system.

If there is rust inside your pool’s HVAC system, that proves

chloramines are being recirculated.  It’s only a matter of time before a component (or the entire system) needs to be replaced.  Think about that for a second.  Chloramines corrode and destroy metal—what does it do to us?

To recap, airborne chloramines off-gas from the pool and get trapped inside the natatorium, recirculate and spread around, and have no place to go.  This is why swim meets tend to get worse as the meet progresses.  Even overnight, those airborne chloramines are still trapped in the natatorium.  Combine that with the increased production rate of a heavy bather load, and it’s a recipe for problems.

Perhaps, as pool users, we should focus less on the problem, and more on the solution.  When we accept that chloramines are always being produced, the question becomes “now what?” instead of “who’s fault is this?”.  If you think the issue can be ignored, just wait until you learn the costs of having bad air…it is an unbelievable burden placed on the owners and operators of swimming pools.  The numbers are staggering.

We are swimmers and swammers, just like you, who have suffered through bad air quality for countless years.

We know how miserable an indoor pool can be during swim practice or a meet, because we’ve lived it.  It is personal to us, and we have devoted our careers to not only educating the swimming community about air quality, but actually solving the problem.  Our mission is to make the indoor pool a healthy, desirable place to be—not just a tolerated amenity.  More at www.paddockevacuator.com.

I go to a YMCA for water exercise and lately I noticed a burning sensation when I breathe the life guard opens the outside door and the door to the lobby with air conditioning she says she is too hot but I was told by the man that was installing the new air system that the doors should be kept shut so the air quality will be better would this cause breathing problems? we have ask them to keep the doors shut but the lifeguards still open them I was just wondering if this can cause breathing problems I am in the water a couple of hours each time I go

at the moment the motor has broken to the air circulation unit and all the windows have been steaming up it feels damp and as teachers we are on the pool for up to 3 hours at a time some days our eyes are itching is this legal ?

I’m glad I came across this. My teammates and myself keep getting sick from the cumunity center pool we swim at. I seem to get it worse than anybody and it’s really been affecting my training. People say the air circulation at the pool is bad, and the pool is definitely not colder than the air, the pool is in the high 80’s. it’s a community center pool, so it’s probably also high in chlorine. What could I ask the community center to do?, even small things like the tempature of the pool, that might make a little difference.

This is pretty complex stuff. Thanks for explaining with visuals. So can someone please tell me what the problem is at IUPUI? My kids get sick there every meet, and its always from bad air. Coughing for days and days… I hate it and I hope USA Swimming does something about putting nationals and grand prix meets there. It’s crazy that we willingly put our kids in harms way with this problem, by hosting meets in places with horrible air. Am I alone in thinking this?