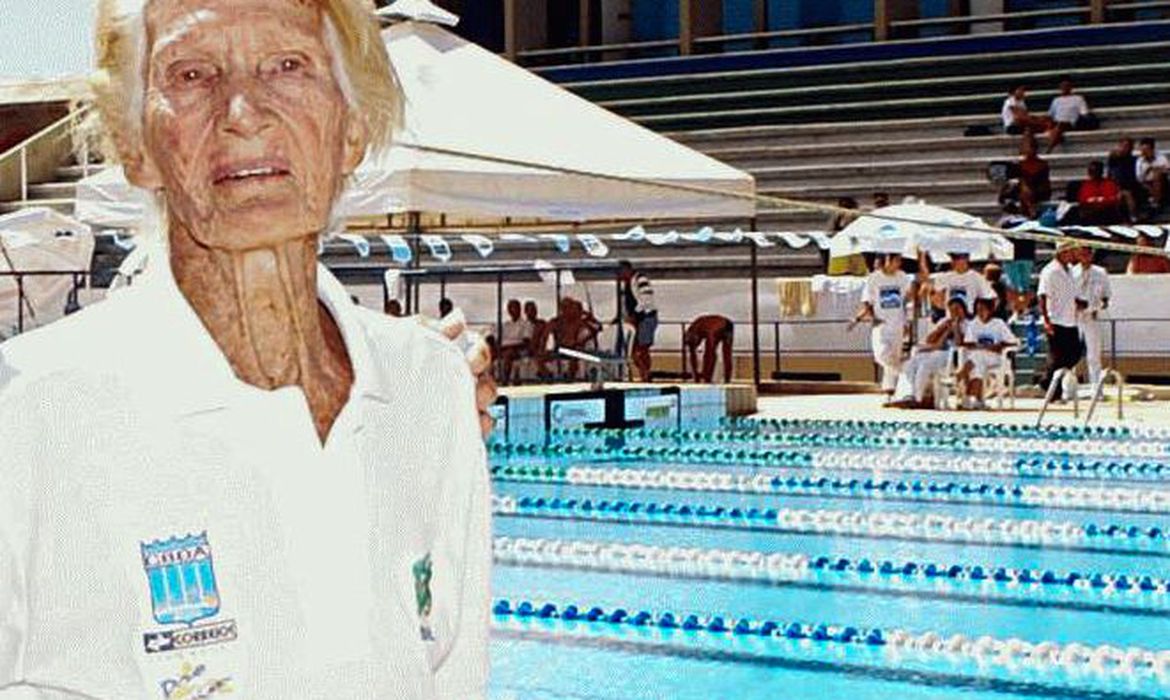 Brazilian Swimming declared Maria Lenk its patron for her swim achievements and revolutionary experimentation with the breaststroke's mechanics. Archive photo via Agencia Brasil

Lenk was born and raised by her German immigrant parents in São Paulo in 1915. After surviving a double lung disease at the age of 10, Lenk strengthened her lungs by swimming in the Tietê River under her father’s supervision. Seven years later, the young star became the first Brazilian and South American woman to compete in the Olympics. At the 1932 Los Angeles Olympic Games, Lenk was the sole woman bearing Brazil’s flag alongside 82 male athletes in the delegation. Her participation in the pinnacle of sports competitions inspired Brazilian women to follow in her footsteps. At the 1936 Berlin Olympics, five women accompanied Lenk – four of which were swimmers – to represent Brazil on the world stage.

At the 1936 Olympics, Lenk became the first woman in the world to perform what is now known as the butterfly stroke during the semifinals of the 200 breast. Though the origins of the arm stroke are murky, American Henry Myers is said to be the first ever to perform the butterfly stroke’s recovery phase in competition, which was seen in 1933. An increasing number of coaches and swimmers then began to realize that the breaststroke’s recovery phase underwater was much slower than out of the water. Lenk is now considered a pioneer in the development of the butterfly stroke.

Lenk never earned an Olympic medal during her career even though she showed strong potential approaching the 1940s. In 1939, she became the first South American woman to set world records in the 200 and 400-meter breaststroke events. Due to World War II causing the cancellations of the 1940 and 1944 Olympics, Lenk did not get another chance to bring home a medal.

Nonetheless, FINA recognized her achievements in the pool in 1988 by inducting her into the International Swimming Hall of Fame as an Honor Swimmer.

She continued to swim into her elder years and set five Master World Records in the breaststroke events. She set four of these records in 2005 – two years before her death at 92. During her entire swim career, she swam for the same Flamengo sports organization.

Her successes and dedication to swimming for Brazil have been honored by her home country. Following Lenk’s death in 2007, the mayor of Rio de Janeiro, César Maia, renamed the new Aquatic Park venue the Maria Lenk Aquatic Center. That same venue hosted the aquatic events for the 2016 Olympics. Her name was also added to Brazil’s national championship meet for club teams, which is called the Brazilian Swimming Trophy – Maria Lenk (formerly known as Maria Lenk Trophy).

Lenk’s contributions to the sport of swimming and her image as Brazil’s Olympic heroine will long be honored under her title as patron of Brazilian Swimming. As a patron, she serves as a symbol of strength and fearlessness for Brazilian women in sports.