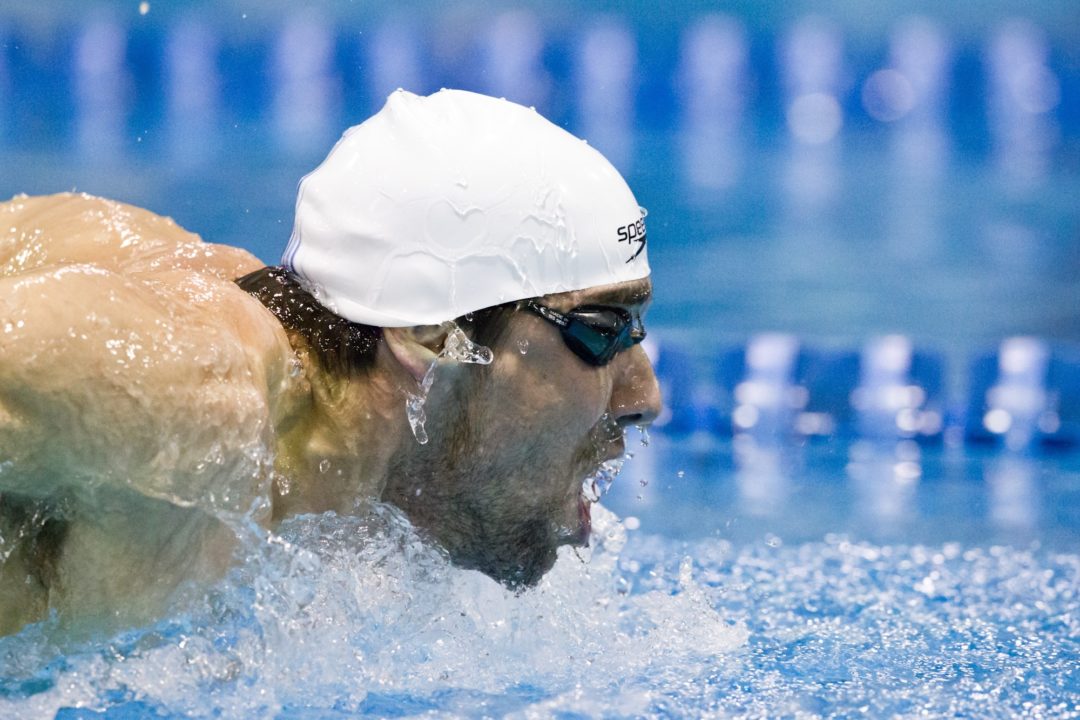 Michael Phelps is still seeking individual gold at this meet, and enters still as the favorite in the men's 100 fly. (Photo Courtesy: ©Tim Binning/TheSwimPictures.com)

The prelims on day 6 of this meet will see the fastest-of-the-fastest on the men’s side take on the 50 free, but also has the longest race on the women’s side in the 800 free. We’ll see American sensation Katie Ledecky in that 800, along with Kate Ziegler and defending champion Rebecca Adlington – Britain’s best chance at gold at this meet.

Michae Phelps also begins the preliminary rounds of the 100 fly, which is the 5th and final shot at a men’s three-peat, which is something that still has not ever been accomplished in Olympic swimming.

George Bovell’s decision to scratch the 100 free and focus strictly on this 50 paid off in the prelims, as he posted a 21.77 for the top seed. The Trinidadian sprinter, once an Olympic medalist in the 200 IM, is the 4th-best in history, and though he couldn’t match that time here, he does move to 7th in the world.

The two Brazilians sit close behind him with a 21.80 from defending World Champ Cesar Cielo of Brazil and a 21.82 from his understudy Bruno Fratus.

In all, just 6 men were sub 22-seconds in this opening round. That includes American Anthony Ervin in his meet debut with a 21.83 for the 4th seed, and South African Roland Schoeman breaking through for the first time this season with a 21,92. The 6th seed will be American Cullen Jones, who in his 100 freestyles thus far have looked great for 50 meters: a good sign for this race.

Among other finalists include both Australians (James Magnussen and Eamon Sullivan), France’s Florent Manaudou, Gideon Louw, and Canadian Brent Hayden. All of those men were between 22.0 and 22.2. The biggest misses include Great Britain’s Adam Brown in 22.42, Sweden’s Stefen Nystrand in 22.32, and France’s Amaury Leveaux in 22.35. This was the 4th Olympic Games for the 30-year old Nystrand.

Katie Ledecky, the youngest member of the U.S. Olympic Team at 15, was fantastic at the US Olympic Trials in late June. She was fantastic again here in the opening round of the 800 free in an 8:23.84, but she is up against a different class of swimmer in London. That swim will leave her with the 3rd seed headed into finals.

As for Adlington’s swim, it was a good warm up though she would be disappointed if not at least an 8:18 in finals. The crowd roared like they haven’t yet in a preliminary round at the London Aquatics Centre when Adlington took the pool, and she rewarded them by taking the top spot headed toward finals, which won’t be held until Friday night.

For Pinto, that makes her the first ever Venezuelan under 8:30 and crushes her own National Record. She trains in the United States with Gregg Troy and the Gator Swim Club; she’s been having a fantastic season as she climbs into the national view, but really kicked things into a different gear in this race. Balmy has had a great meet, but normally stumbled with a slowish back-half of this 800.

Both Chinese swimmers, surprisingly, missed, topped by Yiwen Shao in 9th in 8:27.78. They have had an extremely up-and-down meet this week. Spain’s Erika Villaecija-Garcia was 10th in 8:27.99. Canada’s Alexa Komarnycky struggled at Trials, but seems to have shaken off her funk and went a best time here of 8:28.11 for 11th place. That makes her the 2nd-fastest Canadian in history.

American Kate Ziegler was 21st in 8:37.38. She’s been battling the flu this week, and added more than 15 seconds from Trials.

Chad le Clos has really improved his speed and looked quite good in the prelims of this 100 fly after his upset in the 200. He will take the top seed into tonight’s final in 51.54. That’s a best time by half-a-second and a new South African Record. He was to face the same double tonight as will Michael Phelps, the 2nd seed in 51.72, but le Clos scratched the 200 IM without much of a chance at a medal.

There were no really huge misses for this final, though a few small surprises. Japan’s Takuro Fujii was only 21st in 52.49; however his teammate Takeshi Matsuda tied for 16th in 52.36. Matsuda declined the swim-off, leaving Germany’s Benjamin Starke in the semis, but that will make Japan feel much more cofnident in their medley relay choice, where Matsuda is expected to swim fly and Fujii the freestyle anchor.

The two Americans Missy Franklin and Elizabeth Beisel took the top two seeds in the prelims of this 200 back in times of 2:07.54 and 2:07.82. As the winners of the two fastest heats, they swam very similar races, and were the best of what was a terribly slow preliminary round – it took just a 2:10.60 to make the semifinals.

That slow heat worked to the favor of the Netherlands’ Sharon von Rouwendaal, who grabbed that final slot. She was the bronze medalist at Worlds last year, and there are high hopes for her to at least repeat that this year.

The third seed behind the pair from the United States is Zimbabwe’s Kirsty Coventry in 2:08.14 – shooting for what would be an Olympic three-peat for her. The two Aussies Meagan Nay (2:08.40) and Belinda Hocking (2:08.75) are juts behind.

All of the big names were safely through, and we’ll be hoping for some more notable times in the semis.

Braden, I guess it’s you and me here again this morning! I want to thank you for the wonderful coverage you guys here at SwimSwam have provided of the Olympic swim meet. You have improved my enjoyment of the swimming competition 100 fold. Unfortunately, I’m not doing too well in the picks competition, but that’s another story…

No problem! We appreciate you getting up with us! If we’re helping people enjoy the sport more, then mission accomplished.

Glad to see Ervin and Jones came through the 50 heats with no problems.
Katie had a very nice controlled swim this morning. Go Katie! Kate looks to be in real trouble — what is up there?

Good question re: Ziegler. I thought she still had much more to give after Trials.

Yeah, this has been an exhausting meet for us east coast fans (not sure where you are), but I would never forgive myself if I missed one minute of the swimming! The US team is doing so great! Everybody has been making finals, lots of best times and medal-worthy performances! I just hope Phelps and Lochte and Franklin, etc, can hold it together for a few more days!

I’m sad for Ziegler! I thought for sure this Olympics would be very good for her.

I guess having the OT so close to the Olympics wasn’t good for distance swimming when you can’t recover like a 15 year old. I hope the men won’t have the same problem in the 1500!

Indeed — working every Apple product I have to keep up with the live feeds and so grateful for whomever puts up the BBC feed info in the comments for each of the finals sessions (since the NBC feed seems to be blocked at work.) Just hating NBC for a) not showing the sessions live and b) only showing parts of each finals sessions during the prime time coverage in the morning.

And Kate Z’s time was 8:36, I believe. Something was way off there. I am very sorry she had such a poor swim. She looked so strong at trials.

Good start for McGill! Let’s hope he can continue to improve in the semi’s!