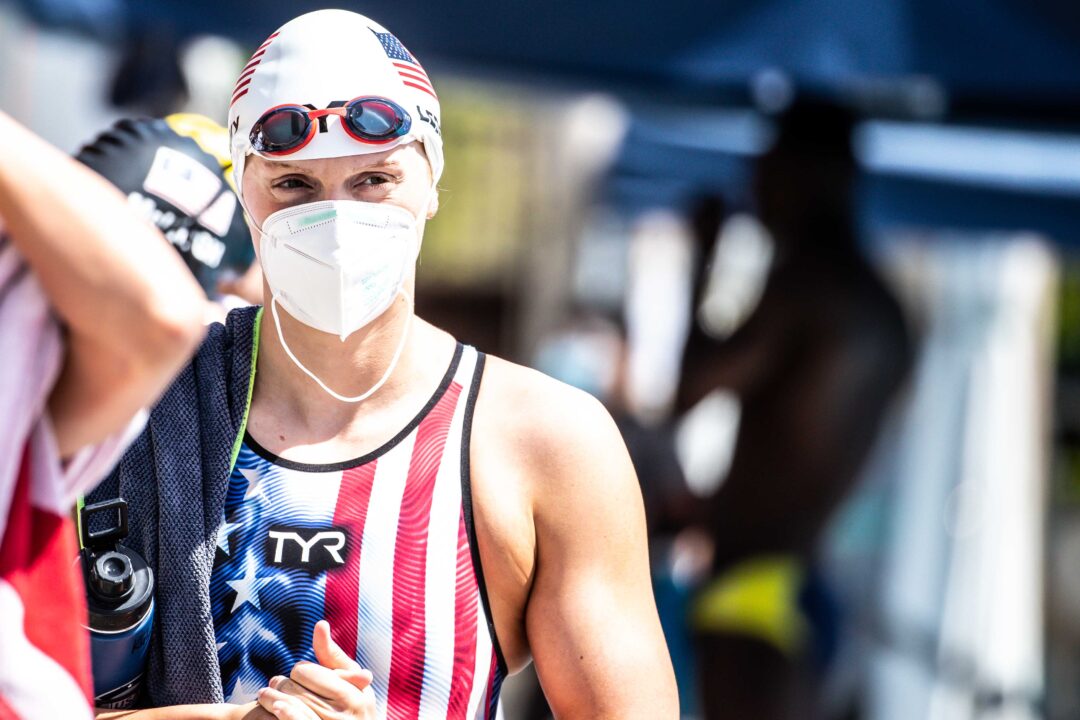 Katie Ledecky last set the World Record in the 800 freestyle in 2016 at the age of 19. She would be making history if she breaks it again. Current photo via Jack Spitser/Spitser Photography

Katie Ledecky has already achieved enough in her illustrious swimming career to achieve all-time legend status. Even if she never won another race in her career, she would still be spoken of for generations among the greatest to ever dive off a block..

There are few standards by which Ledecky’s age of 24 is considered “old,” but by the historical standards of World Record-setting women’s distance swimming, it is just that. If Ledecky goes a best time again in her specialty event, the 800 free, it would, in fact, be historically old for her to do so (being that those best times would also be World Records).

Ledecky first came on the scene at the 2012 London Olympics with an upset victory in the 800 free over the defending Olympic champion Rebecca Adlington. At 15 years old, she was one of the youngest swimmers in London and would set her first world record in the 800 a year later at the 2013 World Championships with a time of 8:13.86. Over the next three years, she would break the record four more times, bringing the current record down to 8:04.79.

Ledecky’s 8:04 came at the 2016 Rio Olympics and was notable because she set that record at the age of 19. Why is this notable? Because it has been nearly 68 years, yes 68 years since a non-teenager has set the world record in the 800 freestyle.

Time to check to see who knows their swimming history. We have to go all the way back to 1953 and Valéria Gyenge of Hungary to find the last time a non-teenager set the record. Gyenge swam 10:42.4 on June 28, 1953 at the age of 20 years and 86 days to break the 12-year old record of 10:52.5 from Ragnhild Hveger of Denmark. Coincidentally, Hveger was 20 years and 246 days when she set the record.

For those who had Valéria Gyenge on your bingo cards, please stand up.

Since setting the current record at the 2016 Rio Olympics, Ledecky has swum the 800 free 19 times. Her fastest time during that span was  8:07.27 in May 2018 at the TYR Pro Swim Series in Indianapolis. Her slowest time was 8:20.24 at the 2017 World Championships in Budapest where she took gold.

We all know that Katie Ledecky is currently the greatest female distance swimmer and has transformed the limits of the events she swims. We also know that female swimmers, particularly distance swimmers, tend to peak at younger ages. At the same time, the sport is significantly more professional than it has ever been and we’ve seen both men and women swim fast through their 20s and into their 30s.

At the Longhorn Invite, Ledecky finished first in the 100 free in 53.83, edging out Simone Manuel by .01 seconds. This was Ledecky’s second fastest flat-start 100 free ever, just behind her 2016 PSS Austin swim of 53.75. Between the 100 and 200 times this spring, Ledecky’s speed is right where she needs to be.

We also know that Katie Ledecky is extremely goal focused. Prior to Rio, her goals were to win the 200 free (check), swim under 3:56 in the 400 free (check), and to swim under 8:05 in the 800 free (check). While we do not know her goals for Tokyo, with her training acumen, and focus on goal-driven results, if she has a chance to make history, it will be hard to bet against her.

If Ledecky goes on to set a new world record in the 800 free, it will be a truly historical feat. All the historical data shows that the 800 free is an event dominated by teenagers. It is not unreasonable to suggest that Ledecky has swum her best time in the event.

‘Historical feats’ and ‘rewriting the rules,’ though, is what Ledecky has done throughout her career. For her to do so again shouldn’t surprise anybody at this point, but it would highlight another chapter in her legacy in the sport.

Ledecky will win gold medals in the 400, 800, and 1500, but will not improve her PBs in those events. She will improve her PB in the 200, and will likely win the gold medal in that event as well. I believe the 200 is the toughest one, requiring very little margin for error to win, and will be the event she’s most focused on. I would not be surprised if her goal time is under Pellegrini’s WR set in Rome during the super suit era in 2009.

here is what will happen in Tokyo (or anywhere), she will swim a 20-30-40 meters ahead of the pack, the camera will show her from 3 meters from above, front, side for 90% of the time and we will have no idea about the rest of the race

I believe I was the first one to point this out several years ago in the comments, that only teenagers break that 800 record. I went back and specified similar to the author of this article. The Janet Evans example is what caused me to look it up decades ago. Commentators in 1988 were touting her to be even faster in 1992. The record book did not support that and it was simple to identify age as the criteria.

Ledecky looks great this year, far better than I expected. But I believe there will be at last one race in Tokyo in which she tightens up late and falls shy of expectation. That is very standard for a female… Read more »

Katie Ledecky could post a 8:10.63 in the final of the women’s 800 meter freestyle at the Tokyo 2021 Olympics and still win by four seconds.

I would love to see her race against the men while fully tapered to see how fast she can go. She has no challenger in the 800. I think she can definitely break 8:04 if pushed.

Until recent times, the re were no “pro” opportunities for swimmers – one has to wonder what great swimmers of the past would have done if they had the opportunity to continue to train and compete into their 20s – Tracy Caulkins, Shirley Babashoff, Shane Gould, Janet Evans, Dawn Fraser, Debbie Meyer. Without intending any slight to Katie’s accomplishments, absent the doping by East Germans and with today’s college and pro opportunities, I suspect that one of these women would have accomplishments that match or exceed Katie’s.

Some of the swimmers you mention are not the best support for not the competing into their 20s argument. Dawn Fraser was 27 when she won gold in 1964. Janet Evans swam into her mid 20s. Shane Gould certainly was a great talent but didn’t retire due to lack of opportunities. Of course as you say she would have faced the Blue Pill circus had she stayed in the sport. But even if the GDR wasn’t a factor she and Babashoff swam the same events so either one of them having a dominant run over the other is far from guaranteed. Caulkins, like Mary T. was more affected by the boycott than lack of opportunities, meaning they had one less… Read more »

Great analysis. I think we have to stop comparing incomparable thing. The conditions of current competition to something that occurred half of a century ago or even later.
The question if there are some biological factors that stop to play for long distance swimmers after they go in their twenties is in interesting one. But nobody mentioned yet what they are. Without understanding the biology the historical statistics should be used very carefully. And one more thing. The nature of any statistical analysis is averaging. Katie Ledecky’s biological gift is far from being average. So it would be hard to say if all these references to historical data are applicable in her case.
In 2016 Olympic cycle there… Read more »

If I remember correctly her goal in Rio was secretly coded “564”. She kept it visibleat any practice. It 3:56 in 400 and 8:04 at 800. The origin of this target was simple: starting new Olympic cycle she wanted be 1sec faster at each hundred meters of the distance.
I think that preparation for the Olympic Games in Tokyo is different. She wants to compete from 100 through 1500 and win gold medals from 200 through 1500. Records , most likely, are secondary in her plans. She focuses on sprint were she meets the most challenge and long distance will be swam just for the win.