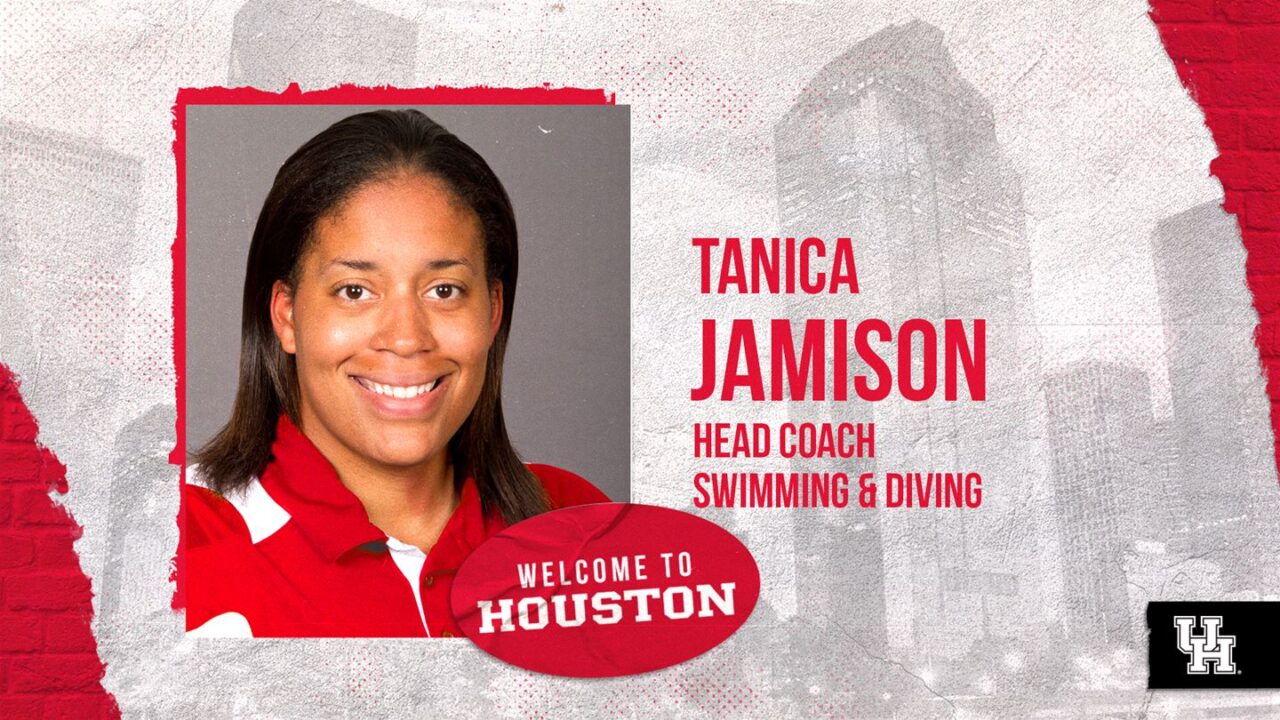 The University of Houston has hired Tanica Jamison as the program’s new head swimming & diving coach, adding a standout coach of ten years at Texas A&M.

Jamison has been with the Texas A&M women’s program since 2011. She was promoted to associate head coach in 2016 and helped the Aggies finish 3rd at NCAAs in each of her first two seasons in that associate head coach role. Over her ten seasons with A&M, the Aggie women put up seven top-6 team finishes at NCAAs:

Jamison’s run with the team coincides with the most successful stretch in Texas A&M women’s swimming history. Prior to Jamison’s arrival, A&M had just two top-6 NCAA finishes in team history – a 4th-place showing in 2008 and a 6th-place in 2010. The Aggies also moved from the Big 12 to the SEC in 2012-2013, and won four consecutive SEC team titles from 2016 to 2019.

As an athlete, Jamison was a two-time NCAA champion and 11-time All-American at the University of Texas in the early 2000s. She spent time coaching at the University of Pittsburgh before her decade-long run in College Station. Texas A&M’s women’s and men’s programs have separate coaching staffs. Jamison coached the women’s team there and will now continue to coach women at Houston, which does not have a men’s swimming & diving program.

The Houston women were in search of the eighth head coach in program history after Ryan Wochomurka took the head coaching job for women and men at Auburn University, his alma mater. In his six seasons with Houston, the Cougars rose from 6th in the American Athletic Conference to winning five consecutive conference titles from 2017 to 2021.

Jamison will inherit a roster that graduated both of its 2021 NCAA qualifiers (unless senior co-AAC Swimmers of the Year Mykenzie Leehy and Ioanna Sacha choose to take a fifth year of eligibility), but returns conference Freshman of the Year winner and two-event conference runner-up Laura Garcia Marin.

Congratulations! And her resume should include that she was great on Wheel of Fortune. Congrats to a former Bay Area age grouper!

This is a REALLY great hire for the program.

Way to go Coogs!! So excited for us and for Tanica-great hire Coogs 💪🤩

Great person, great hire!!!!! Tanica has deserved her own team for a long time. This will be a great stepping stone to the Power 5 job she is cut out for.

She has 10 years more experience than the Alabama hire and deserves the job. Not because she was a great swimmer, not because she is a women, because she has proven she can do the job. The AD at Houston has done their job and hired the best available person.

WOW. Great hire. I’m shocked A&M let her get away. I assumed she was Steve’s successor. Isn’t he close to 70 or more? I assumed he was done after this Trials.

Give her the “Buck stops here experience” and bring her back at retirement. This is a great hire for Houston.

Tunica is from Houston and still has family there. She will be a better “potential next HC at A&M” with this experience. And Steve is a young 70 and not slowing down. Great hire by Houston.