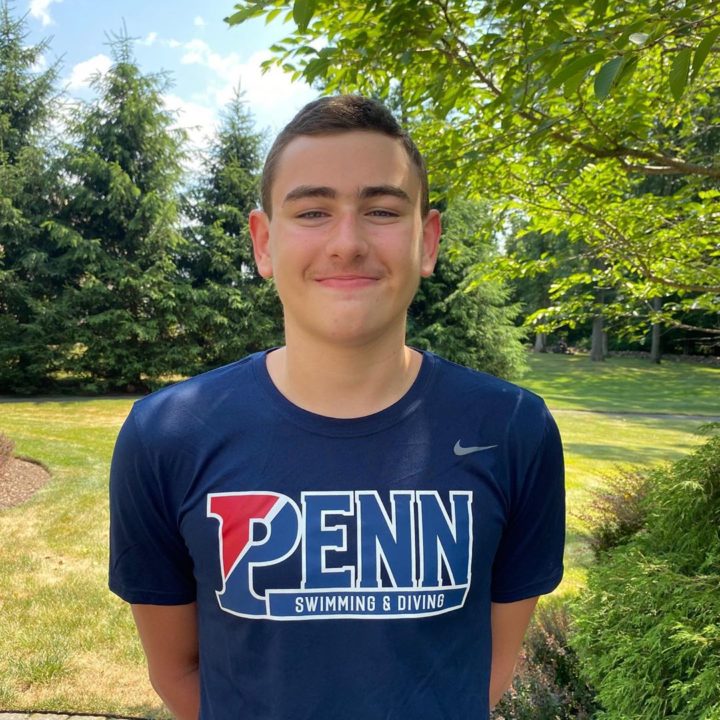 Fallon excels most in breast and IM; he's the #1 400 IMer in the entire high school class of 2021 and the #2 200 breaststroker in the class. Current photo via Matt Fallon

In an Instagram post this afternoon, Somerset Valley YMCA’s Matt Fallon announced he has announced his verbal commitment to the application process* at the University of Pennsylvania for 2021-22. Fallon is the #8 recruit in the class, making this a massive pickup for the Quakers.

Per his Instagram caption, he’ll be studying at Wharton, Penn’s business school. He joins his older brother Billy Fallon, a rising junior on the Penn swim team.

I am thrilled to announce my commitment to swim and study at the University of Pennsylvania! I chose Penn because of its fantastic swimming program and because I will have the opportunity to study at the prestigious Wharton School. I want to thank my coaches, friends, teammates and especially my family for all of their help and support. Go Quakers!

Fallon excels most in breast and IM; he’s the #1 400 IMer in the entire high school class of 2021 and the #2 200 breaststroker in the class. He also would’ve been invited to the 2020 NCAA Championships in the 400 IM with his personal best, an impressive feat considering that time is from spring of his sophomore year of high school.

Since getting to The Pingry School, Fallon is undefeated at the New Jersey HS Meet of Champions in the 100 breast, while he’s won the last two 200 IM titles and was runner-up in spring 2018 as a freshman. Competing for Somerset Valley YMCA, Fallon has won several YMCA national titles. In 2018 at summer Y-Nats in long course meters, he won titles in the 800 free, 200 breast, 200 IM and 400 IM. Then, at the 2019 spring Y-Nats in short course yards, he won titles in the 100 breast, 200 breast and 400 IM.

At Penn, Fallon will be incredibly valuable as soon as he suits up for the program. Last year, he would’ve been their fastest swimmer in the 400 IM by six seconds, the 200 breast by three seconds, and the 100 breast by half a second. At the 2020 Ivy League Champs, Fallon would’ve won the 200 breast conference title and been the 400 IM runner-up, while he would’ve been fast enough to make A-finals in the 100 breast and 500 free and B-finals in the 200 IM and 200 fly.

Fallon is also already faster than Penn’s program record in the 200 breast by a few tenths. He’s their first public commitment for the class of 2025 so far.

Wow. Huge pick up for them!