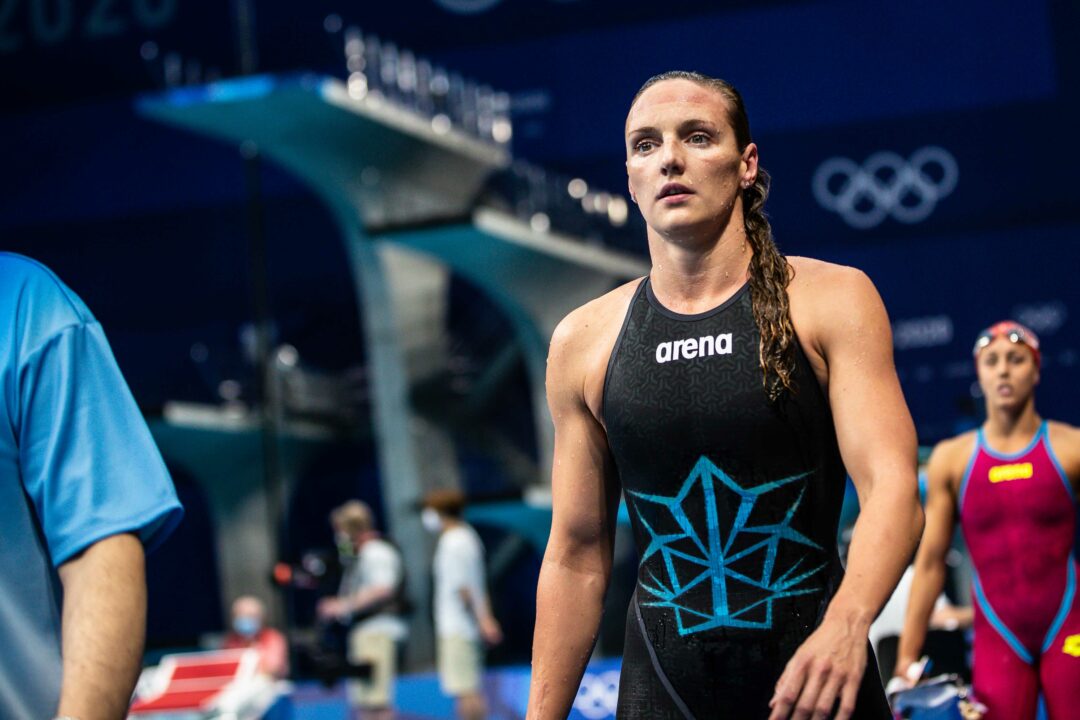 A combined seven 400 IM World Championship gold medals between them, Daiya Seto and Katinka Hosszu struggled through the prelim heats on Day 1 in Tokyo. Current photo via Jack Spitser/Spitser Photography

The first session of Olympic swimming from Tokyo is in the books, meaning it’s time to overreact to what went down and theorize what it could mean for the rest of the meet.

Two of the biggest question marks coming into Day 1 came in the 400 IMs, where many wondered what kind of form defending Olympic champion Katinka Hosszu and three-time world champion Daiya Seto would show up in.

As it turned out, neither were great.

First up was the men’s event, and Seto was actually looking strong early, leading his heat by over a second through the breaststroke leg. But it all came crashing down on freestyle, as the Japanese superstar slowed coming home, splitting 1:00.72 to ultimately post a time of 4:10.52 which was only good enough for ninth overall.

4:10.5 is by no means a bad swim. The time would be good enough to advance to the final in essentially every other major international meet in history, and would’ve even won bronze in the World Championship final two years ago. But Seto didn’t look like he was holding much back through the early portions of the race, and he paid for it late.

He’s still a medal contender in the 200 butterfly and 200 IM later in the meet, but it’s clear he’s not on the career-best form he showed in early 2020, where a gold medal in the 400 IM seemed to be all but a lock.

As for Hosszu, she wasn’t as aggressive as Seto in her prelim swim, but still slowly faded back in the pack as she ended up clocking 4:36.01 for seventh overall. That will give her an outside lane in tomorrow’s final—somewhat reminiscent of the position Michael Phelps found himself in in 2012—though she’s still less than three-quarters-of-a-second outside of the second-place swimmer (4:35.28, Aimee Willmott).

What does this mean for Hosszu over the course of the next week?

While she could rebound with a strong 400 IM final, her heats swim showed she’s nowhere near where she’s been in previous years. She’ll still be the one to beat in the 200 IM,  but other than that, her medal hopes have severely dimmed.

The U.S. team came flying out of the gates on Saturday night, advancing all 11 of their swimmers/teams through to the morning session.

Chase Kalisz and Jay Litherland set the tone with solid showings in the men’s 400 IM, and the rest of the team followed suit.

Emma Weyant joined Mitchell as the only two Americans to go faster than their Trials times (or best times) in the women’s 400 IM, all of a sudden finding herself as one of the gold medal favorites after qualifying first by almost two seconds in 4:33.55.

Hali Flickinger safely advanced into the women’s 400 IM final as well, and Michael Andrew (58.62) and Andrew Wilson (59.03) easily made their way into the men’s 100 breast semis.

If there was a weak spot it was in the women’s 400 free relay, as the U.S. was back in fifth with a time of 3:34.80. They’ll bring in their top-two finishers from the Trials in Abbey Weitzeil and Erika Brown, and with no one really asserting themselves in the prelims, Simone Manuel could potentially get a spot in the final despite finishing ninth in Omaha.

All told, we knew the women’s 4×100 free would be maybe the Americans’ weakest relay, and overall the team looks well prepared and well on their way to another big medal haul.

It’s also worth mentioning that the Australians looked strong as well, led by Brendon Smith‘s National Record to start things off in the men’s 400 IM (also qualifying first for the final). Emma McKeon followed with a Commonwealth Record in the women’s 100 fly, Elijah Winnington and Jack McLoughlin were well in control in the men’s 400 free, and the women’s 400 free relay was superb despite missing their top-two legs.

Is Zac missing the 100 semi a notable miss?

He wasn’t even in a seeded heat.

Daiya Seto? More like Daiya Still rocks (!!) ; although you didn’t make the 400 IM final, we still are proud of you and can’t wait to see what you do next!

Prediction two: the us men go 1-2 while Fosters Time from last night in Austin would’ve placed him third

Prediction; only one swimmer goes under 408 in the men’s I am

Am I the only one still head scratching why McKeown dropped the 200IM when so many people were saying Hosszu wasn’t in top form?
It very much may have taken a gold medal off her table.
I mean. At least stay in until after prelims. Or at very least see how this 400IM shakes out for your competition.

Only after Olympic Games you can judge how wise her decision was. Maybe she wants long standing Olympic records in her name more than extra medal, or maybe there are some post-trials health issues. It can be many reasons that we don’t know now. And it was done kind of sudden that only adds some intrigue. But what I can tell you for sure that concern about Hosszu’s current form wasn’t definitely among factors that affected her decision of dropping 200IM race.

Between a medal and an olympic record, I think I’d 100% choose a medal. Records are meant to be broken whereas nobody can take your medal once you’ve won it (unless you cheated by doping). A medal lasts forever, a record really doesn’t

I don’t think Hosszu’s form was a factor at all. Even if she thought she was getting silver, swimmers don’t usually just throw away silver medals. I assume there’s another reason but we’ll have to wait and see.

Hide the women and children when the final of the women’s 4 x 100 meter freestyle relay comes on.

Seto looked so good, but it didn’t even seem like he lost steam, his freestyle technique just genuinely seemed to be awful. I’m not sure what happened there but it doesn’t bode well for him.

Sjostrom 56.18, smiling when she looked at the time made me so happy. That Zhamg and McKeon dead heat was awesome, and a new PB for McKeon.

Kamminga 57.80 is quite a statement, though Peaty beat that with a nice stache. I doubt the upset it coming though he clearly means business. What could this 57 speed mean for his 200?