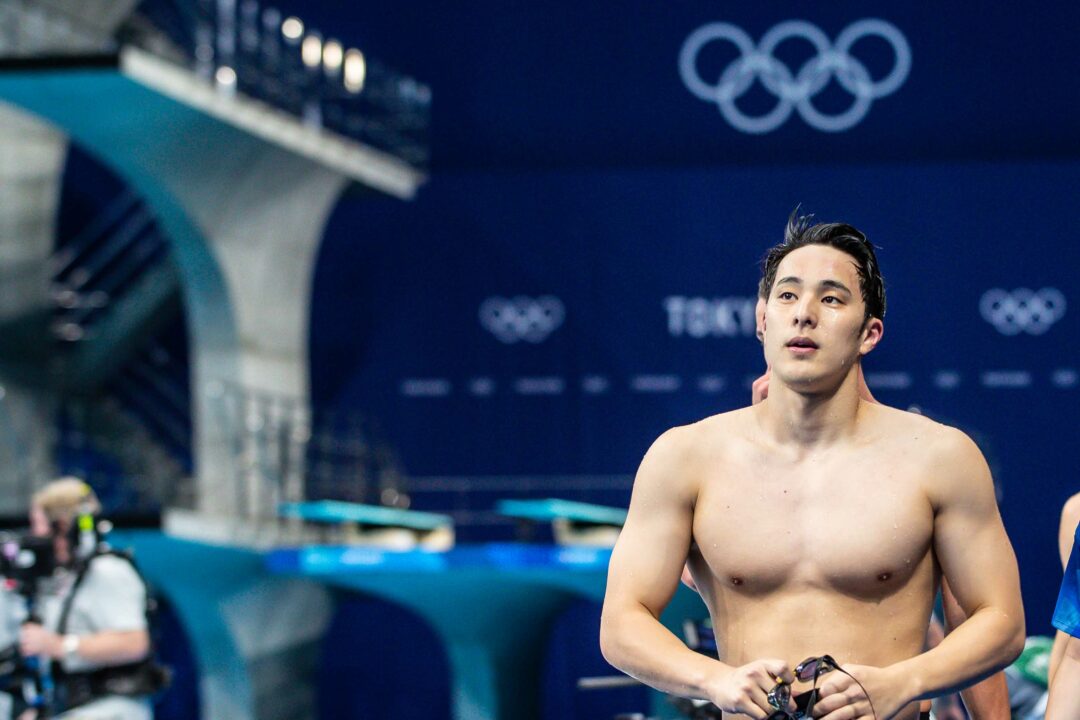 Hear what reigning 400m IM world champion Daiya Set of Japan had to say after his 400m IM mishap in the heats here in Tokyo. Current photo via Jack Spitser/Spitser Photography

With the top 6 finishers all dipping under the 4:10 mark in today’s men’s 400m IM heats, reigning world champion Daiya Seto found himself out of the final in 9th place. Putting up a strong race through the beginning of the freestyle leg, the man let himself get passed by several swimmers to shockingly wind up sitting on the sidelines for the final.

Seto conveyed post-race that he miscalculated the field in his pursuit of conserving energy in this earlier round in order to ‘swim firmly’ in the final.

“I thought I’d finish in 8th place but I misread the time needed to advance,” he said. “At the end, I misread the freestyle pace. It’s a shame because I’m in good shape.

“I’m sorry for the disappointing result. Frankly, I made a mistake.”

From a historical perspective, Seto’s not wrong in terms of what it has taken to make the men’s 400m IM final at major international competitions in recent years.

Flash forward to Tokyo and a mark of 4:10.20, earned by Max Litchfield of Great Britain, ranked 8th among the talented field of heats swimmers. That is more than 3 seconds faster than Rio and 5 seconds faster than the most recent World Championships.

For Seto, the dynamic swimmer will still have the opportunity to get on the podium in the 200m IM as well as the 200m fly and could potentially make an appearance on the men’s 4x200m free relay. He says he won’t make the same mistake again.

He should have been dq’d anyways, watch the breast pull outs. 2 dolphin kicks, the 2nd was not a body wave!

Its not like he went a slow time either, that was a pretty tight prelims. Still, he shouldve finished higher in his heat to be safe

Why would he want to be in 8th place?

I think he was caught off guard by the other swimmers who really picked it up the pace on the final 50.

Jay Litherland, on the other hand, knew exactly what was happening and made sure not to get left behind. Smart guy.

Ya it’s called getting ur hand all the wall first…..almost like it’s a race or something

I feel that comment doesn’t give enough credit to why he’s in the final. I’m pretty sure he works his butt off in order to be that lucky.

Luck is when preparation meets opportunity

I wonder if you think the same of Michael Phelps, who was on the right side of plenty of tight finishes throughout his career.

At some point, it’s not luck anymore…

This isn’t too convincing, what does it even mean that he misread a time good enough to qualify as 8th? He was doing advanced math on the last 50m?

That being said, 4.10 isn’t a bad time, to say the least, so he may indeed be in a shape good enough to get some medal.

I think it got a bit lost in translation. He means more along the lines “I assumed the qualifying time was going to be like Rio or WC’s 8th: ie. 4:13-4:15, so my 4:10 should have been fine. I misread how the field was going to turn out.”

I can believe that he’s in good shape, as he says (even if breaking 4:03.8 was never quite in the cards). And his plan to come down from altitude at the last moment sounded like a good one, especially right before the 400IM. But if he saw that the field was gaining on him so much at the 350, why couldn’t he respond? He’s been something like a 1:46.6 200 LCM free (I could be off, but not by much), and you’d think that coming off that final turn he’d have turned on the afterburners. But he seemed to have no answer.

Splits in the IM are just different. It’s hard to judge.

Same goes for Chase on the breaststroke.

Let’s just hope he can redeem himself in the 200IM and 200Fly then (especially since I accidentally put him as my number 1 pick in the 200fly for my pick ’em)!

“I made a mistake” moment

He ran out of fuel on the last 50, it was obvious.

I thought he really tightened up the last 25 as well. Clearly he knows more about what happen than I do, but I hate that he’s not in the final.

The same as Carson in Omaha!