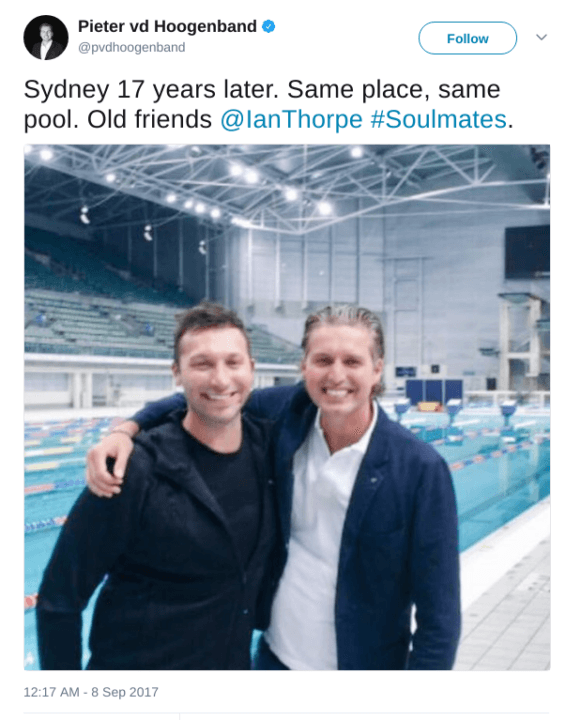 Even amidst public appearances with such athletic icons as Usain Bolt, Australian swimming legend Ian Thorpe makes time for old friends. At the Sydney Olympic Park Aquatic Centre’s historical exhibition induction this week, ‘Flying Dutchman’ Pieter van den Hoogenband made the haul from the Netherlands to New South Wales to meet up with his freestyle nemesis of the 2000 and 2004 Olympic Games.

Van den Hoogenband won the men’s 100m free and 200m free races at the 2000 Olympic Games in Sydney, pulling an upset of sorts over the host nation’s golden boy, Thorpe. The Aussie would take back his 200m freestyle title, however, at the 2004 edition of the Games in Athens. He and VDH took on American newbie Michael Phelps in what was nicknamed ‘the race of the century.’ Thorpe won gold, with VDH earning silver and Phelps taking bronze.

Reunited as part of a Dutch documentary project, Thorpe and VDH haven’t physically seen each other since 2008, although they reportedly remain good friends. Both storied swimmers have entered the commentary world in their post-competitive days, with the Dutchman paying particular attention to the sprint freestyle events.

“I think it’s about time someone broke the world record and we closed the whole page on the shiny suits,’’ he said. “With Caeleb Dressel swimming so fast I hope it will motivate Kyle Chalmers and Cameron McEvoy to perform well and train hard and get there.’

“We know McEvoy can swim that fast but unfortunately he didn’t do it in the Olympic final.’’

Van den Hoogenband has additional ties to Australian swimming by way of his former coach Jacco Verhaeren having taken over as the Dolphins Head Coach back in 2013. The two reportedly meet up once a year on the Gold Coast, the site of the 2018 Commonwealth Games.

both those guys used suits that are illegal today. PVH whining about the world record doesn’t carry any water with me. the WR was set using legal suits of the time.

The discussion read above about the so-called “shiny suits era” leads, in my opinion, to bizarre conclusions or real absurdities.
First of all, there are at least two periods: 2008 was different from 2009 (100 per cent poly suits used by Biederman, Cielo and so on, far more efficient than the 50 per cent poly suit like Speedo Lzr).
Second, the poly suits gave different advantages to different swimmers (more naturally efficient a swimmer was, slighter was the advantage he had from the “shiny suit” he used).
Finally, it’s pointless considering only the advantage driven by those suits, and not the nowadays advantages (at the start, and all those, including the suits, because the suits progress hasn’t… Read more »

5
0
Reply
Caleb Dressel WILL get 7 golds in Tokyo

Michael Phelps has no world records using your logic

6
-5
Reply
JP input is too short
Reply to  Uberfan

Still has the best textile 200 fly…

200 fly 1:52.09. Obviously Dressel is the real world record holder in the 100 fly no question. Although Phelps never reached his peak, there is no doubt that he is the GOAT. I think he had 1:53 potential in 200 im but unfortunately shoulder issues prevented us from seeing that in Rio. Plus LZR racer leggings is far inferior to the Arena suits

How can Phelps be the GOAT when all his times are illegitimate barring the 200 fly?

Back in his day he was the fastest. Imo he is 2nd or greatest 200 freestyler ever. Also, no one has dominated like he has in multiple events.

Back in his day they were the fastest, and some are still the fastest today. But nobody today has gone all of those times. Again, MP never peaked. Basically quit swimming in 2009 and had shoulder issuses last year. Undoubtedly, he is the G,O,A,T.

But aren’t those lzr times illegitimate because of your super suit logic, also his backstrokes were done in suits that would be illegal today :/

Even though all suits past the knees/above the waist are now illegal and in the same category such as “now illegal suits” they are not all the same. The insanely buoyant full bodied Jaked/Arena suits were legitimately unfair and caused mayhem on the world records. It was lovely and fun to watch in ’09…but leaves everyone very bitter nowadays, understandably so. MP did not wear them once. He usually wore the leg skin speedo suit- which was really only half polyurethane. It was FAR inferior to a full body Jaked. It was at best “superior” to modern jammers- but I will always advocate that Phelps took the fair route and won fair and damn square. Same with Peirsol.

No. The leggings back then are basically like today’s new improved jammers. I don’t believe Lochte is the Goat, he didn’t get 8 gold medals.
Remember, Phelps is a 2002-2008 fossil, he probably could have continued world records after 09, but he lost interest. Lochte is tier 8, maybe tier 9, but Michael is tier 10. Also, 1:42.96 by Phelps is definitely better than Lochte. My point is mainly on the margin. Cielo was only .13 faster than MeEvoy, but he had a suit that would have gotten McEvoy 46 low. The LZR wasn’t the same as the Arena, like half of the time advantage. Not only are times in play (Phelps still more impressive), but repeats of dominance.… Read more »

Exactly. Continuing what I said above- Phelps won in pure style. He rarely faltered, often made the 2nd best look like a silly boy as if to say “good try”, and had a feverish poise. Lochte faltered often, was kind of a goof, and wasn’t very champion-esque. He is a hell of a guy- and brought a whole new light to treating fans with respect– however as far as history goes? Phelps was the ****ing champion we all needed in this sport- lets be real

This is your logic.

I told you again abd again. Why didn’t you listen? McEvoy with Cielo’s suit would have gone like 46.4 with the arena x glide, but the suit Phelps wore was 1/3 of what the arena x glide (50 percent in a full body suit but Phelps usually wore leggings.

He just told you. Cielo was wearing a canoe. Phelps was wearing ’08 leggings in his ims which is probably slower than todays suits. Plus time doesn’t matter because he has however many golds. Always performed when it mattered.

No, the lzr racer is still better than the best suits of today.

So you think that Cielo with arena x glide full supersuit > Mcevoy? Lol no way buddy.

Thought is was Eric Trump at first sight!

That hair style is not the greatest.

Trump? There’s no need to be insulting!!

Not sure if Thorpe can swim after major shoulder surgery.

Hoogie would whip him these days.