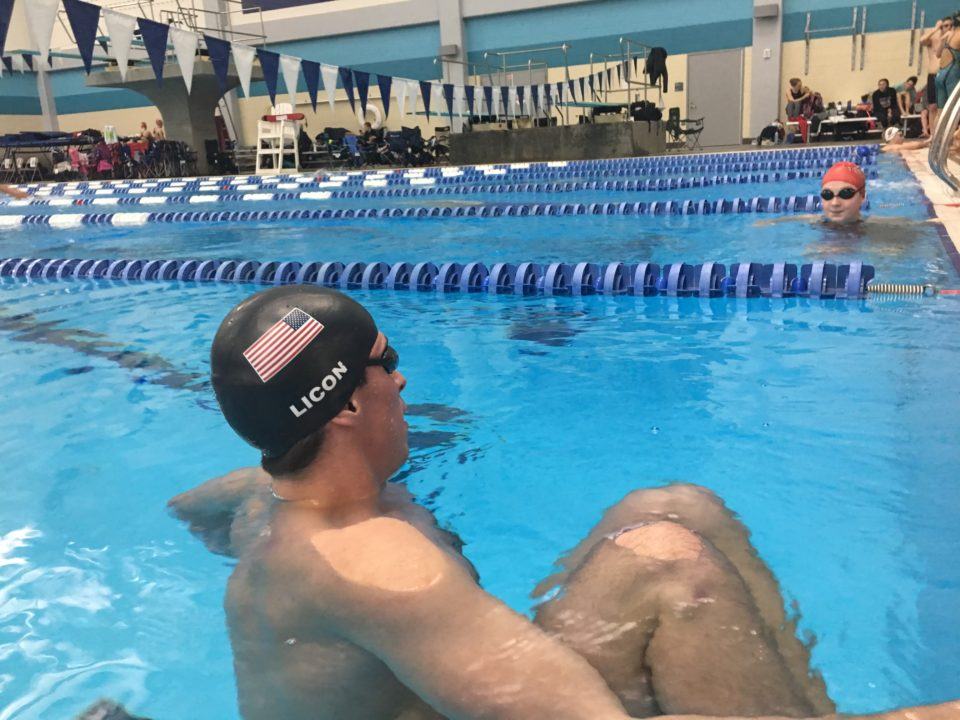 Close races and high stakes were the name of the game at day two of the 2017 KMSC Pro-Am Classic in Lewisville. Current photo via Shawn Klosterman

The fun atmosphere and prize money offered at the KMSC Pro-Am Classic always seems to bring out big swims, not just from the pro’s putting on a show while earning their Christmas bonus, but also from the amateurs who are eager for their chance to chase them down.

Friday night action began with Ashley Twichell earning her second win of the weekend, this time taking home the $600 prize for 1:47.89 in the 200 Freestyle. She was once again pushed by Erica Sullivan from Sandpipers of Nevada who touched at 1:48.41. Wichita Swim Club’s Astrid Dirkzwager followed closely for third place, joining the leaders under 1:50 with her 1:49.63 finish.

The men’s 200 Freestyle almost looked like a practiced synchro routine as Olympic 800 meter Freestyle Relay teammates Clark Smith and Jack Conger raced side by side with nearly perfectly matching splits throughout. Conger managed to take the win with a slightly quicker 24.42 final split, edging out Smith 1:36.29 to 1:36.82. Princeton Alum Teo D’Alessandro claimed the $100 prize for third place at 1:37.88.

The women’s 100 Breaststroke was all amateur, with Allie Rogers from Little Rock Dolphins breaking away from the pack to claim the win with 1:04.38. Sandpipers’ Reese Hazan (1:05.06,) and Sienna Plantation’s Bryony Kennett (1:05.56) completed the podium with second and third respectively.

The men’s Breast saw Chuck Katis repeat for the top prize, holding off Longhorn star Will Licon, 52.09 to 52.46. Teo D’Alessandro claimed the third place prize for the second time in the session with 54.18.

Side-breather Hannah Saiz defended her 2016 Pro-Am title in the women’s 100 Fly with 54.79, fighting hard on the second 50 to fend off another Sandpiper, Chloe Freeman, who touched at 55.02. Texas Ford Aquatics’ Ashlyn Fiorilli was also in the hunt, taking third with 55.26.

TXLA’s Tripp Cooper was out like a shot in the men’s 100 Fly with a 21.26 split, but Texas teammate Bryce Bohman crushed the second half, sneaking past for the win with 46.42 over Cooper’s 46.48. Michigan commit Patrick Callan claimed third with 48.29.

The Sandpiper squad of Freeman, Victoria Gutierrez, Allie Emery and Sullivan combined to take the women’s 400 Freestyle Relay with 3:27.95. Wichita Swim Club claimed the men’s 400, when the team of Benjamin Patton, Sam Hutchinson, Joon Hee Ooten and Hugh McPherson held on for the win by just a hundredth of a second, nearly having the title stolen by a hard charging 44.59 anchor from Trident’s Patrick Callan who touched at 3:09.10 to WSC’s 3:09.09.

who woulda thunk that Tripp Cooper would be the most impressive longhorn around rn. These boys continuously unimpress me every time they hop in the pool. Its almost like as soon as you graduate from UT you get sent in a time warp to 2004 and go times from that era for the rest of your career while everyone else passes you by.

“yeah its just December” WHAT EVER these guys will not show up when it counts. Career over. Licon shoulda been a 2:06 and Smith a 3:39 and Conger a 1:52 fly. It will never happen.

go home murica, Texas has and will continue to produce. other career paths open for these guys… the ones that stick with the sport will do just fine. Glad to see these types of events allowing these guys to continue the sport.

Honestly is there any sign of being rested or shaved? Who’s to say they’re not in a the thick of training without a mid season meet

Oh come on. Have you ever been to this meet? For the professionals it is a fun meet, a chance to make a couple hundred bucks (which maybe just covers their travel expenses to attend), race in front of a familiar and appreciative crowd, and meet a bunch of younger swimmers who really look up to them. It’s not a meet they are going to really push themselves over. Will Licon went swam for nearby Plano Senior High School for a couple of years (he and Seth Stubblefield were on the same team, so no wonder that team set a HS medley relay record) so a lot of the kids around here know him or know of him. Almost everyone… Read more »

Murcia…….One of the dumbest, most uninformed, and swimming ignorant comment I’ve read on here in a while!

Will licon did not compete in the olympics.

he’s olympic calibur and that is the point of the article. you don’t have to take it all literally if it’s not meant to be.

The article previously incorrectly stated that Licon is an Olympian. He is not. He is a member of the National Team. It has been corrected.

Wait, so we’re 50 free semis and finals in the same session? That’s odd

Oops, meant for this to be on euros article