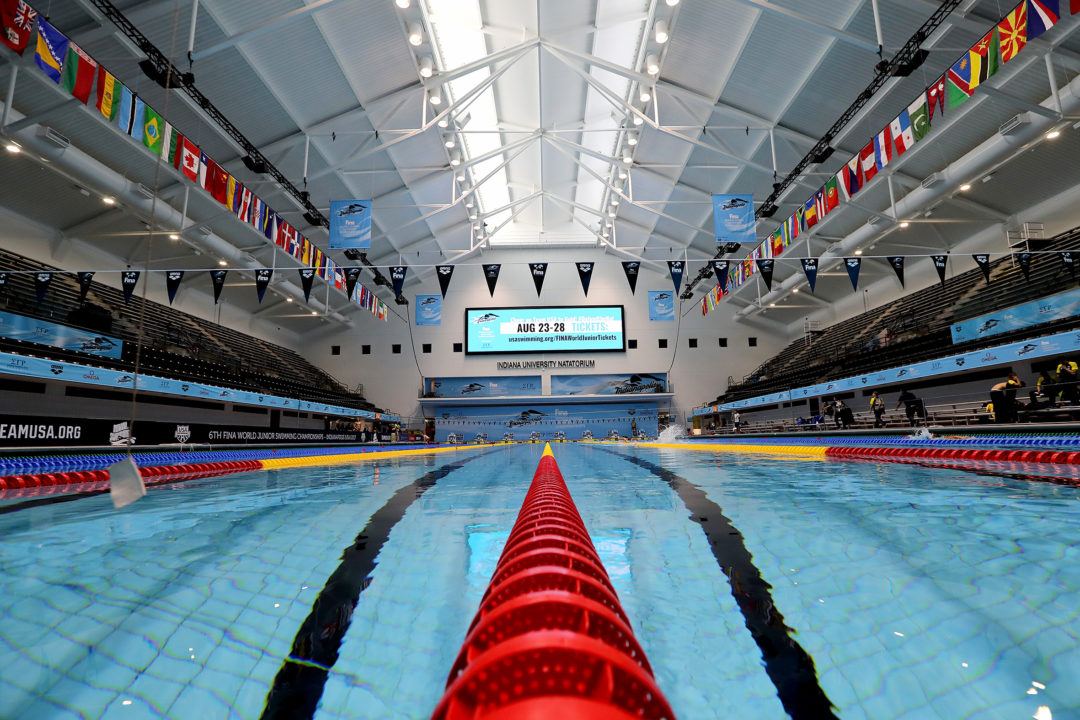 USA Diving announced the recipients of its annual awards at a ceremony Friday in conjunction with the 2017 USA Diving Winter National Championships in Greensboro, N.C. Current photo via Satiro Sodre/SS Press

USA Diving announced the recipients of its annual awards at a ceremony Friday in conjunction with the 2017 USA Diving Winter National Championships in Greensboro, N.C.

David Dinsmore was honored as USA Diving’s Athlete of the Year after finishing sixth in the men’s 10-meter final at the 2017 FINA World Championships in July. He won a silver medal in the same event at the World University Games in August. Dinsmore paired with Krysta Palmer for a bronze medal in the mixed team event at the World Championships, and he captured the 2017 NCAA platform title while competing for the University of Miami.

Matt Scoggin received the Mike Peppe Award, given to an outstanding senior diving coach. Grayson Campbell and Alison Gibson won individual national titles on 1-meter as Longhorn Aquatics went on to win the team title at the 2017 USA Diving National Championships. Gibson also represented the United States at the 2017 FINA World Championships, and four University of Texas divers – Gibson and Campbell along with Mark Anderson and Meghan O’Brien – were among the divers on the 2017 World University Games squad. Gibson also won an individual NCAA title on 1-meter. Scoggin also was honored with the Mike Peppe Award in 2014 and 2015.

Jeff Bro has been selected as the recipient of the Moose Moss Age Group Coach of the Year Award for the fourth consecutive year. His GC Diving team won the junior team title at the 2017 USA Diving National Championships. Hailey Hernandez won national titles on 3-meter and platform, and seven other divers from GC Diving placed in the top 10 at nationals. Bro also sent two divers to the Junior Pan American Championships in Victoria, Canada. Hernandez came home from Canada with a gold medal on 1-meter and a silver medal on platform, and Bridget O’Neil also competed for Team USA.

Jim Stillson was presented with the Phil Boggs Award, which honors those who have achieved individual excellence in diving and have given back a part of themselves to assure the sport’s continuation and success. He is currently a member of the UANA Technical Diving Committee and is on the United States Diving Foundation Board of Trustees. He has been a member of USA Diving’s Board of Directors and has served on the rules committee, the senior diving committee, the judges certification committee and many others. He served as team leader for the 2007 Pan American Games and the 2015 World Championships teams. He has coached three Olympians and was named NCAA Coach of the Year three times. He was an NCAA All-American while competing for the Ohio State University.

Dave Burgering received the Glenn McCormick Memorial Award, presented in recognition of outstanding contributions to the sport of diving. A 1980 Olympian and 2008 Olympic coach, Burgering served as USA Diving’s President of the Board of Directors from 2002-2008. He has also served on nearly every USA Diving committee, having been chair of the Committee for Competitive Success as well as the Junior International Subcommittee, along with holding positions on the rules committee, finance committee and member services committee. As an athlete, Burgering won bronze on 3-meter at the 1983 Pan American Games and was a member of the national team from 1977-1984. He began his coaching career in 1985, and his athletes have won 30 junior national titles and 15 senior national titles.

Alexandria Dive Club received the Dick Wilson Memorial Award, which annually honors the most improved junior and age group diving team. Alexandria Dive Club finished second as a team at the 2017 USA Diving National Championships, a year after finishing 8th overall. With five divers recording top-seven finishes on at least one event at the 2017 USA Diving National Championships, Alexandria Dive Club scored 48 points higher in 2017 than it did at the 2016 national championships. Max Fowlerswept the boys’ 12-13 age group, and Anne Fowler won gold on 1-meter in the 14-15 girls’ age group.Conor Casey, Jacob Fisher and Finnian Gelbach all turned in top-seven finishes for ADC.

Murphy Bromberg was presented the Wendy Wyland Award. Presented in memory of the late 1984 Olympic bronze medalist, the award recognizes a diver who represents the following qualities:  A love for the sport; extremely hard working; exceptional competitive ability; courage in dealing with adversity; ability to come back from injury or illness; a never quit attitude; respect for fellow competitors; and performance beyond expectations. A six-time national champion and 2016 World Cup finalist, Bromberg finished third on platform at the 2016 U.S. Olympic Team Trials while diving through a shoulder injury that required surgery after trials. Bromberg was away from competition for more than a year before returning to action at the 2017 USA Diving National Championships, in which she finished 10th on 1-meter.