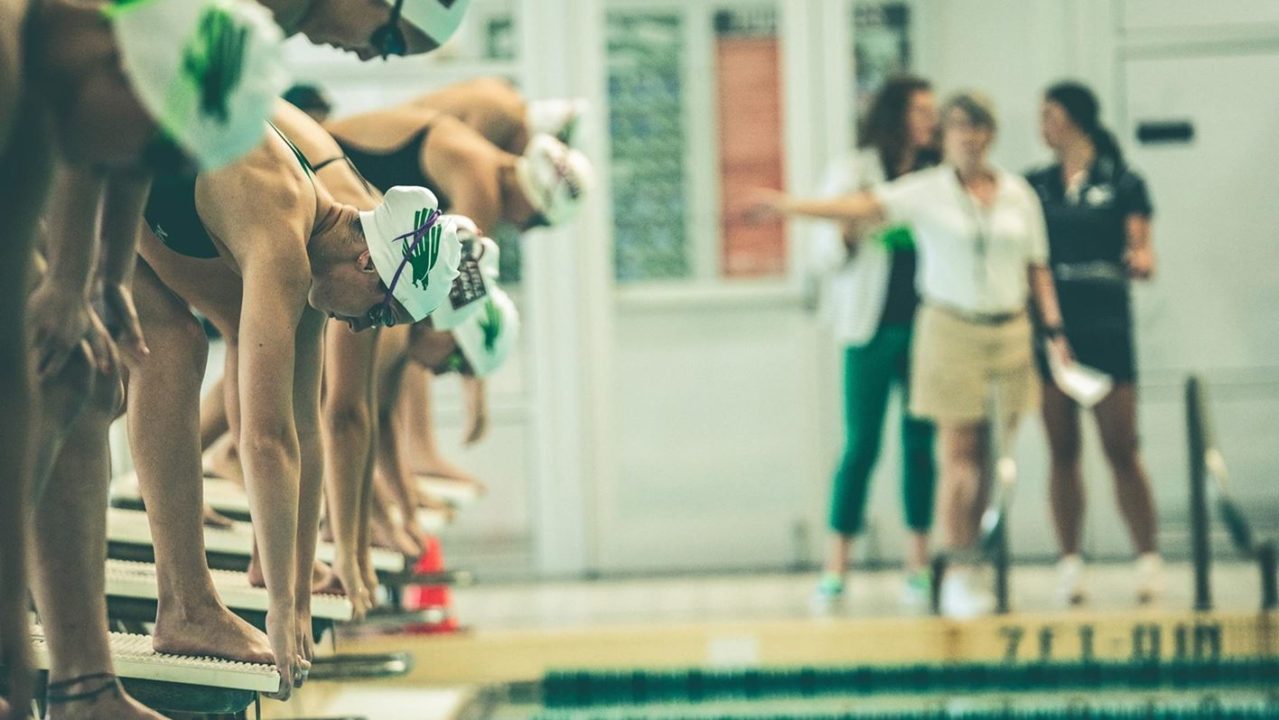 North Texas swimming and diving opened up the 2019-20 campaign in dominating fashion taking 15 of 16 events in a dual meet with Arkansas-Little Rock. Current photo via North Texas Athletics, Jesus Gutierrez

DENTON, Texas – North Texas swimming and diving opened up the 2019-20 campaign in dominating fashion taking 15 of 16 events in a dual meet with Arkansas-Little Rock and winning by a final score of 213-84.

“It was a good day,” head coach Brittany Roth said. “Really proud of the girls, we’ve been training hard for a month now so I know right now in their training cycle they’re really tired, but to see them fighting all the way through to the end of a meet is really encouraging.”

The Mean Green were led by junior Leigh Faires McGee who took first place in the 100, 200 and 500-freestlye races, and was a member of the first place 200-freestyle relay team.

Sophomore Brooke Beddingfield took first place in the 100 and 200-Breaststroke, while junior Robyn Lee finished in first in the 200 Back and 100 Fly. Other top finishes by North Texas are as followed: Junior Meghan Miller (1-Meter and 3-Meter Diving), sophomore Bryanna Vasquez (1000 freestyle), senior Jowita Sienczyk (100 back), freshman Kaitlyn Carr (50 free), and sophomore Karigan Stanley (400 IM) and Sienczyk and Stanley teamed up with freshmen Jenny Holwell and June Harris to take home the 400 medley relay.

“This is a lot of composure trying to race in a dual meet,” Roth said in regards to the slew of freshmen on the team. “This experience is a good first step in their careers here.”

“Overall I think our divers did well for our first meet,” diving coach Mark Murdock said. “We took a huge step with confidence in our dives, especially from our four freshmen divers who were very confident on the board and in their dives.”

What’s Next?
The Mean Green will host their annual Green versus White Alumni Meet on October 12 before traveling to SMU for a dual with the Mustangs and LSU on November 2.

DENTON, Texas – The Trojan swimming and diving team began their 2019-20 slate this weekend, facing a tough North Texas team. While Little Rock fell 213-84, the meet not only provided a solid starting point to build upon for the upcoming season, but also gave several new faces a chance to step up and perform.

“There is a lot of potential in this group, and they gave their all ’til the end,” said head coach Amy Burgess. “We’re looking forward to taking what we saw and improving each day as we move into the next weeks.”

Relays
The meet opened with the 400 medley relay, where the squad of freshman Fer Moussier, junior Palmer Ristroph, sophomore Carolyn Godwin, and freshman Anna Grom combined to post a third-place finish with a time of 4:04.09. To conclude the meet, the A 200 freestyle relay of Godwin, Redzuan, Lawrence, and Grom touched the wall third, clocking in at 1:41.84 to secure team points.

Diving
Junior Sierra Thain led the way for the Trojan divers on each board, finishing third on the 1-meter with a score of 203.70 before collecting second on the 3-meter with a score 229.43, less than three points behind the winner. Classmate Coy Jones also grabbed team points of her own with 190.28 points on the lower board and a score of 208.65 on the higher.

Freestyle Events
Two freshmen represented the Trojans in the longest event of the day, the 1000 freestyle. Emma Bleasdell touched the wall at 11:05.23 for third, while Fernanda Gamez also earned points in 11:11.51, good for fifth. The two also raced again in the 500, joined by classmate Asmalia Redzuan. The trio finished right after one another, with Bleasdell at 5:26.28, Redzuan at 5:26.48, and Gamez at 5:27.84.

On the other end of the spectrum, junior Regan Lawrence and Grom raced in the shortest event, the 50 free, collecting points for the team with times of 25.88 and 26.22, respectively. Lawrence and Godwin returned in the 100 free, finishing within tenths of each other. Godwin posted a time of 56.41 while Lawrence was 56.62. Redzuan took third in the 200 freestyle, stopping the clock at 2:00.00 exactly, while sophomore Lea Zengerling was right behind in 2:00.98.

Breaststroke Events
Ristroph made another appearance in her signature event, the 100 breast, to register a time of 1:08.66. Freshman Taylor Baldacci also scored in the 100 with her 1:12.45. The junior also was the top Trojan in the 200, finishing at 2:33.96, while another freshman followed: this time Nicole Burek in 2:39.47.

Butterfly Events
Moussier returned in the 200 butterfly, winning the event by over a second in 2:08.40. Senior Rachel Maradyn scooped up a point, posting a 2:17.87. In the shorter fly event, Godwin stole second place by a little over three tenths, recording a 1:01.29. Freshman Brianna Ridings and sophomore Katelyn White also were awarded points, with times of 1:02.12 and 1:03.73, respectively.

400 IM
Not to be forgotten, Ashleigh Green led the Trojans in a race meant for perhaps the most versatile and tough swimmer. The freshman finished at 4:50.61 after a strong front half.