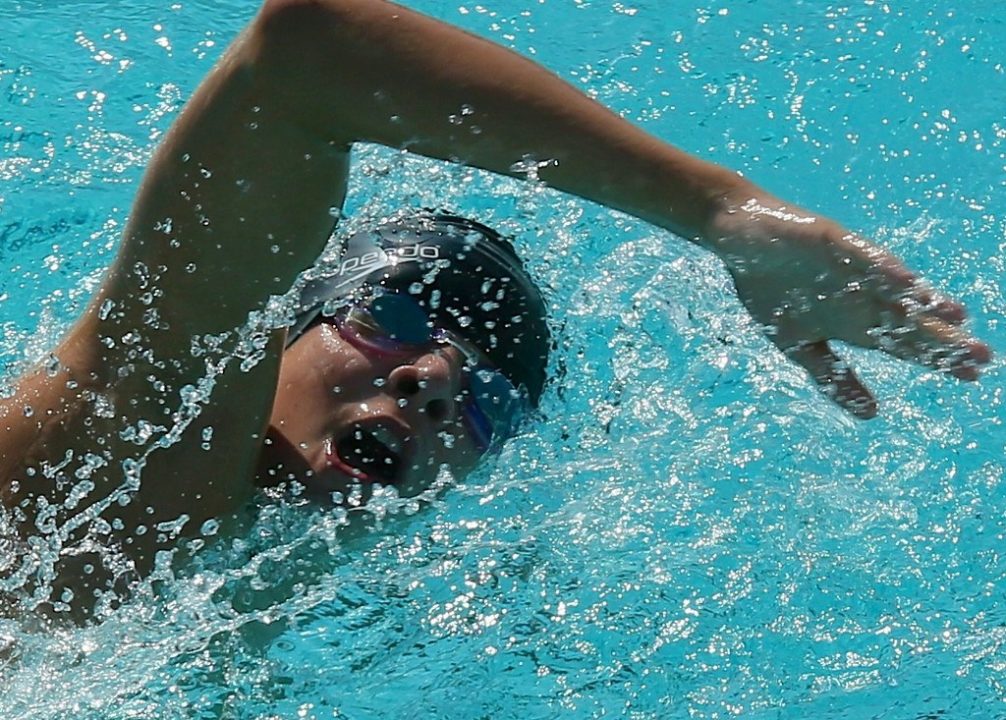 Pennsylvania has postponed the second of its high school state swimming & diving meets, the next in a wave of events upended by the novel 2019 coronavirus.

After senior Jacob Molacek broke a pair of state records at prelims of the Nebraska High School State Meet, his teammates joined him on the record board at finals, breaking a pair of free relay records en route to the overall team title.

On the girls side, Lincoln Southwest swept the relay races and freshman Dannie Dilsaver added a a 200 IM victory a day after her state record performance to vault the team to the overall girls trophy.

Molacek was the star of the boys meet. In prelims, he set a state and national record in the 100 breast along with a state record in the 200 IM with times of 52.92 and 1:45.50, respectively. At finals, he put those individual swims on the backburner, focusing on his relay split legs of Creighton Prep’s relays and found similar success, helping his team set state records in the 200 and 400 free relays.

On the both relays he was joined by juniors Sean Tate and Ryan Tate as well as senior Michael Bauwens, who also put up strong splits. Sean Tate was 20.1 on the 200 free relay with the other two legs being 21.1s to give Creighton Prep a 1:22.31 state record. Sean Tate was 45.3 swimming second in the 400 relay, which went 3:02.23 for another meet record.

Elkhorn High School actually led briefly, winning the first two events of the meet. The 200 medley relay of Riley Herchenbach, Michael Mollak, Jesse Holmes and River-Sage Tucker went 1:35.02 to beat Creighton Prep by half a second. Then Mollak came directly off that relay to win the 200 free in 1:41.19, beating Creighton Prep’s Ryan Tate by a little less than a second.

But it didn’t take long for Creighton Prep to overtake Elkhorn for the lead. Elkhorn also got passed up by Lincoln Southwest, which cruised to second place in the overall team points, getting a state championship in the 500 free from junior Vladislav Blazhievskiy, who went 4:39.21.

Other winners on the boys side were Ralston senior Garrett Cadotte in the 100 fly (49.52) and Grand Island freshman Matthew Novinski in the 100 back (52.09).

The Lincoln Southwest girls put up big points in the relay events, winning all three over the course of the meet on the backs of some big-time freshmen. Dannie Dilsaver was one of them, breaking a state record in the 200 IM at prelims (2:01.91) and easily defending her title at finals with a 2:02.81. Her freshman classmate Olivia Calegan was also a big contributor, blowing away the 100 breast field in 1:03.52 to help Southwest win three of the final four events to pad their title.

But as tough as that Southwest freshman duo was, there was one swimmer who had their number all night. Columbus senior Laura Miksch managed a touchout over both of them while putting together a sweep of the sprint freestyle races. Miksch went 23.38 to top Calegan’s 23.45 in winning the 50 free, then came back to beat Dilsaver by a tenth in the 100 free, 52.36 to 52.47.

Miksch was one of just two double-individual winners on the girls side, along with Omaha Westside’s Elizabeth Amato-Hanner. Amato-Hanner, a sophomore, doubled up in the 200 free (1:51.85) and 100 back (56.84).

Still, nobody could touch Lincoln Southwest in the relay races. Calegan and Dilsaver combined for the first half of the 200 free relay, splitting 23.8 (Calegan’s leadoff) and 24.2 (Dilsaver’s flying start leg) to stake their team to a big lead. Emma Vertin and Aimee Fischer closed things out from there to help Southwest dominate in 1:35.73. Fischer, the only senior on that young relay, put up a 23.1 on the anchor leg to shut the door on the field.

The closest relay was the very first one. Vertin, Sophia Nelson, Abigail Lunzmann and Calegan combined for a 200 medley relay that needed every tenth to beat Millard North. Calegan split 23.1 to bring Southwest back from the middle of the field to touch out Millard 1:47.55 to 1:47.68.

The 400 free relay was much less dramatic. Dilsaver led off in 52.44 to leave Southwest trailing only Omaha Westside (where Amato-Hanner led off in 52.38). Lunzmann and Nelson kept the team right in the hunt with a pair of 54.2s, and the senior Fischer once again came up huge, splitting 51.90 to swim by the rest of the field, finishing in 3:32.84.

You can read our prelims recap here.