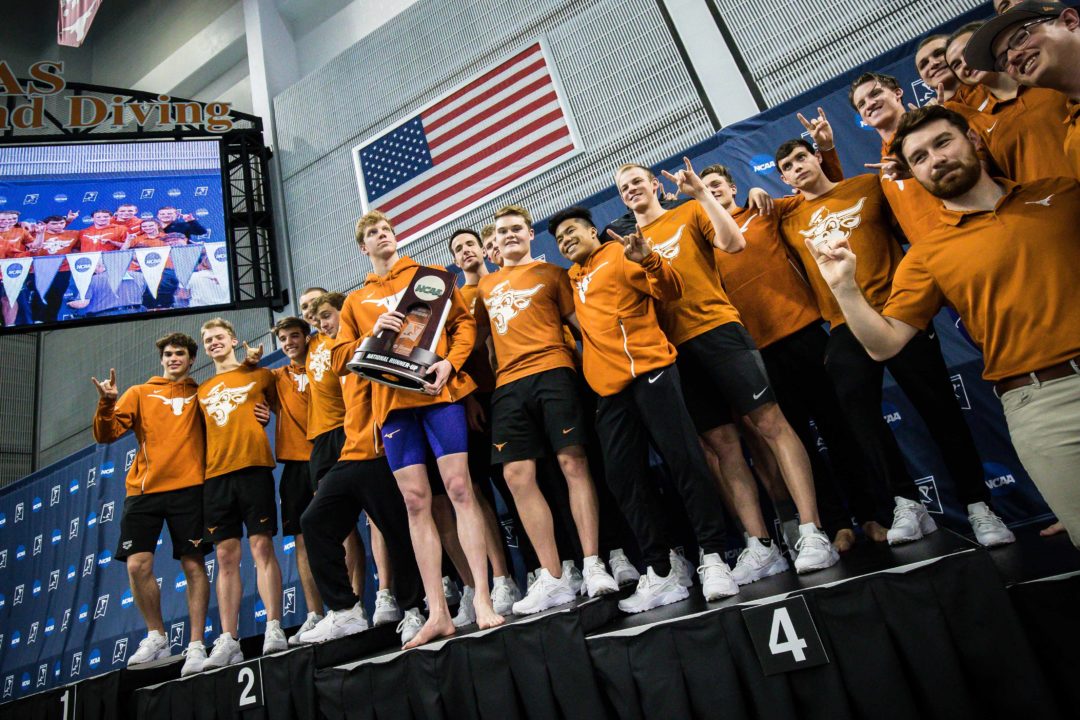 This weekend will mark the biggest weekend in college swimming since the beginning of the coronavirus pandemic, with several teams competing in dual meets. Archive photo via Jack Spitser/Spitser Photography

This weekend will mark the biggest weekend in college swimming since the beginning of the coronavirus pandemic, with several top teams expected to compete in dual meets.

Between the 5 meets, multiple NCAA stars will be in action this weekend.

Most swimmers at that tri are expected to be suited, with many chasing NCAA qualifying times so that they can dodge the uncertainty of the season to come. In other words – expect some electricity in the pool, even though team scores aren’t being kept.

Multiple reports out of Austin say that University of Texas freshman swimmer David Johnston and Foster will be chasing national age-group records during the team’s tri-meet this weekend.

The current 17-18 NAG currently stands at a 14:34.36 posted by Pj Ransford in 2015. However, Johnston’s recent drop in the 500 freestyle indicates that he has more left in the tank in the longer race.

Foster, who is also a freshman at Texas was the top ranked recruit in the country last season. He currently holds NAGs in multiple events across both short course and long course, including the 15-16 LC records in the 200 IM and 400 IM.

This will be Foster’s last chance to break the records as he turns 19 on October 26.

Texas’ biggest obstacle during the meet will be overcoming Texas A&M junior Shaine Casas. At last year’s SEC Championship, Casas was the meet’s top scorer, as he won conference titles in the 200 backstroke and the 200 IM.

The Aggies will also be led by SEC silver-medalists Mark Theall and Andres Puente, who should prove to be good competition for Foster and Johnston in the distance freestyle events.

The UVA intrasquad will feature US National Team members Alex Walsh and Kate Douglass along with standouts Alexis Wenger, Ella Nelson, and Paige Madden. If the pro group competes, expect to see Catie DeLoof in the pool as well.

On the men’s side, top recruit Matthew Brownstead and sophomore Sean Conway will also compete after their performances at the first intrasquad.

Other Meets this Weekend:

Will either the UVA meet or Texas meet be streamed?

As far as I know, no for both of them.

I don’t know about streaming, but I will be capturing race videos in Austin👍

Zoom is your friend, Coleman…

Coleman, Any chance you can get to the pool early to film the women’s meet? Asking for a friend.

So glad to hear that thank you Coleman!

The meet will be a “non-scored” meet between the three teams, no spectators allowed. All three teams will be suited, Texas has a number of swimmers shaving and resting for record attempts and NCAA qualifying time swims, SMU training through the meet, not sure about A&M other than wearing tech suits. It looks like the teams have differing goals for this meet, hence the non-scored designation. Good way for geographically close teams to get in some racing though in these times we are in.

Gosh this is new, NCAA qualifying meets in October.

You’ve been watching film too huh? That’s cool. Watch this.

2 things 1. Are both of them shaving and being rested for the NAG attempt? 2. Carson’s best is 3:38.65 from winter Jrs last December.

Thank you, corrected the time. Everyone is expected to be suited at that meet, and many swimmers are going to chase NCAA qualifying times because of the uncertainty of what’s to come. So, while we don’t know degrees on a specific level, there should be some rest.