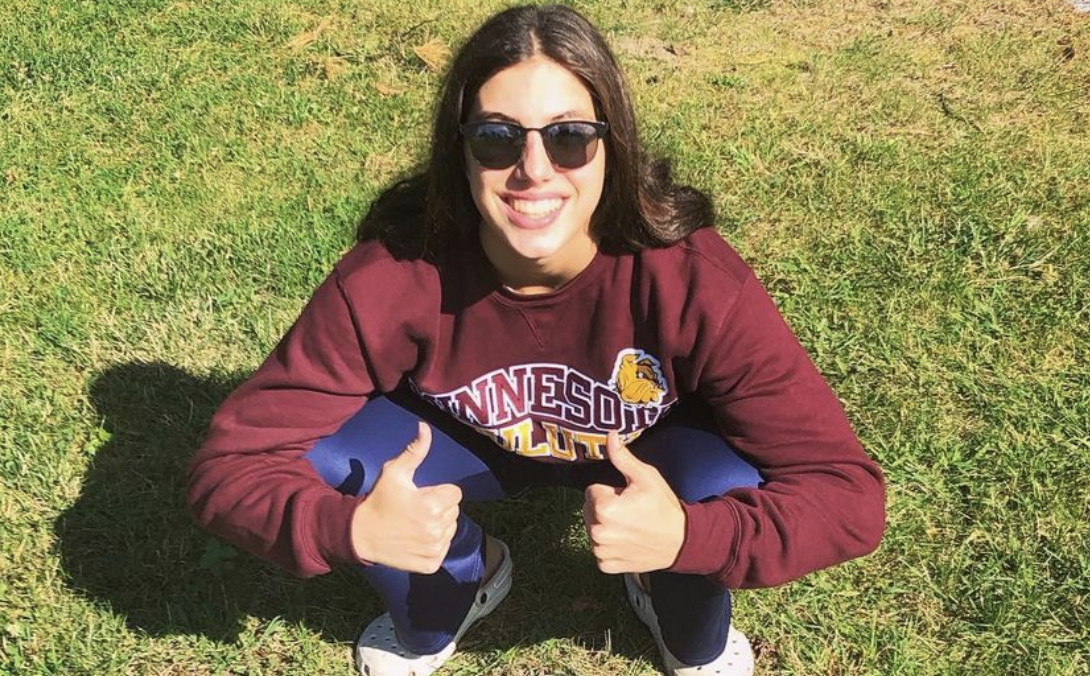 Siroky will head to Minnesota Duluth to play NCAA hockey next season, but that hasn't stopped her from continuing to excel in the pool. Archive photo via McKenzie Siroky

Despite choosing to pursue ice hockey at the collegiate level rather than swimming, McKenzie Siroky is still churning out impressive performances in the pool.

Siroky, who committed to play hockey at Division I Minnesota Duluth last year, set a new state record of 1:00.48 in the girls’ 100 breaststroke last November at the MHSAA Division I Championships, lowering a seven-year-old mark previously held by six-time All-American Miranda Tucker.

Now a senior with Livonia Stevenson High School, Siroky is still swimming despite her future NCAA career being on the ice.

Over the weekend, Siroky posted some blistering times at the Pioneer Classic, an early-season MHSAA meet featuring seven different schools.

Siroky went two-for-two individually, most notably putting up a time of 1:00.77 in the 100 breast  to near her best time and state record set last year, winning by more than five seconds.

In what is a relatively thin breaststroking class in terms of depth (HS class of 2023), Siroky would’ve been a highly sought after recruit had she opted to swim in college instead of playing hockey.

This article came up again so I figured I’d mention that she’s also one of the very few female skaters to play high school boys hockey! Extremely good athlete all around and I’m excited to watch her at UMD.

Her stroke isn’t legal. Arms need to be touching the water or its butterfly. Would be called in a USA meet in a second.

While it’s very close, when I went frame-by-frame, I couldn’t actually identify any moment where her elbows are out of the water. It’s kind of an interesting technique – she starts her recovery with a similar motion to the swimmers we all know who infamously get called for this, but she drops her hands back down before finishing the extension, which keeps her elbows in the water. Most of the notorious swimmers keep their hands high throughout the recovery, which pops the elbows out at the end.

She’s right on the edge, and it’s hard… Read more »

Many have videos of it and still frames. Arms and elbows definitely out of the water. More so at the beginning of the races before she tires out. Don’t get us wrong- gifted athlete and would be able to correct it and still swim fast.

Maybe there are other videos showing otherwise, but this clip in the tweet looks clean to me.

We noticed this last weekend too. Elbows out of the water not even a question. Can’t say it’s just strength either. Men don’t do it. Plus it’s a technique call that’s very obvious. Don’t mean to bring anyone down but it is what it is.

Still waiting on someone to produce evidence of this “very obvious” violation. Only video presented so far is legal.

Not everyone YouTubes their videos. Just go look at her own Instagram account posted photo of her arms and elbows all the way out. Provide your email and I’ll share it for people to send you the photos. It’s not even debatable. Fly arms- very wide breast kick. Simple fixes that she could make but probably doesn’t even know just like she was unaware at the state meet that she can’t flinch on the block.

She has 5 photos on Instagram, and none of them are of her swimming breaststroke.

This thread is getting a little uncomfortable.

Interesting that it was literally just removed. This is a sports site discussing sports. You continue to respond to our observation asking for photos and videos which we cannot upload to this site unless we created a YouTube account to do so. THAT would be uncomfortable. It’s ok if you don’t want to agree with us. We are ok with that.

Unfortunately her stroke isn’t legal and wouldn’t hold up in a USA meet. Her entire arms (and elbows) are completely out of the water’s surface on every stroke. It’s essentially fly arms.

yes and it’s getting more noticeable every year

Was surprised when she got left off of the U18 roster. Happy to see she’s not letting it slow her down though!

Do you mean U18 for hockey or swimming? If for swimming, she has never swam a club meet or trained with a club other than summer club. No times in USA Swim database.

Seems like she has zero interest in being on any U18 swimming roster. And is a way better swimmer than 1000s of girls who do.

Yowza…very impressive…you have a lot of successful 2 sport water athletes (Biondi etc) who swam/dove/water polo, but I can’t think of anyone who has excelled in both the liquid and solid form of H20….if that hockey career doesn’t pan out, I’m pretty sure a transfer to Minneapolis for the swim team would work out well for her!

Unreal! Good for her!

As we learned earlier this year, God supports team sports like football. But not swimming or something. Just FYI.

Fr fr, God doesn’t swim in the water, he walks on it.