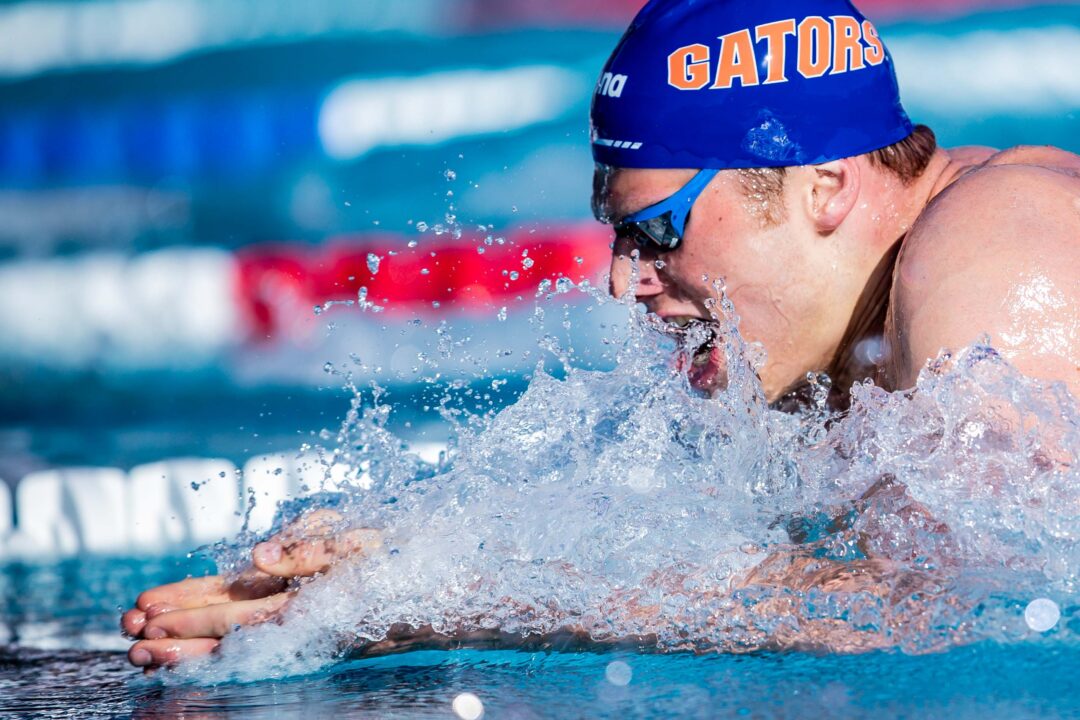 Hillis was second in the 100 breast at 2021 NCAAs and finished sixth in the event this past March. He also was 14th in the 200 breast at 2022 NCAAs. Archive photo via Jack Spitser/Spitser Photography

2021 NCAA runner-up in the men’s 100 breaststroke Dillon Hillis will be returning to Florida to use his COVID-19 fifth year of eligibility. Hillis will be finishing up his major in geography as well as his minor in mass communications.

Hillis has spent his first four years as a Gator. This past season, Hillis competed for the Gators at SECs in the 200 medley relay as well as the 200 IM but eventually scratched the rest of the meet. He swam a week later at the Bulldog Invite where he swam the 100 (51.32) and 200 (1:52.43) breaststrokes. That was his first time ever under the 1:55 mark.

He went on to compete at NCAAs where he finished sixth in the 100 breast (51.24) and 14th in the 200 breast (1:52.12). Notably, his 200 breast was another personal best time. He also was Florida’s sixth highest individual scorer at NCAAs as he scored a total of 16 individual points.

Hillis had a huge junior season in 2021 as he finished second behind Minnesota’s Max McHugh in the 100 breast at NCAAs swimming a 50.92. Notably, McHugh is also taking a fifth year so expect to see the two battle it out at NCAAs again.

His personal best times are:

The return of Hillis is huge for the Gators as the Florida men are the defending SEC conference champions and went on to finish third at NCAAs. In addition to scoring 16 individual points, Hillis was a member of Florida’s 2022 winning 200 medley relay as well as their third place finishing 400 medley relay. The 200 medley relay also set an NCAA record in the process. Both of those relays return the first three legs but graduate both of their freestyle legs.

The 100 breaststroke is shaping up to be a very competitive race this upcoming season. With the addition of Hillis to the list of fifth years, all four of last years seniors in the event have announced that they will be taking a fifth year. The list of four includes Hillis, McHugh of Minnesota, Cal’s Reece Whitley, and Tennessee’s Jarel Dillard.

Hillis told SwimSwam his motivation for returning for a fifth year was because “swimming for UF is one of the greatest honors of my life. Being a Gator for the past 4 years has been invaluable. My teammates are incredible and the experiences I have gained by being a Gator are unmatched. Furthermore, being able to continue training under Coach Nesty’s brilliant program will allow me to further my success both in and out of the pool. In my fifth year, I hope to play my part in the Gators program greatness. Our coaches and staff are truly exceptional and there are still amazing things I want to accomplish with them and my teammates!”