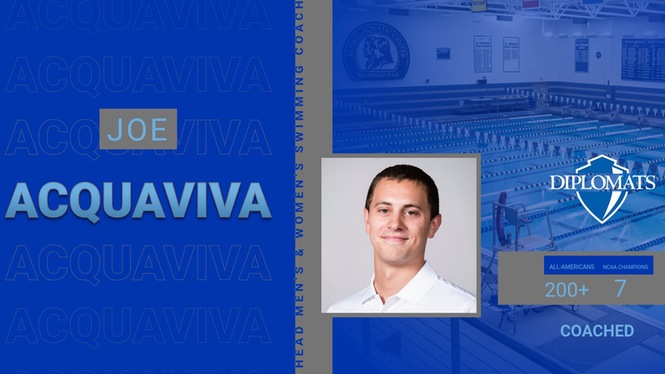 LANCASTER, Pa. – Franklin & Marshall Director of Athletics & Recreation Lauren Packer Webster has announced the appointment of Joe Acquaviva as the next head coach of the men’s and women’s swimming teams. Acquaviva joins the Diplomats after spending a record-breaking five seasons as the head assistant and associate head coach at Tufts University.

“We are very excited to have Joe Acquaviva join Franklin & Marshall as our head swimming coach,” stated Packer Webster. “Joe has a demonstrated history of leading student-athletes to incredible success both academically and athletically. I know that his leadership skills and championship mindset will allow our teams and student-athletes to build on the record-breaking success that they have had in recent seasons.”

“I am excited and honored to have the opportunity to become the head coach at Franklin & Marshall College,” said Acquaviva. “I would like to thank Lauren Packer Webster and the entire search committee for introducing me to the wonderful close-knit community at F&M. I cannot wait to begin working with the student-athletes and help write the next chapter in our program’s swimming history books.”

Prior to joining the Tufts coaching staff, Acquaviva spent one season as an assistant coach at his alma mater – Johns Hopkins. During his six combined seasons as an assistant coach, Acquaviva mentored over 200 All-Americans, seven national champions, one national record holder, an NCAA Division III Swimmer of the Year, and two representatives at both the 2015 World Championships and 2016 Summer Olympics.

A 2014 graduate of Johns Hopkins University, Acquaviva was a four-year letter winner and team captain as a senior for the Blue Jays. During his competitive career, he was 10-time All-American, a College Swimming Coaches Association of America (CSCAA) Scholar All-American, and an NCAA national champion as part of the 800 freestyle relay. In the year following his graduation, Acquaviva was on staff when the program had one NCAA Postgraduate Scholar and NCAA Elite 89 Award recipient. During that same year, Acquaviva obtained his master’s degree from the Johns Hopkins Bloomberg School of Public Health.

Before joining the coaching ranks full time, Acquaviva spent two years as a water polo coach at the club and high school levels with the William Penn Charter School. In addition to the teams finishing with some of the highest point totals in the school’s illustrious history at the Eastern Championships, they were also home to the 2016-2017 Male High School Swimmer of the Year. Acquaviva has also coached at the Plymouth and Ply-Mar Swim clubs since June of 2011.