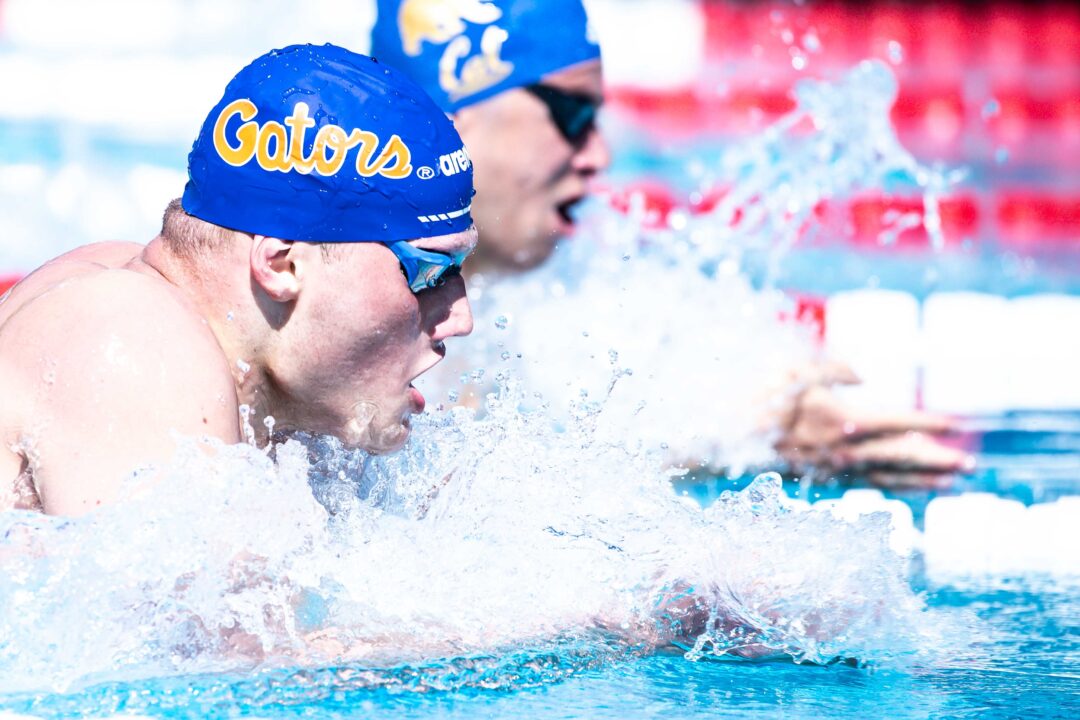 Dillon Hillis is the second individual SEC Champion that has had to withdraw from this meet for the Florida Gators. He raced on Tuesday. Archive photo via Jack Spitser/Spitser Photography

University of Florida swimmer Dillon Hillis, the defending SEC Champion in the 100 breaststroke, does not appear on Friday’s prelims heat sheets in the event.

Hillis swam the breaststroke leg of Florida’s 200 medley relay on Tuesday to open the meet as part of their SEC Record. A spokesperson for the University of Florida said that she had no information about Hillis’ absence, and Hillis has not responded to a request for comment.

That’s another big blow for the Gators, who are already missing defending NCAA mile champion Bobby Finke in COVID-19 health and safety protocols.

Hillis and Finke are roommates.

Repeating was already going to be a tough task with a number of new contenders: notably Reid Mikuta of Auburn and Derek Maas of Alabama, the top two seeds who didn’t make the A-Final at last year’s meet. Maas becomes the favorite in that race after a 22.6 medley relay split that is one of the fastest ever.

He is one of four big scratches on the day – a relatively-light day of withdrawals from the meet.

Tennessee freshman Ellen Walshe, who won the 400 IM and 100 fly in a crazy back-to-back double on Thursday, will get a much-earned session off. She was the top seed in the 200 fly coming into the meet.

The move had to happen – along with winning the 200 IM on Wednesday, she has already raced her allotted three individual events.

She still might swim in finals on Tennessee’s 400 medley relay, but at least she’ll have 24 hours to recover from Thursday.

Alexis Yager of Tennessee is out of the 100 breaststroke. She was the 5th seed in that race after going a best time of 59.84 in the event mid-season. After swimming the 200 IM (6th place) and 400 IM (8th place), she’ll save her third individual event for the 200 breast on Saturday, where she’s the #3 seed.

The other top 10 scratch was also not a surprise: Georgia’s Luca Urlando has dropped the 100 backstroke, where he was the pre-scratch 4th seed. After winning the 200 IM and 100 fly over the last two days, he’ll swim the 200 fly, where he’s a big favorite, for his final individual event on Friday

There is one big surprise entry – Georgia freshman Matt Sates will race the 200 fly out of heat 1. He doesn’t have a yards time in that event, and so is the last seed in the race.

Sates needs a day 3 event at NCAAs.. what else would his options be? 100 free is a log jam, but he could pick up a cut leading off the 4FRR on the last day at SECs. Leaves the mile, 2Fly, 2BK, 2BR. UGA isn’t winning SECs, may as well explore events, one he’ll likely final in.

Re Sates not swimming IM, It takes some time and practice to transition from long course to SCY in this event due to the stroke transitions somehow appear to be more difficult for the swimmers coming from LCM to SCY.

isn’t he coming from SCM? Sates didnt have his major breakout in LCM