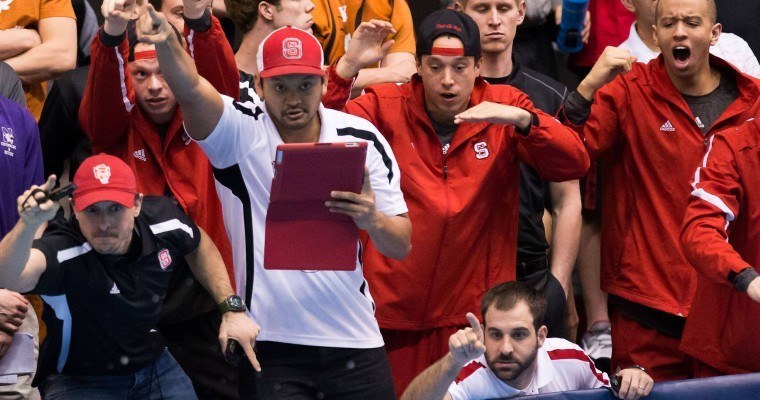 NC State won 9 of the 10 swimming events at the meet's opening session and swept the diving boards to jump to an early team points lead on both sides. Archive photo via Tim Binning/TheSwimPictures.com

North Carolina State University is hosting the 3rd annual All-NC Invite, bringing together top swim teams from across the state of North Carolina. With the state’s other major power – the UNC Tar Heels – not in attendance, though, it’s been the host Wolfpack that have been dominating the pool.

NC State won 9 of the 10 swimming events at the meet’s opening session and swept the diving boards to jump to an early team points lead on both sides.

NC State kicked things off with a 1:20.96 performance to win the 200 free relay. That was highlighted by a blazing 19.41 from Simonas Bilis on the third leg. Bilis was a big part of NC State’s huge post-season relays last year, and he looks to be picking up right where he left off for the Pack. Freshman Ryan Held was also impressive, splitting 20.19 on the anchor leg.

The session closed with the 400 medley relay. The Wolfpack once again triumphed, going 3:18.00 to win by 6 seconds. That was courtesy of a 42.84 anchor split from Bilis, who was a relay monster for the team on the day despite not competing in an individual event.

The first day also featured the 3-meter springboard event in diving, with NC State’s Grant Saale winning with a score of 336.75.

The ladies of NC State jumped out to an early lead of their own, headed by a tight intrasquad battle in the 200 free relay. The A squad picked up the win in 1:32.98 with the B team going 1:33.00 for second.

The splits were pretty even all around. The winning crew got a 23.18 leadoff leg from Lauren Poli, and also saw Natalie Labonge flirt with a 22-second split. She wound up going 23.02. The other NC State crew actually had the two fastest splits, with Rikki Bonnema (22.78) and Ashlyn Koletic (22.96) but wasn’t quite consistent enough to pick up the win.

The only event to slip away from the Wolfpack on the night was the women’s 200 IM, where East Carolina’s Bailie Monahan went 2:06.41 to pace the field. That was enough to knock off Lauren Rhodes (2:07.34) for NC State.

In the 50 free, relay hero Rikki Bonnema returned to go 22.92 for the win. That’s a very solid swim for her, considering she was just 22.78 with a relay exchange earlier in the session. Lauren Poli also bettered her relay leadoff time, going 23.05 for second place.

NC State won the women’s 400 medley relay as well, with their B team triumphing over the A. Alexa Zevnik led off in 54.43 to stake her team to a big lead, and Ashlyn Koletic delivered the finishing blow on butterfly with a 55.50. That was enough to go 3:47.10 and beat the A team’s 3:48.75. That second-place crew had the fastest breaststroker (Kayla Brumbaum at 1:02.91) and freestyler (Natalie Labonge at 50.50).

The meet continues with a morning and evening session tomorrow.

Now I’m finna let you finish in a moment nc state but the real mvp this meet is saint Andrews. They brought the heat with the lead of a foreigner whose home country has a dragon on the flag. That by default means they win the meet hands down.

What if harryp is actually Austin Temple, a former member of harrison pierce’s club team Tide. Harryp seems to always makes comments about Texas, where Temple currently goes. Coincidence? I think not.