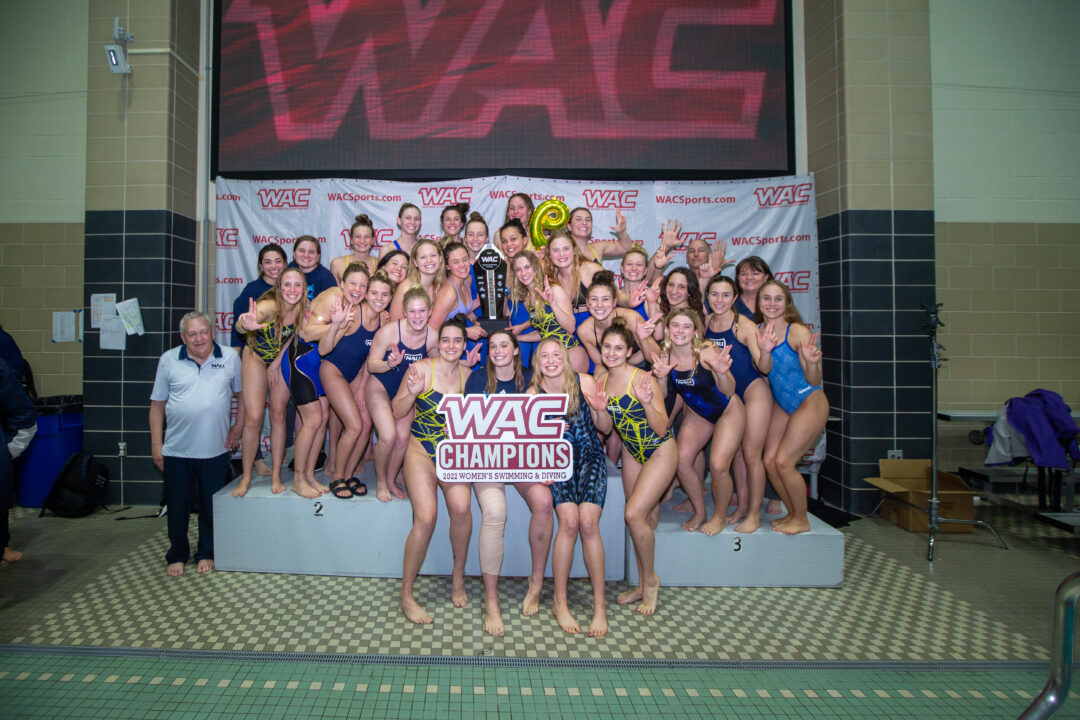 This was the second consecutive WAC Championship title for UNLV men under head coach Ben Loorz.

The Rebels kicked off the finals session with a 1-2-3 finish in the men’s 1650 led by Cameron Castro with a time of 15:13.60. First through 3rd place was only separated by 7 seconds. Christopher Mykkanen took 2nd while Andrew Navarro placed 3rd. The top 4 finishers were under the NCAA ‘B’ cut.

The NAU women kept up their momentum in the 1650 free where Casey Craffey earned 1st place by more than 20 seconds with a time of 16:20.59, about 2 seconds off their school record from 1994. She was the only swimmer under the NCAA ‘B’ cut.

UNLV had a 1-2 finish in the men’s 200 back led by school record-holder Panos Bolanos in a time of 1:41.60, within .8 of the WAC Conference record. Bolanos, a junior, has now three-peated this event and is the second Rebel in history to ever do so in any event.

He was the only swimmer under the NCAA ‘B’ cut (which he crushed by 3.4 seconds) while the second-place finisher was McKay Mickelson (1:45.64).

Air Force’s Wen Zhang completed a freestyle sweep after winning the 500 on Thursday, 200 on Friday, and now the 100 free tonight in a school-record time of 42.97. He narrowly out-touched second-place finisher Jack Armstrong of Grand Canyon by .04.

The top 6 swimers in this event earned NCAA ‘B’ cuts.

In the women’s 100 free, Northern Colorado’s Madelyn Moore took 1st place with a lifetime best time of 49.10. Grand Canyon’s Maria Brunlehner earned 2nd (49.41) as the last swimmer under the NCAA ‘B’ cut.

Cal Baptist’s star breaststroker Jonathan Reiter won the 200 breast with a time of 1:56.10, out-touching UNLV’s Adnan Beji who placed 2nd by .33. A total of 4 swimmers downed the under the NCAA ‘B’ cut in this event.

Northern Arizona earned some big points in the women’s 200 breast where their own Haley Mayhew touched the wall first with a time of 2:15.56, a second and a half off the NCAA ‘B’ cut. Dixie State’s Skyler Lyon snagged 2nd place (2:16.10).

The final individual event of the meet was the 200 fly where Air Force’s Adam Grimm and Andrew Limpert went 1-2 in the men’s event. Grimm touched the wall first at 1:44.28, .66 ahead of his teammate. The top two swimmers cracked the NCAA ‘B’ cut.

Grand Canyon’s Aleksandra Wegrzynowska took 2nd place (1:58.63) and the top three finishers were under the NCAA ‘B’ cut here.