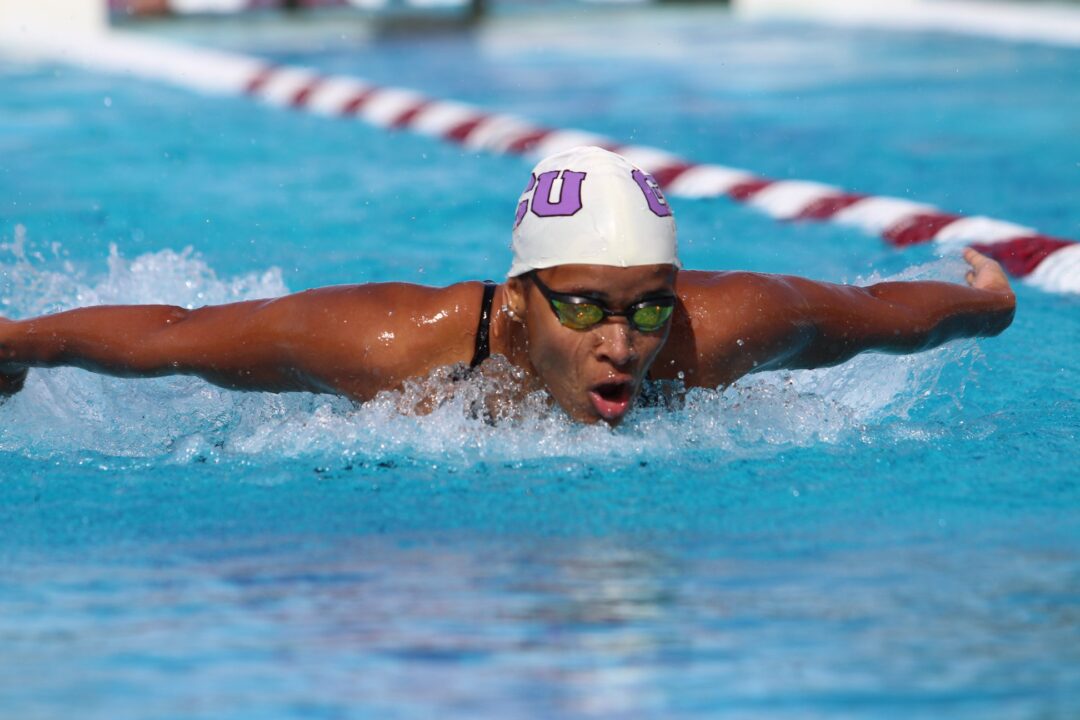 On the Lookout (Stars and Showdown Races)

The sprint freestyle events were dominated by Northern Colorado, NMSU, and GCU in 2021 and they look to be going that way again. UNC senior Madelyn Moore will defend both her championship titles in the 50 and 100 free.

NMSU and GCU each had three swimmers in the 100 free ‘A’ final, racking up a serious amount of points. GCU redshirt senior Emily Muteti was the only other finalist to break 50.00 and could threaten Moore’s title this season alongside her freshman teammate Maria Brunlehner.

The 100 breast is anyone’s game this season – NAU’s Hope Williams, the defending champion in the 100 breast and 200 breast, graduated last year and is leaving the door open for a new champion. DSU took 2nd through 4th place in the 100, led by Haley Altman (who is not on the roster this year.)

With defending 200 fly champion Maddie Seidl of NAU graduated, we can look forward to a rematch of UNC sophomore Payton Irwin and NAU’s Rey who tied for 2nd. GCU freshman Aleksandra Wegrzynowska has the fastest season-best time with a 2:01.14.

NAU is looking to follow up their commanding lead in diving last season where sophomore diver Victoria Knapp dominated one-meter and three-meter as a freshman in 2021. Her junior teammate Emily Luberto won the platform event with a lead of 10 points over the field.

UNLV men are a powerhouse in distance races. They swept the 500 free (1st through 5th place) last season in a move spearheaded by the now-graduated Vuk Celic. Now junior Chris Mykkannen leads the charge. In the 1650, UNLV claimed 1st through 4th place last season, also led by Celic, followed by junior Cameron Castro and Mykkanen.

Air Force’s Isaac Gwin (who won gold in the 200 IM, 100 free, and 100 back last season) is not on their roster this year,  leaving an opening for UNLV junior Panos Bolanos who took 2nd in the 100 back and won the 200 back with a 2 second lead over the field.

UNLV senior Sam Willstrop’s biggest competition in defending his 100 breast title is his freshman teammate Adnan Beji who posted a 52.98 to rival his season-best of 52.74. They’re the fastest in the conference by more than one-third of a second.

In diving, CBU’s Evan Honer is the defending champion in the men’s three-meter, one-meter, and platform events. He dominated the one-meter, winning by 45 points, while he narrowly won platform by 6 points. His closest competition was current Air Force senior Cole Armagost.

Sophomore Raphaela Nakashima and freshman Maria Brunlehner are projected to score the most points (54 each) for Grand Canyon. Brunlehner swims sprint freestyle and her season-best time projects to place 2nd in the 100 free, win the 200 IM while Nakashima looks to win the 100 and 200 breaststroke.

It’s set up to be a tight race for third in team points with NMSU and UNC separated by 2 points on Swimulator.

Panos Bolanos is projected to score the most points for UNLV (57). His season-best times predict he will place 2nd in the 200 fly, and win the 100 and 200 back.

Jack Armstrong’s season-best times rank him first in the 50 and 100 free and third in the 100 fly, projecting him to score the most points for Grand Canyon (56).

On paper, the men’s team scores seem to be more decided than the women’s with Cal Baptist in 4th place and trailing Air Force by less than 50 points.

What conference does CSU bakersfield compete in these days? I think they used to be in the WAC for all sports but left recently for (non-swimming) Big West