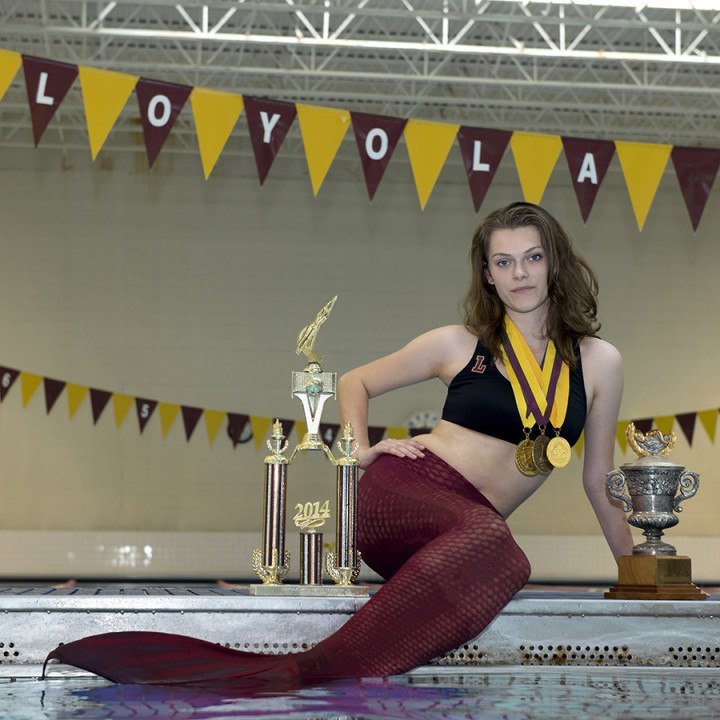 No one was more excited to hear about the new swim team at Loyola University New Orleans than chemistry senior Rachel Dufour, ’16. That is, until the National Association of Athletics, or NAA, the governing body of collegiate competition, barred her from competing.

“Complaints have been lodged that the Loyola University New Orleans swim team has an unfair advantage,” the NAA statement reads.

That advantage is Dufour’s four-year experience as an amateur mermaid. A staple of the Loyola community, the Loyola senior can be spotted at campus events, at local parties, and in the pool at the University Sports Complex absolutely destroying people in Sharks and Minnows.

According to a rival team’s coach, who requested anonymity for this interview, it’s not just the speed that the fish-phenom possesses that’s been called into question — but whether she is eligible for collegiate competition at all.

“It’s been rumored that she received payment for things like birthday parties, which calls into question her eligibility,” the source said. “That would make her a professional mermaid, not an amateur.”

Excited to branch out and put her abilities to the test, Dufour made quite a splash at the swim team’s try-outs, shattering long-held nationwide records in several of her trial runs.

Natal, of course, is referencing a similar controversy that unfolded during Beijing’s Summer Olympic Games in 2008, in which Speedo’s LZR Racer suit was thought by some to have given an unfair advantage to record-breaking competitors such as Michael Phelps and Rebecca Adlington.

Sitting poolside in her new maroon-and-gold Loyola uniform, which offers no special advantage other than Wolf Pack pride, Dufour explained somewhat dejectedly that she was still only testing the waters, having attended only three practices before the complaints came rolling in.

She went on to say that mermaids are generally peaceful and although they are attracted to shiny things like medals, that’s not what fuels her passion for the pond. She just wants to swim, and she’s a little upset to be at the center of the controversy.

But she maintains that change comes from speaking up, that it starts with an individual fighting against the current.

“I don’t want to have to explain to my kids that, ‘Oh, it was a different time; the system just didn’t allow me to swim competitively,’” she said. “I want to explain to them that I flipped off the discrimination and did it anyway.”

Fortunately, this individual is not fighting alone. Both the Loyola swim team and the student body have offered an outpouring of support.

“We have no intention of accepting her apology,” Natal said in an official statement. “We’ve instead demanded one from the NAA, and we have requested that the association expedite its final decision. Rachel Dufour is a gifted athlete and a hard worker. She deserves to swim.”

Dufour said she remains optimistic about the situation but harbors real anxiety over her career options should she not be allowed to compete.

“I’ve known a lot of girls who got their start as amateur mermaids and ended up in some shady stuff,” she said. “If you can compete, you stand to qualify for the Olympic swim team. That’s what I want to do. I don’t want to end up on the Las Vegas Strip or worse—Disney World.”

Students have shown their support via a series of “Fin It to Win It” protests and social media channels, using the hashtag #JustKeepSwimming on Twitter and Instagram.

“I really am touched,” Dufour said. “Little Nemo is one of my favorites. After the Little Mermaid, of course.”

The next “Fin It to Win It” event will be a fish fry held April 1 in the Peace Quad. Students are encouraged to come in costume and to sign up to play pool games with Dufour as she awaits the NAA’s decision.

“I’m anxious to hear the verdict,” Dufour said. “But for a little while, playing Marco Polo with the nerds in the Rec Plex is going to have to tide me over. When I finally come up for air, I’ll know that I’ve fought for what I believe in and that I have the support of an amazing community. Until we hear back from the NAA, I’ll just have to go with the flow. Hopefully my actions will help lure others to the sport, as well.”

Out of concerns regarding compensation, Dufour is requesting recommendations for new pool games, in lieu of donations. To submit suggestions or book her for an event, write to [email protected]

For media interviews or high-resolution photos, please contact the Office of Public Affairs. Please note this is an April Fools’ Day joke. We hope you enjoyed the humor. More about Loyola’s exciting and very real newswim team is available online.

This is appalling. I can’t belive in this day and age that they won’t let this poor mermaid swim. All she wants to do is use her god given talents and is being denied!

I have seen her race in person. I think they did the right thing to ban her.

But, what if she identifies as an amateur? Shouldn’t she be allowed to participate, then?