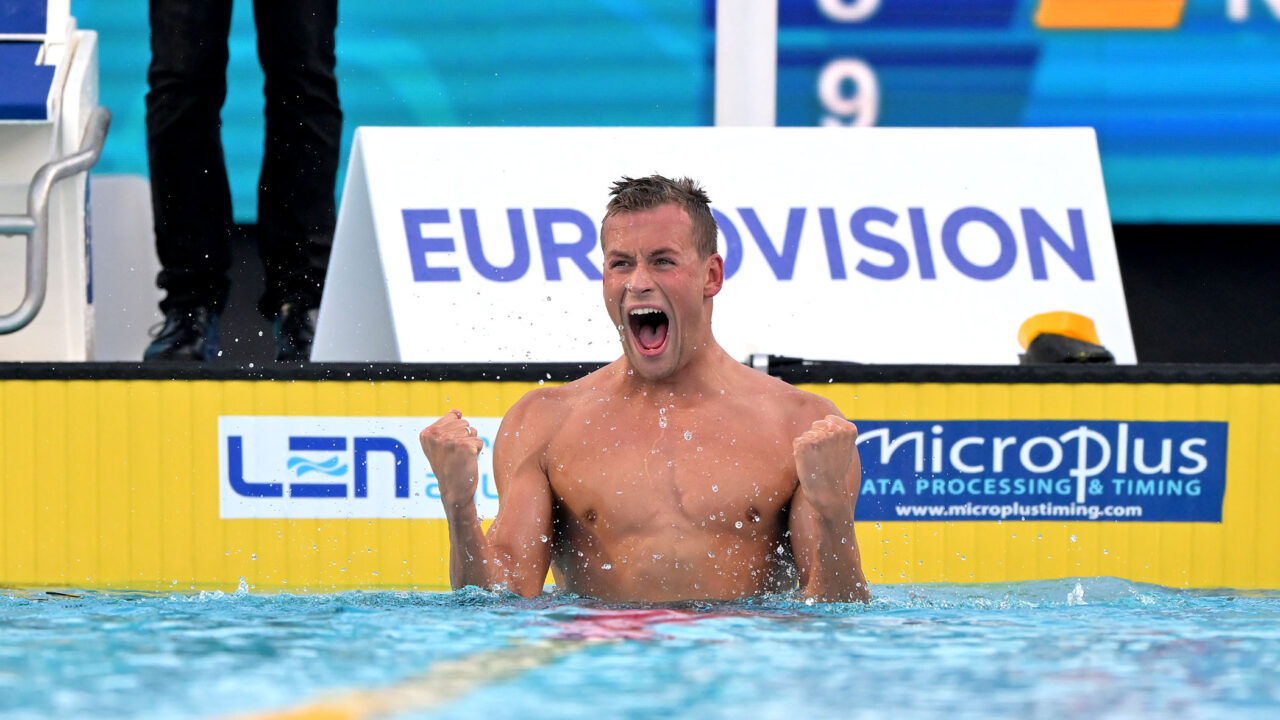 The crowd was behind Italian star Gregorio Paltrinieri in tonight's final of the men's 1500 free, but Ukraine's Mykhailo Romanchuk quickly silenced the stands Current photo via Fabio Cetti

The crowd was behind Italian superstar Gregorio Paltrinieri in tonight’s final of the men’s 1500 free, but Ukraine’s Mykhailo Romanchuk quickly silenced the stands. Early on, Paltrinieri was in control and it seemed like he might pull away from the field in the same manner he did at the World Championships earlier this summer. Right around the 400m mark, however, Romanchuk began to make his move, cutting into Paltrinieri’s lead and officially overtaking him at the 550m mark. From that point, the race was all Romanchuk, as he continued to speed his way down the pool.

He roared into the finish in 14:36.10, establishing a new lifetime best and breaking the Ukrainian Record in the process. There’s a lot to unpack with this swim. Firstly, we have to note that Romanchuk was able to accomplish this feat despite the war waging in his home country currently. When Russia invaded Ukraine earlier in the year, Romanchuk, alongside his fellow Ukrainian swimmers, was displaced. Various swimming federations around Europe opened their arms to become sanctuaries for Ukraine’s swimmers to continue training after fleeing their homes. Romanchuk ended up in Germany, training with fellow distance star Florian Wellbrock, which he’s been doing since mid-March.

The previous Ukrainian Record was set by Romanchuk 4 years ago, at the 2018 European Championships in Glasgow. Romanchuk swam a 14:36.88 for Silver at those Championships, coincidentally touching just behind his current training partner: Florian Wellbrock (14:36.15). Here is a split comparison between Romanchuk’s previous record from 2018 and his performance tonight in Rome:

Despite the swims ultimately coming in a nearly the same time, Romanchuk swam his race tonight rather differently than he did in 2018. In 2018, Romanchuk was steady through the middle of the race and closed very fast. Tonight, he was holding a faster pace early on, and didn’t really fade at any point, but didn’t have nearly the same closing speed he did 4 years ago.

Additionally, Romanchuk’s swim tonight marks the 10th fastest 1500 of all-time. Although he’s not the World Record holder, Paltrinieri has been faster than Romanchuk’s time tonight a whopping 5 times in his career.

that was a smart and beautiful swim, well deserved. He has the World record in him