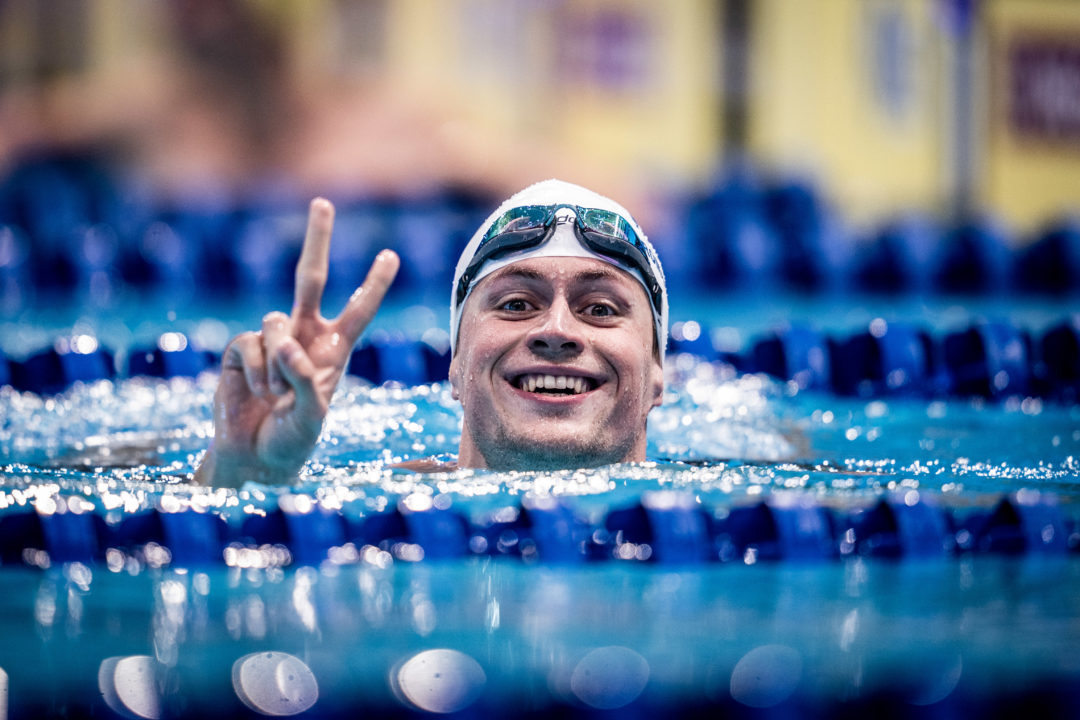 The German Swimming Federation is rallying support for displaced Ukrainians. They're also trying to rally support for a boycott of the World Championships. Archive photo via Mine Kasapoglu/ISL

Ukrainian swimmer Mykhalo Romanchuk, the country’s only medalist in swimming at the Tokyo 2020 Summer Olympics, is training with German rival Florian Wellbrock in Spain, the German Swimming Federation (DSV) revealed this week.

Now the pair are training together at the Sierra Nevada high altitude training center in Spain, along with Wellbrock’s wife and fellow Olympian Sarah (Kohler) Wellbrock.

After returning from Spain next week, Romanchuk will continue training with a number of Germany’s top swimmers at the center in Madgeburg in an effort to prepare for the European Championships in Rome.

The Wellbrocks reached out to Romanchuk to assist with training arrangements after Russia invaded Ukraine three weeks ago.

“I think about Ukraine all the time, about my wife, about my family, my friends. I can’t think about training normally. It’s difficult,” Romanchuk said on ARD. However, he was very grateful for the acceptance by his German sporting peers. “If I hadn’t come here, I probably would have ended my swimming career. Then I would have had to get a gun and go to war.”

The DSV has made significant public efforts to help support refugees of the war in Ukraine, including organizing fundraisers and supply collections. The organization has also welcomed other Ukrainian aquatic athletes into their ranks. Dmytro Ostapenko, a Ukrainian native who now trains divers at the Lepzig federal base drove with other coaches and administrators to the Ukrainian border to gather athletes who fled their home country. The organization has also put out a call to its membership to provide housing and training for Ukrainian athletes in Germany. Swimmer Jacob Heidtmann auctioned off Olympic memorabilia to raise 1,400 Euros ($1,550 USD) for the cause, and Wellbrock has also announced that he will make a donation.

Ukrainian World Record-breaking swimmer Andrii Govorov, who lives in Germany, has set up two swimming camps that collected about 8,000 Euros ($8,800), among other donations he has collected for supporting children, humanitarian aid, and future reconstruction in Ukraine.

While the DSV has not publicly announced a withdrawal from the World Championships in protest of Russian and Belarusian, he did express the potential for a boycott in a letter to athletes.

After the German Ministry of Interior recently announced that they would not provide funding for any German athletes to participate in “competitions with athletes from the Russian Federation and the Republic of Belarus.”

According to FAZ, DSV President Marco Troll told athletes that if Russian and Belarusian athletes are competing, German athletes will likely not.

“The German Swimming Association cannot take part in the World Championships in Budapest if the world association FINA allows Russian and Belarusian athletes to participate, even under a neutral flag this is currently not the right sign,” said Troll.

Troll said that the DSV expressed that position to FINA, and have worked to recruit other European federations to their cause.

The Swiss federation and the Polish federation have both publicly announced that they won’t compete at June’s World Championships in Budapest if Russian and Belarusian athletes are present.

FINA is one of the few international sporting organizations to have not banned Russian and Belarusian athletes over their governments’ attacks on Russia. Even shorter is the list that FINA sits at the head of: international sporting organizations that are still planning to host major events in Russia this year. While minor diving, water polo, and artistic swimming events have been moved, and the World Junior Swimming Championships have been canceled/are in search of a new host, December’s World Short Course Championships are currently still planned to be held in Kazan.

FINA has said that they were skeptical of the legality of banning Russian and Belarusian athletes from competition. That argument was dealt another minor blow when the international Court of Arbitration for Sport on Friday again rejected a request by the Football Union of Russia to stay a FIFA decision to block Russia from being able to participate in international sport, including World Cup qualifying events. CAS previously rejected a request for a stay of a similar decision by UEFA, the European governing body.

FINA said that rather than a blanket ban on Russian athletes and officials at international competitions, they would instead take a case-by-case approach. They have also banned Russian and Belarusian flags and symbols.

The UK government has allowed tennis superstar Daniil Medvedev to compete, but only if denounces Russian President Vladimir Putin. At an Artistic Gymnastics World Cup in Qatar earlier this month, Russian gymnast Ivan Kuliak wore the letter “Z” on his leotard, which is a symbol that has come to represent the Russian army invading Ukraine.

Germany won 8 medals across all disciplines at the 2019 World Aquatics Championships. Their two pool swimming medals came from the Wellbrocks, the country’s distance power couple: Florian won the men’s 1500, while Sarah took silver in the women’s 1500. Florian Wellbrock also won gold in the men’s 10km open water event, while Kohler added a gold in the open water team event.

Germany is among the most-decorated nations in World Championship history. In combination, teams from Germany, West Germany, and East Germany have combined for 305 total medals across all disciplines, including 94 gold medals.

Why European associations of FINA are more decisive about ban of Russian and Belorussian swimmers than USAswimming? Not even a sign from swimmers of not coming to Budapest?
Why doesn’t Australia extend the invitations for CWG for countries who won’t participate at FINA WC? I see that proxy wars are very convenient way for “world diplomacy”
And Mychailo, people either take the gun to defend their country or they don’t. They are not talking about that. They are acting.

I don’t have a definitive answer. I’m certain that proximity has something to do with it.

But also: USA Swimming, when they call FINA to make their feelings known, has a lot more pull. Smaller federations probably need to make public statements more than USA Swimming does. In Germany’s case, at least, they really just communicated it to their athletes, and then the press found out and so they explained their position.

In other words: USA Swimming has a lot more leverage to influence FINA quietly than maybe some European federations do.

If by “quietly” you mean money then Russia with China are much quieter, I think.

Btw the UK is not a thing in CG I think. The four countries of the UK compete separately.

Australia isn’t the host of the Commonwealth Games this year… and they don’t control the invites either.

Thank you for writing these updates! I’m so glad Romanchuk and Govorov are ok and safe. It feels a bit selfish, but they’re such great athletes and I hope they’ll be able to swim lights out for Ukraine come WC this summer and give Ukraine some golds to cheer for (much like Dale Oen’s gold after the horrible Oslo attacks). I imagine it must be very hard for them to be away from their home, and it’s incredible to see the swimming community (like the Wellbrocks) support them during this time.

Class act of kindness by the Wellbrocks 🙌🙌, may all 3 of them gain strength from this mutually beneficial arrangement.