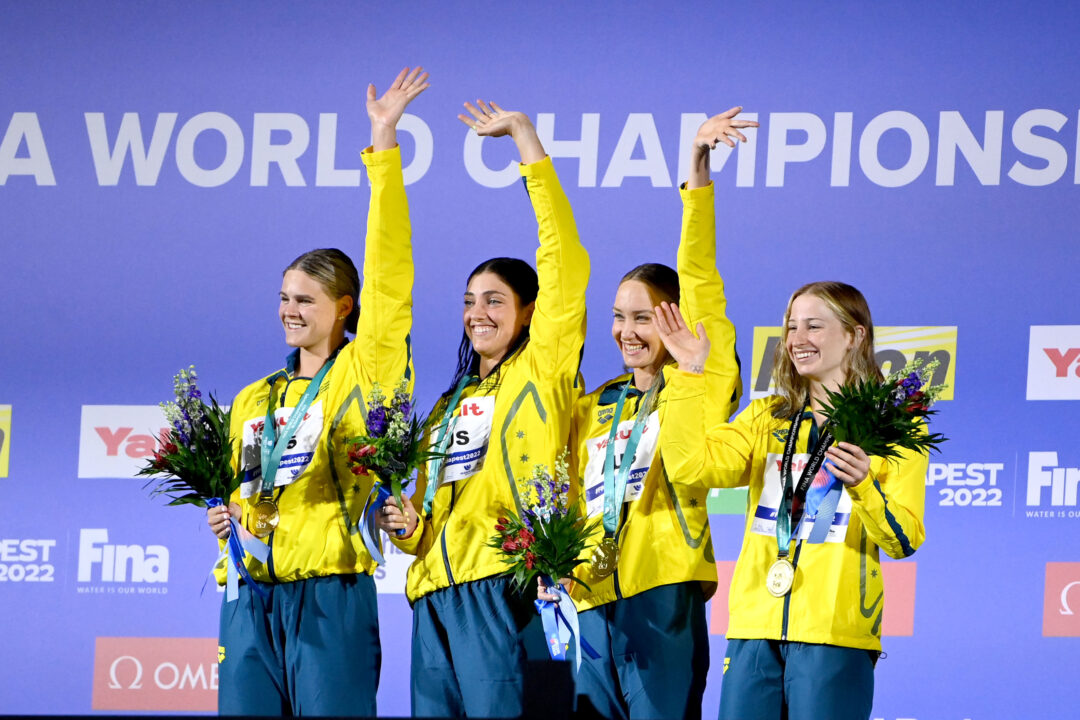 The Australian team, primarily on the women's side, is stacked at the Duel In The Pool, making the home team a big favorite to defeat the Americans. Archive photo via Delly Carr, Swimming Australia

The Duel In The Pool is making its return after a seven-year hiatus, with a three-day showdown between the United States and Australia set to kick off on Friday in Sydney.

On paper, there’s little doubt that the Australians come in with a much deeper roster, particularly on the women’s side, as the Aussies bring in some of the best female swimmers in the sport, led by Emma McKeon, Kaylee McKeown and Mollie O’Callaghan.

This quirky schedule makes predicting how things will transpire virtually impossible, but we’ll do our best.

With multiple relays and skins events, having versatility across the 50 and 100-meter events figures to be the biggest determinator of success at the meet.

There are a lot of intricacies in the events and how they’re scored. Here are a few notes on some of the different races:

According to an outline of the event rules, the “traditional” events will be raced 2v2 (two Aussie and two Americans), the skins will be 3v3, and the relays will be 1v1.

Below, find a breakdown of the top-four swimmers in each 50 and 100-meter event this year (max three per country), along with the 200 IM, to see which side will have the sprint advantage in Sydney.

The advantage for the women is clearly on Australia’s side, and the gap in ability in the sprint freestyle events specifically is significant. Not only will that give Australia a massive boost in the individual and skins events there, but it will also propel them to a lot of success in the relays.

Of course, there are some longer events on the schedule where some of the more distance-oriented names will do some damage.

On the men’s side, the U.S. has distance freestylers like Charlie Clark, Luke Hobson and David Johnston to lean on, while the Aussies have Mack Horton and Brendon Smith.

The American women have Bella Sims and Tylor Mathieu, and Australia has Lani Pallister, Tamsin Cook, and some mid-distance threats including Leah Neale and Madi Wilson.

So much of this is hard to predict given the format, but it’s clear the advantage the Australian women have over the men makes this an uphill climb for the U.S. squad.

Streaming for pool events was posted, will open water be shown anywhere?

no open water for team USA?

2-day pool meet, 19-20 events per day (not to mention multi-swim events/’skins’), bunch of nonsense events… seriously you could pit the USA vs AUS National Teams against each-other in a regular meet (celebrity relay kind of stuff still sounds like a fun addition), where events actually count for records, etc. and have it be much more of a commercial success. They should have an actual swim fan run this.

Side note – is there anywhere one can find Duel in the Pool records? A full list for all the real events?

I think they knew they were never getting the A team from either side so they decided to make it “fun”. It wouldn’t really be fun to watch a schedule with just Olympic events but missing huge stars from each country.

I think it’s pretty universally agreed that this event really shouldn’t have been scheduled this year but since it’s here I’m just trying to have fun with it.

Agree. Let’s just enjoy it for what it is…… a bit of fun really.

Was it really just those 6 individual events plus one relay per gender? That’s like… barely even an event haha

there were more events in previous editions, but I only compiled times for events in this year’s program

To be fair: 39 events over 2 days. 7 of those are para events. The other 32 events have mostly 2 (3 for skins, 4 for relays) swimmers out of 24 for each team. Even the biggest stars on each team won’t be swimming more than 5 events per session surely? And some team members will like only get 2 per session. Smaller volume than ISL which ran for weeks in a row.

It’s easier to do multiple swims in short course than long course.

There is just way too much going on to make any sense of this event. Maybe the US has some swimmers coming in on an end of summer taper but I don’t think it matters for the women. Suspect this may end up being a dud from a competition standpoint

Depends what you mean by that. Will the overall score be competitive? Yes I think so. But that’s only because US men and Aus women will wipe the floor with the competition.

If you mean “will they swim competitive times” then no, very doubtful.

Has Australia’s vaccination policy changed or is MA now vaccinated cause I’m wondering how he got in and Novak Djokovic couldn’t?

The Aussie women are going to show that nobody comes into their house and pushes them around by having some of their best swim in this event. The American women just won’t be able to match up. Its nice to allow some different US women to compete there but when we get drubbed it’s not going to do much for American swimming pride.

There are two things working in the Americans’ favor:

1) SCM (I think the US team, like Beata Nelson, is generally going to fare better in short course than they would in long course)
2) Timing. Some of the US team has had a 6 week cycle since Worlds, others have had a three-plus month cycle since Trials. Australia is just coming back from Commonwealth Games, and I bet many have not been in the pool in 10 days.

But yeah, Australia should win this for sure.

When I emailed Swimming Australia they said it’s in long course. Did they give you different info?

Isn’t Australia at an advantage with SCM, given that they actually swim SCM in Australia, unlike the US where it’s LCM os SCY?

For the most part Australia only cares about LCM, and SCY and SCM are more similar to each other than SCM and LCM.

Almost no one in Australia swims SCM while every American swimmer ever has done a LOT of SCY which is extremely similar to SCM.

Seems like McKeon and Simpson will be getting straight of the plane from Europe to compete at DITP.

They stopped posting insta stories about 24 hours ago so I assume they’re on the trip home now, arrive tomorrow, gives them 2 days to adjust…

I don’t think it’ll really matter. Emma should win her individual events handily even nowhere near her best, while Cody wouldn’t win even if he swam PBs. So the jet lag is probably a non-issue

The Australia depth outmatches that of the US?

That’s fine with me.