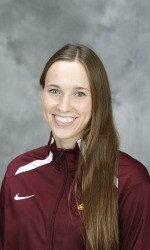 Jessica Plant, a three-time All-American from University of Minnesota, has been chosen as one of two 2015 Wayne Duke Postgraduate Award recipients by the Indianapolis Big Ten Community Partnership. Stock photo via Minnesota Athletics

Michigan’s Maggie MacNeil will swim the 100 free, along with on-fire Northwestern senior Maddie Smith. Phoebe Bacon will swim the 200 back as well.

The final day of the 2021 Big Ten Women’s Swimming Championships in Minneapolis will see Indiana and Northwestern battle for 3rd-place.

Freshman Phoebe Bacon is looking to defend the Badger’s 100 back title (won last year by Beata Nelson.) OSU’s Emily Crane was within .5 of her in prelims.

Ohio State’s dominance continues with 13 returning swims, all in either the A-final or B-final, setting every Buckeye up for picking up double-digit points.

MINNEAPOLIS – Jessica Plant from the University of Minnesota and Campbell Sode from Rutgers University have been chosen as the 2015 Wayne Duke Postgraduate Award recipients by the Indianapolis Big Ten Community Partnership. The award is an annual scholarship recognizing one male and one female Big Ten senior student-athlete pursuing a postgraduate degree for achievements in academics, athletics, extracurricular activities and leadership.

In recognition of the Big Ten’s leadership in fully integrating athletics into the academic mission of its member institutions, the Indianapolis Big Ten Community Partnership initiated the Wayne Duke Postgraduate Award in 2008. Each Big Ten institution was asked to nominate one male and one female student-athlete for 2015, with a $10,000 scholarship awarded to each winner.

The Wayne Duke Postgraduate Award is named for the former Big Ten Conference commissioner who served from 1971-89. While leading the Big Ten, Duke spent much of his time working to improve academic standards and graduation rates for student-athletes. The award is made possible by donations from local corporations and individuals supporting collegiate student-athletes. The Indianapolis Big Ten Community Partnership is comprised of the State of Indiana, City of Indianapolis, Indiana Sports Corp, Pacers Sports & Entertainment, and Visit Indy.

Plant, a swimmer at Minnesota, is a Rhodes Scholarship finalist, two-time Academic All-American, and a three-time Academic All-Big Ten honoree. She enters her final undergraduate academic semester with a 4.0 GPA in her coursework toward her art history and classical civilizations degrees.

Plant serves as a member of the University of Minnesota’s Swimming and Diving leadership council and as a member of the Student-Athlete Advisory Council. Her volunteer work includes the MAGIC program, where she leads activities in elementary schools, promoting education and healthy living, and as a Hope Day volunteer, managing games and playing with children with cancer and other life-threatening illnesses. In 2012, she served as a Golden Eagles volunteer, an after-school program for Native American children in the Minneapolis area.

In the pool, Plant was a member of the Golden Gophers’ 800 freestyle relay team that won the Big Ten title. She is a three-time First-Team All-American and has been named to All-Big Ten first- and second-teams during her career. She was invited to compete for a spot on the Canadian Olympic Team, but declined to continue her academic studies. Plant plans to pursue graduate work in art history and archaeology.

Plant and Sode will be honored during the 44th Annual Big Ten Football Kickoff Luncheon on Friday, July 31, 2015 in Chicago.

About the Big Ten Conference: The Big Ten Conference is an association of world-class universities whose member institutions share a common mission of research, graduate, professional and undergraduate teaching and public service. Founded in 1896, the Big Ten has sustained a comprehensive set of shared practices and policies that enforce the priority of academics in student-athletes’ lives and emphasize the values of integrity, fairness and competitiveness. The broad-based athletic programs of the 14 Big Ten institutions provide nearly $200 million in direct financial aid to almost 9,500 student-athletes for more than 11,000 participation opportunities on 350 teams in 42 different sports. The Big Ten sponsors 28 official conference sports, 14 for men and 14 for women, including the addition of men’s and women’s lacrosse as official sports for the 2014-15 academic year. For more information, visit www.bigten.org.

Congratulations Jessica. I had the pleasure of working with Jessica and her parents with the college recruiting process. This is a well deserved away for an outstanding young lady. Jessica is a shining example of a very successful STUDENT-athlete.