Michigan Men, Women Win Round 1 Of Tripleheader Meet With Louisville 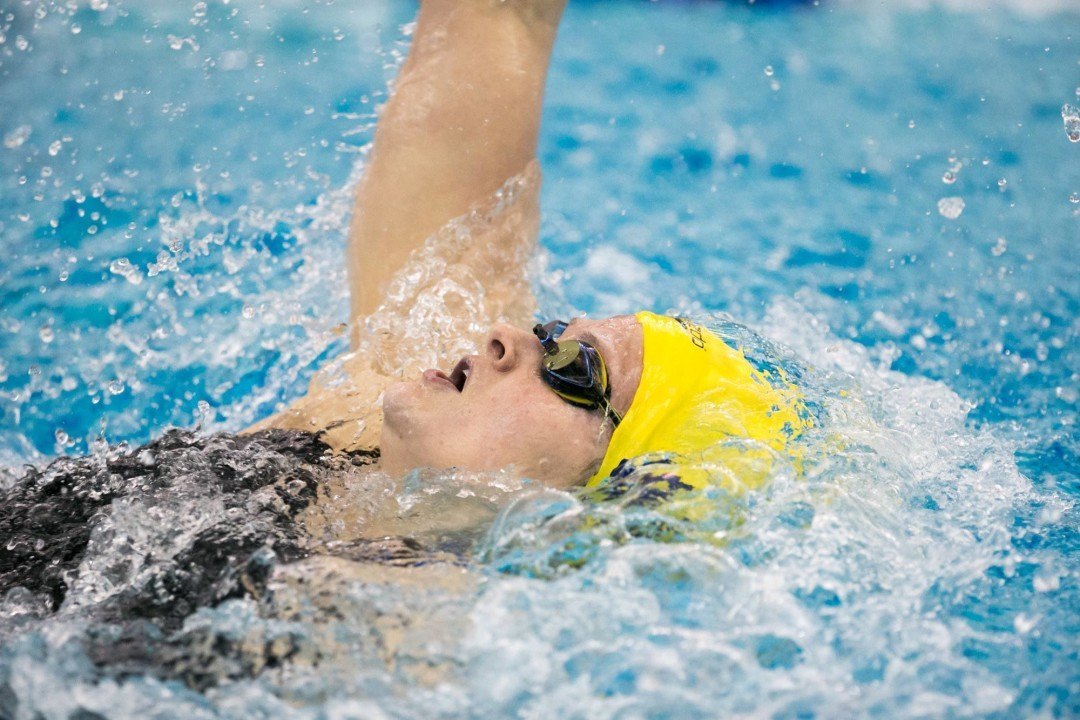 The Michigan Wolverines hosted the Louisville Cardinals to kick off the 2016-17 season at home, with the first session of their 2-day dual meet taking place on Friday. The teams have put an interesting twist on this meet, making it a “tripleheader” that features 3 separately scored sessions. The team that wins 2 of the 3 sessions will win the meet.

You can read more about the tripleheader format and event schedule here.

Also for the Wolverines, Clara Smiddy and Siobhan Haughey each had a dominant performance. Smiddy’s big win came in the 200 back, where her 1:56.97 put her 2 seconds ahead of the field. Haughey won the 100 IM in 55.14, also getting to the wall 1st by 2 seconds.

Grace Oglesby and Andee Cottrell picked up a pair of sprint wins for the Cardinals. Cottrell raced to 1st place in the 50 breast with a 28.25, while Oglesby won the 50 fly in 24.76.

On the men’s side, distance specialist PJ Ransford separated himself from the field by 5 seconds in the 800 yard free, hitting the wall in 7:11.91 for the win. Following that race, the Wolverines went on the sweep tonight’s stroke 50 races, with Vinny Tafuto (21.71) taking the 50 fly and Jacob Montague (25.36) taking the 50 breast.

Louisville’s Trevor Carroll and Grigory Tarasevich put on a show for the Cardinals, each winning an individual event. Carroll picked up a victory in the 200 free, touching the wall in 1:37.51. Tarasevich battled with Michigan’s Tristan Sanders in the 200 back, getting his hand on the wall just 6 hundredths ahead to win the race in 1:45.48.

ANN ARBOR, Mich. — Five student-athletes (four swimmers, one diver) won individual events to propel the University of Michigan men’s swimming and diving team to a 246.5-188.5 victory over Louisville in the first of a best-of-three series on Friday (Oct. 7) at Canham Natatorium. In keeping with the meet’s “tripleheader” format, a roll of the dice determined the distances of the session’s events, producing some rare races.

The Wolverines proved to be the deeper team on Friday, piling up points in events they did not win. In the 200-yard freestyle, senior Jack Mangan and Auböck went 2-3, respectively, while junior Tristan Sanders and fifth-year senior Luke Papendick held the same spots in the 200-yard backstroke. On relays, U-M went 2-3-5-6 in the 400-yard mixed medley relay and 2-3-4 in the 800-yard freestyle relay.

The tripleheader continues tomorrow (Saturday, Oct. 8) at Canham Natatorium with the meet’s second and third sessions at 10 a.m. and 4 p.m., respectively. Admission is free.

ANN ARBOR, Mich. — Behind two wins from sophomore Yirong Bi, the University of Michigan women’s swimming and diving team took the first session in a best-of-three series against Louisville on Friday (Oct. 7), downing the Cardinals, 257-179, inside Canham Natatorium. In keeping with the meet’s “tripleheader” format, a roll of the dice determined the distances of the session’s events, producing some rare races.

Haughey and Smiddy looked sharp in individual action. In her first competitive races since representing Hong Kong in Rio, Haughey won the 100-yard individual medley by nearly two seconds (57.11), while Smiddy led a 1-2-3 effort in the 200-yard backstroke. She touched at 1:56.97 — well under the NCAA ‘B’ standard — and was followed by DeLoof (1:58.92) and freshman Jacqui Schafer (1:59.66).

It was a great night for the divers, as three women secured NCAA Zone Diving qualifying scores on the three-meter springboard. Freshman Kristen Hayden took top honors (312.37), while seniors Allie Murphy (283.35) and Keegan McCaffrey (281.70) also hit the standard in their first opportunity.

The tripleheader continues tomorrow (Saturday, Oct. 8) at Canham Natatorium with the meet’s second and third sessions at 10 a.m. and 4 p.m., respectively. Admission is free.

The University of Louisville swimming and diving teams wrapped up the first day of the dual meet against the University of Michigan in Ann Arbor on Friday night. Louisville fell 246.5-188.5 to the Wolverines in the first of a best-of-three series on Friday (Oct. 7) at Canham Natatorium. In keeping with the meet’s “tripleheader” format, a roll of the dice determined the distances of the session’s events, producing some rare races in the first round of competition in this best-of-three format.

The night started off with the 400-mixed relay ‘A’ team of Grigory Tarasevich, Carlos Claverie, Grace Oglesby, and Mallory Comerford taking first place with a time of 3:26.30. The Cards ‘B’ team of Aaron Greene, Andrea Cottrell, David Boland, and Casey Fanz touched fourth with a time of 3:29.73.

Louisville’s ‘A’ team of Carroll, Lindenbauer, Harting, and Tarasevich took first in the men’s 800-freestyle relay with a time of 6:35.45, while the ‘B’ team of Zoucha, Sam Steele, Christian Garkani, and Andrej Barna touched fifth with a time of 6:52.08.

In the best-of-three series format, the University of Michigan took the first round, defeating Louisville’s men’s and women’s teams 246.5-188.5 and 257-179, respectively.

Louisville will finish the best-of-three series tomorrow in a double-header starting at 10 a.m. and at 4 p.m.