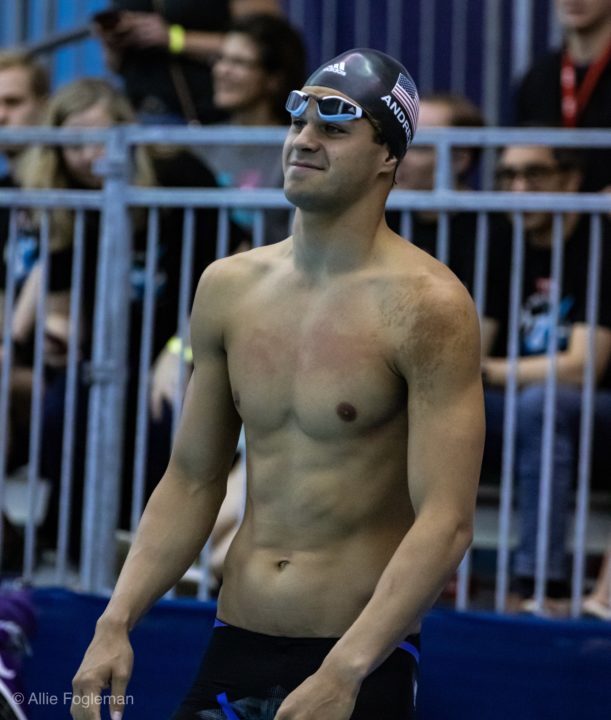 While Andrew was fire on the first three legs of the race, his freestyle was a little shaky with a closing 50 of 30.00. Current photo via Allison Fogleman

Sprint sensation Michael Andrew upset reigning World, Pan Pac, and U.S. National Champion Chase Kalisz tonight in the finals of the men’s 200 IM at the Richmond PSS in a huge new personal best time of 1:57.49. Andrew’s strategy of sprinting the first three legs of the race and out-splitting everybody else in the field on each of them paid off tonight, despite having the 2nd-slowest closing split in the field.

Andrew opened the race under World Record pace with a blazing 24.50 butterfly split, putting himself nearly a full second ahead of everyone else after just 50 meters. Kalisz almost matched Andrew’s backstroke split, hitting a 29.88 to Andrew’s 29.70, but the lead Andrew built on the fly was more-than-enough to hold a big lead after the backstroke, 54.20 to 55.44, respectively.

Bronze medalist Josh Prenot made up some ground on the breaststroke and was the only swimmer other than Andrew to split sub-34, turning in a 33.73 to Andrew’s 33.29, though by by 150, Andrew had a 2-second lead over his nearest competitor, Kalisz.

Andrew’s final time of 1:57.49 not only rockets him to the 4th-fastest in the world this year, but it would have been fast enough to earn him a place in the championship final at the 2017 FINA World Championships.

In spite of his substantial second-and-a-half margin victory over Kalisz, and 3+ second margin over the rest of the field, Andrew had the 2nd-slowest closing split of anybody on Saturday night: 30.00.

While Andrew’s butterfly split tonight was faster than all the opening splits in the men’s 200 IM at the 2017 World Championships; his freestyle, is a full 1.18 seconds behind the slowest freestyle split of the 2017 final in Budapest. That split belonged to Japan’s Daiya Seto, who turned in a 28.82 over the final 50.

Andrew has a history of taking the 200 IM out fast. When he went his former lifetime best time of 1:59.12 a the Indy PSS in 2017, Andrew’s first 50 butterfly was a 24.83–under WR pace. In prelims this morning Andrew opened in a 24.69–under WR pace. Over the middle 100 tonight Andrew distanced himself from his competition, but still faded (relatively speaking) on the final 50 of freestyle.

If Andrew were able to narrow the gap on the rest of the field (or the rest of the world) over the freestyle split and not loose any of the speed he showed tonight on the first 150, his already world-class 200 IM could transform into a particularly keen event for him, and make him a front-runner for one of the coveted two spots on the 2020 Olympic Team in that event.

I will be first to say it. Is this possibly a sign that he doesn’t have the aerobic base he needs to swim a 200 because of USRPT.

He said it in his interview. He hasn’t been training for a 200. He’s been doing his 100 pace work in a 25 yard pool. Pulls out 4th best time in the world on the last day of a meet where he did multiple doubles/triples, and unlike — say Murphy — swam fast prelims and finals. He left the guys with the aerobic base in the dust.

He’s a sprinter who just went 1:57 in the 2IM! The fact is he used his skills and training style to swim his absolute best race. If that includes fading a bit on the freestyle then so be it. Did you actually expect him and Kalisz to swim similar races??

I think it is more his technique isn’t there on free breathing just like his 100 free. He doesn’t breathe on his 50 free so no problem

I agree. It seems he interrupts his body position and during his breathing when he gets tired, snaking his head and upper body to the breathing side, rather than rolling with a solid core. Head position corrections should help.

There’s no question that he has less aerobic base than he would if he were swimming for a high yardage program. But there’s also no question that he’s got more speed than he would have if he were swimming for one of those programs, too. It’s a tradeoff, and last night indicated that it’s not a bad one. Andrew didn’t look as if he was straining to go out in 24.50, which would have been a suicidal pace for just about anyone else. Sure, his last 50 was slow in comparison to other 1:56/1:57 IMers. But one thing that has to be pointed out in this discussion is, that’s not entirely a function of endurance, some of it is that… Read more »

You don’t need to do 6000 meters per day to build up the aerobic capacity for a 2 minute race. Doing USRPT will give you plenty of aerobic base for a 200 IM.

He has more than enough of what you call “aerobic base”. I think it depends more on race strategy. Of course if one goes all out then it’s hard to finish strong. I.e. Pereira or Lochte later in his career with going hard on underwaters. By the way, please explain what is aerobic base?

You aren’t the first to state the obvious

IDGAF how you split your way to a 1:57.49, that’s a legitimately fast time right there. Did we maybe get a glimpse last night of the potential genius behind all this stroke-50’s madness?

What events do you think he’ll do at Tokyo?