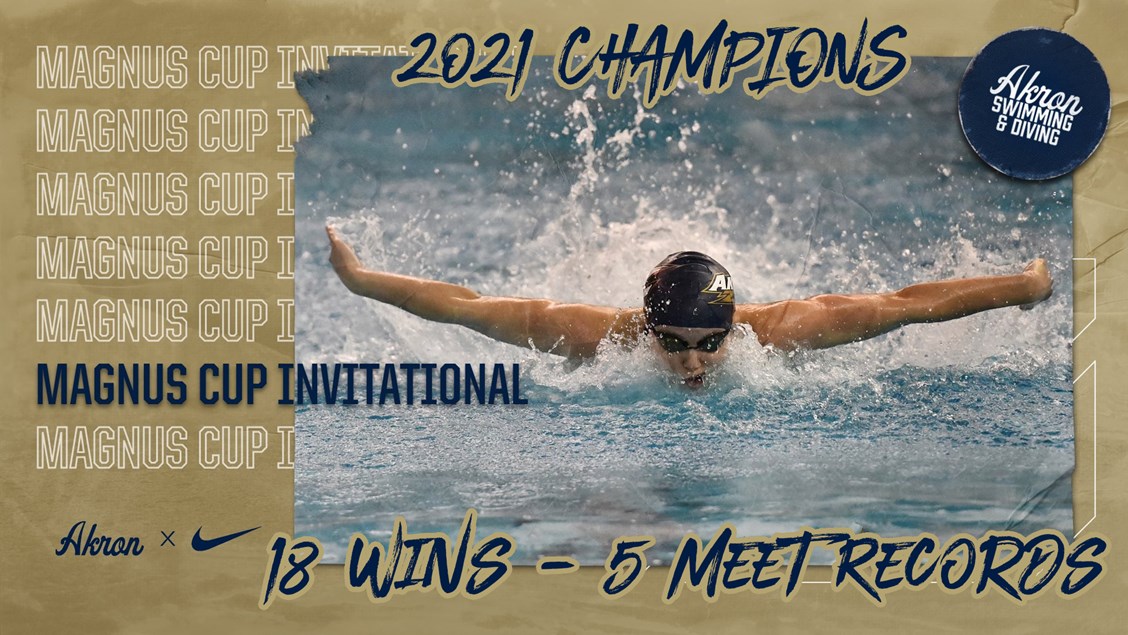 CLEVELAND, Ohio – The No. 24 ranked Akron Zips swimming and diving team dominated the final day of competition, winning 8-of-9 events en route to claiming the 2021 Magnus Cup Invitational Championship by 392 points at the CSU Busbey Natatorium on Saturday.

In the 100-yard freestyle, Watson bested the group with a record-breaking performance, setting a 49.23 meet record, replacing the 49.85 mark set in 2017 by Sadie Fazekas.

Akron will be back in action at Oliver J. Ocasek Natatorium on Friday-Sunday, Dec. 3-5 as the Zips host the 2021 Zippy Invitational, including men’s and women’s teams from Bloomsburg, Clarion, Cornell, Kaiser, Niagara, Oakland and Pennsylvania, while Akron, Buffalo and Toledo will only compete on the women’s side.

CLEVELAND, Ohio – The Akron Zips swimming and diving team claimed 4-of-6 events and set two meet records en route to a 134.50-point advantage after day one of the 2021 Magnus Cup Invitational hosted by Cleveland State at the CSU Busbey Natatorium on Thursday.

The Zips registered 484.50 points without diving results to lead the 11-team women’s field – Ohio is currently second overall with 350 points.

Senior Andrea Fischer (Oak Grove, Minn.) posted the Zips second win of the day, in as many events, while setting a meet record in the 50-yard breaststroke. Fischer posted a new meet record time of 28.64 as teammates junior Sara Bozso (Budapest, Hungary) and Watson finished second (28.74) and third (29.11), respectively.

CLEVELAND, Ohio – The Akron Zips swimming and diving team set two meet records while extending their lead to 215.5 points on Friday at the 2021 Magnus Cup Invitational hosted by Cleveland State at the CSU Busbey Natatorium. Akron leads meet with 1,036.5 points followed by Ohio with 821 points.

Nogaj and Watson followed with back-to-back record-breaking performances to finish first and second in the 100-yard butterfly event. Nogaj stopped the timer with a meet-best 52.87, breaking her own record set in 2017 (53:32). Watson also touched the wall with a faster time than the previous record with a 53.31 second-place effort.

Watson and Nogaj captured another meet standard as the two were joined by juniors Victoria Kaufman (Westminster, Md.) and Weronika Gorecka (Wroclaw, Poland) for the 800-yard freestyle relay. The squad flew to a 7:20.30 time, replacing the 800 Free Relay time of 7:20.59 set by Akron in 2017.

On the boards, junior Paige Kalik (Irwin, Pa.) turned in a pair of dominant performances, winning both the 3-meter and 1-meter diving events. Kalik scored 318.85 on six dives at 3-meters for the win. She posted 58.80 on her best dive, a back 2 1/2 somersault tuck with a 2.8 degree of difficulty. On the 1-meter board, Kalik battled back from a seventh-place dive with a 49.40 forward 2 1/2 somersault pike performance en route to a 261-point total score for the win.

Congrats to the Akron women and CSU men on dominant performances at the MCI. Another story not to be slept on is the rise of Case Western in the Division 3 scene. Coach Doug and his staff are doing a wonderful job this season.

Akron are on fire! @SwimSwam have they hired a new assistant? Seems like this would be one of the more coveted positions if still open?