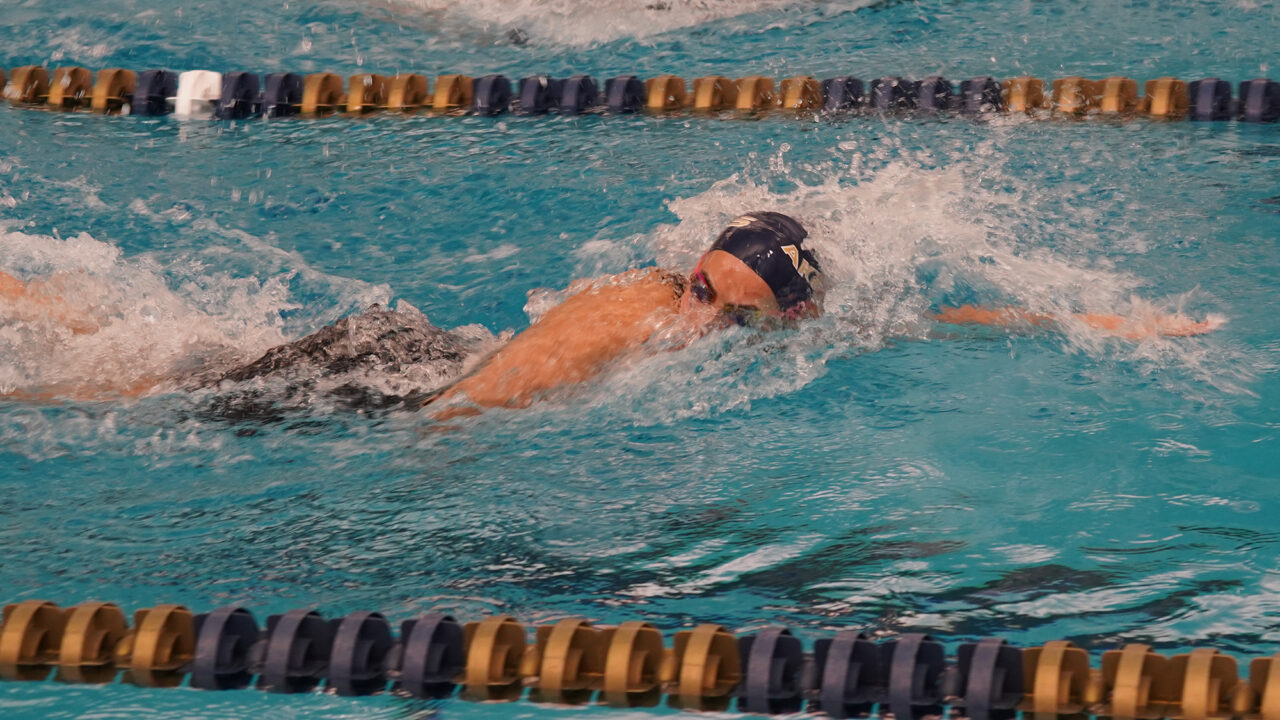 Gatrall ended the meet with 10 wins in 11 starts; the only blemish on her roster was a day 1 relay where Akron touched first, but were disqualified.

On Saturday, the final day of competition, Gatrall added two more individual wins and a relay victory as well. First, in the 200 back, she won in 1:56.67, beating out her teammate Weronika Gorecka. Gorecka is the defending MAC Champion in the event and a 2022 NCAA Championship qualifier.

That 200 backstroke was the only individual event of the meet where Gatrall didn’t hit a lifetime best.

In her next and final individual event, Gatrall won the women’s 100 free in 50.03, her 5th personal best of the weekend. She led another Akron 1-2 finish, this time with Abby Daniel finishing 2nd in 50.51: a personal best for her too.

That swim was almost two seconds ahead of runners-up Toledo, who were led by a 49.94 rolling start from Kennedy Lovell.

The men’s meet continued as it has been for most of the weekend: Xavier and hosts Cleveland State splitting the wins, but Xavier’s superior depth maintained their lead in the team scoring.

Andrew Martin of Xavier led off the day with a 15:28.54 in the 1650 free. Martin swam every distance of freestyle at this meet, and wound up winning the three longer ones. It was the shorter 50 free, though, where he got his only personal best of the meet.

Cleveland State counter-punched in the next event, the men’s 200 backstroke, with their star Paddy Johnston. He won in 1:46.39, which is a personal best time for him and gave him three individual wins as well (100 back, 50 free).

With both teams at full-bore, there was a big final showdown in the men’s 400 free relay. Johnston took Cleveland State out to an early lead with a 44.28 opening leg, the fastest split of the field of any kind, but Xavier clawed back with Martin on their 2nd leg (44.60). Cleveland State grew their lead again on the 3rd leg thanks to a 44.52 split from Connor Green, which gave the host team from Cleveland State a big lead. On paper, the race was over there, but a trasncendent split from Gage Hannewyk of Xavier made it competitive at the finish. He closed nine-tenths on the Cleveland State anchor, Spencer Tussing, with a 44.38 split. That was 1.7 seconds better than his flat-start swim from earlier in the session.

He ran out of room, though, and the final touch had Cleveland State in front in 2:58.97, with Xavier 2nd in 2:59.38. In total, Cleveland State won three relays at the meet, versus just one for Xavier, but Xavier still cruised to a win by almost 200 points.