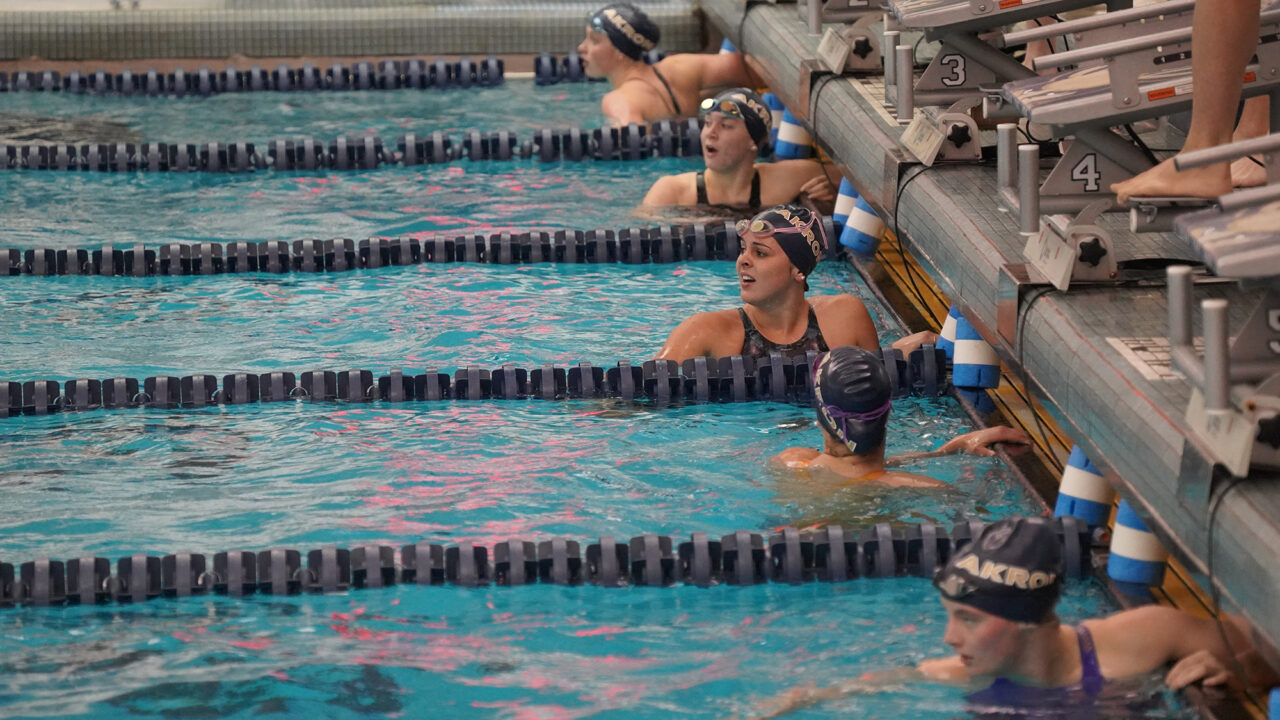 Maddy Gatrall and the Akron Zips continued to dominate the Magnus Cup on Friday, sweeping all of the day's events on the women's side. Archive photo via Akron Athletics

It was another day of domination for Maddy Gatrall and the Akron women on day 2 of the 2022 Magnus Cup Invitational. On the men’s side, hosts Cleveland State and Xavier continued to trade blows, but the Musketeers ultimately extended their lead past 100 points.

After three wins (and a would-have-been win, if it were not for a DQ) on Thursday, Akron junior Maddy Gatrall won four more races on Friday. That was part of a clean sweep of the event titles for the Zips, who have now won all but one women’s event so far at the meet.

Akron’s dominance was so on display that they actually took the top two spots in the relay, and had the two fastest splits on every leg of the relay except for freestyle.

Gatrall won again later in the session in 52.61. That broke the Meet and Pool Records in the event that were set in 2021 by Daisy Platts of Bowling Green State, who would eventually transfer to Auburn.

That time for Gatrall is just-off the 52.46 that it took to qualify for the 2022 NCAA Championships.

Both times for Gatrall are new lifetime bests, and she led a 1-2-3 finish in the 100 backstroke for Akron.

But Xavier began to make hay once the individual races began. Michael Benington completed an IM sweep by winning the 400 IM in 3:56.49 after the relay. Jack Parker (3:57.02) gave the Musketeers a 1-2 finish.

St. Bonaventure picked up their first win of the meet when Alexander Behr won the men’s 100 fly in 47.52. That was a bit of an upset over Johnston of Cleveland State (48.22), given that Johnston entered the meet with a better personal best. Behr, though, registered a seven-tenths improvement in this final to capture the win.

Xavier got another win, this time in record-setting fashion, when Andrew Martin took the men’s 200 free in 1:37.46. That broke his own Meet Record of 1:38.53 from prelims.

Cleveland State got back in the win column in the next race, the 100 breaststroke, where Griffin Manning (54.73) out-touched a school record from IUP’s Thanos Diamantidis (54.80) for the win. But that wasn’t enough to make much of a dent in the scoring gap: where Xavier won, they backed the win with depth. Where Cleveland State won, Xavier was able to fend off any deep cuts to their lead. In this 100 breast, for example, Cleveland State finished 1-9 in the A-final, but Xavier was 3-7-10 to keep pace.

After the loss in the 100 fly, Cleveland State’s Paddy Johnston bounced back to win the 100 back in 48.21. He is the defending Horizon League runner-up in that event. Xavier’s Aiden Neuman was 2nd in 50.07.

The win was not a total shock, but the margin, especially to the two leading teams, was. Division III school Case Western was 2nd in 6:45.02, and Xavier was 3rd in 6:45.77 – more than four seconds behind the winning Bonnies. That was in spite of a 1:38.87 leadoff from their star Andrew Martin.

Maddy Gatrall and the Akron Zips continued to dominate their home invitational on Friday, sweeping all of the day’s events on the women’s side. Archive photo via Akron Athletics

It’s at Cleveland State not Akron.