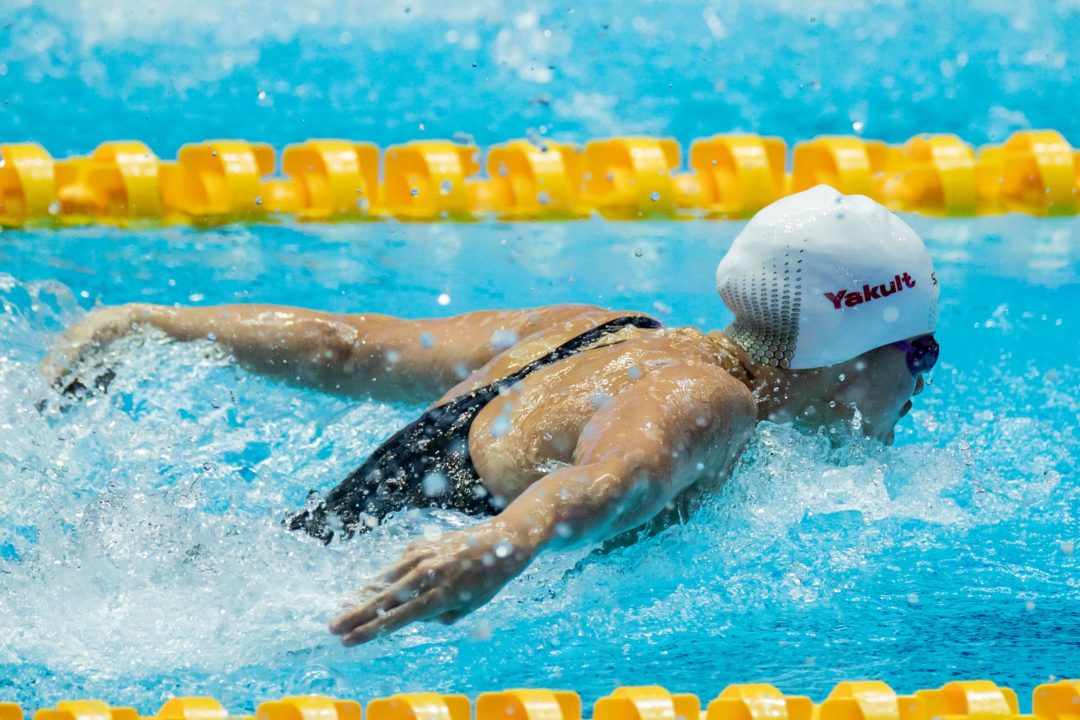 Maggie MacNeil capped off her impressive triple by splitting a 49.10 100 fly on the 400 medley relay, marking the fastest split in history. Archive photo via Joseph Kleindl

Maggie MacNeil wasted no time making a statement at the Art Adamson Invitational. She swam a triple tonight and each of her swims were impressive. First, she split 20.59 on the 200 freestyle relay, which is the 10th fastest split all-time and makes her the seventh fastest performer. MacNeil didn’t often get a chance to show off her speed with a relay start at Michigan, as she typically led off the relay. She teamed with Katarina Milutinovich, Peyton Curry, and Michaela De Villiers post 1:27.63, hitting an NCAA ‘A’ cut after LSU had no relays qualify last year.

She backed up that split with a lifetime best 21.03 in the individual 50 freestyle. Not only does that tie Erika Brown‘s SEC record, it also makes her the fourth fastest performer all-time, bringing her closer to joining the sub-21 second club.

She closed out the night by blazing a 49.10 butterfly split on the 400 medley relay–the fastest 100 fly split in history. Brown swam 49.11 at 2018 SECs, so she just out-touched her for the record. Earlier this season, we saw MacNeil briefly hold the record for fastest unsuited 100 fly time in 50.84. In this relay, she was out in 22.71 and came back in 26.39. Similar to how she usually led off the 200 free relay, swimming the fly leg is relatively new for MacNeil. At Michigan, she would usually swim backstroke while Olivia Carter handled fly duties.

We’re only one day into this meet, but MacNeil has thrown down the gauntlet early.

MacNeil wasn’t the only LSU swimmer dropping fast times this session. Olympian and defending NCAA champion Brooks Curry ripped 18.94 to win the 50 freestyle. That’s the first time someone’s been under 19 seconds this season, and improves upon the fastest time in country which he set in prelims at 19.12.

It’s not a best time, but it’s a strong mid-season swim for Curry. At this meet last year, he posted 19.14, 19.09, and 19.30. Therefore, this marks a huge improvement for him for this point in the season. He didn’t lead off the 200 free relay this year, but he did split a speedy 18.38, which was the fastest in the field by a considerable margin. He helped LSU to a second place finish in the relay in 1:17.95, just .10 seconds behind Alabama.

The Texas A&M men put on a show in the 200 IM, sweeping the first four spots and also claiming sixth and seventh. Leading the way was freshman Baylor Nelson, who was SwimSwam’s #1 recruit in his high school class. The Aggies are counting on Nelson to stop their free fall down the national standings, which began after Shaine Casas turned pro. He’s shown that he could be the answer they were looking for, winning the 200 IM in 1:41.83.

It’s a personal best for him and his first time under 1:42. His previous mark stood at 1:42.01 from December 2021. The time also checks in as the current fastest time in the country, though Leon Marchand is in action at the Wolfpack Invite this weekend and might have something to say about that.

MacNeil pulled off an impressive triple, but she wasn’t the one with the most swims of the session. Aggie junior Chloe Stepanek navigated four swims on day 1: she was a part of both the 200 free and 400 medley relay, and raced the 500 free and 50 free individually.

Amazing McNeil can learn relay starts so quickly…. Maybe its the effort put into the relay, the Hype, and not the mechanics of the start, that matters. Hope Stanford takes note

Victor Johansson won the “500” free. Lightning quick by McNeil, the battles between her and Douglass and the Walsh sister have to make these NCAAs the fastest ever in the prime events

The chop of a relay vs the clean water of an individual makes a difference. Also, they are done by the same person who may not be at their fastest this meet.

It’s actually a similar story on the men’s side. Fastest split is 43.3 from schooling and the fastest flat start is 42.8 from dressel.