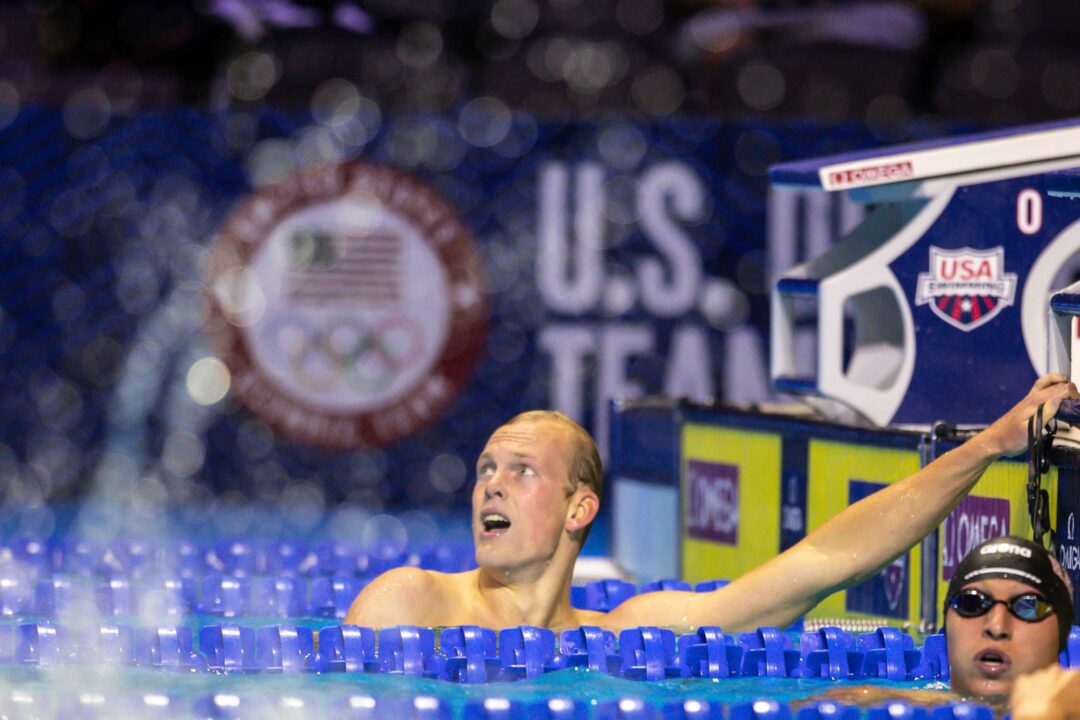 We already did a full recap of yesterday’s match between Texas and Southern Methodist, but we missed one notable detail in the sea of fast swimming, However, one of our commenters pointed out this evening that Texas freshman Luke Hobson set a new National Age Group record for the 17-18 age group as he won the 1000 free with a time of 8:43.66.

But Hobson quickly took his times to the next level within months of arriving on The Forty Acres. He exploded at the Minnesota Invite, splitting 1:31.34 on the Longhorn’ ‘B’ 800 relay on the first night. The next day, he broke Michael Phelps’ National Age Group record in the 500 free in prelims, then broke his own record that night finals with a 4:09.72. He wrapped up the meet by winning the 1650 with a time of 14:40.15.

Hobson has kept that momentum going during the second semester. Just two weeks ago, he moved to #6 in the 17-18 age group and (#1 in the NCAA this season), with a 8:48.09 in the 1000 free against TCU. In that race, he narrowly beat teammate and NAG record holder, sophomore David Johnston.

The pair dueled again last night, and once again Hobson just beat his teammate, this time 8:43.66 to 8:43.96. However, this time Hobson’s performance was enough to take the NAG record from Johnston, who had set it in the fall of 2020.

After struggling for a few years after the gradation of Clark Smith, who owns the American Record in the 1000 free, the Longhorns distance crew appears to be back on track. If Hobson, Johnston, and other distance guys like Alex Zettle can all score at NCAAs, that’ll go a long way toward helping the Longhorns hold off the Cal Bears in their perennial battle for the NCAA team title.

“He’ll be joining a high-level training group in Austin as well—six of the top-21 finishers in the 500 at the 2021 NCAAs were Longhorns, all of whom will be returning this season. While that may make it very hard to crack the NCAA roster from the jump, Hobson has the tools to contribute both individually and in relays, sooner rather than later.”

I’m not trashing swimswam at all, but this is what they had to say about Luke as recently as Aug ’21

Hell, Gabe Jett was a “best of the rest” and dropped at 1:32 200 free. You think ranking 17-18 year old swimmers is an exact science? Have you ever followed football recruiting?

Horninco – I’m not being critical of it at all. As a matter of fact, I’m supporting your point. Things change and can change quickly. I kind of wrote it for all those class of ’22 and ’23 and ’24 who don’t “rank” where they want to. Get up and prove people wrong.

What happened to Clark Smith?

A lot of injuries. Hasn’t been the same since 2017

Made the Olympic team

And won an Olympic gold medal to boot.

Wow. This guy is gonna do something SPECIAL at NCAAs…

On another note, I personally don’t believe that NAG records should be able to be set by college swimmers, even if they meet the age requirement. College swimmers can’t compete at junior nationals, so it doesn’t make sense why they can set junior records.

College athletes can compete at Junior Nationals if they meet the age requirements. It’s actually explicitly stated in the meet information.

But if they are the correct agave, I don’t see the problem. They are not “older” just because they go to college. In Australia there are a lot of 17 and 18 year olds in the first year of college or University.

there are several college swimmers on the Junior National team