Hobson and Johnston Clock 8:43 1000s In Longhorn Defeat of Mustangs 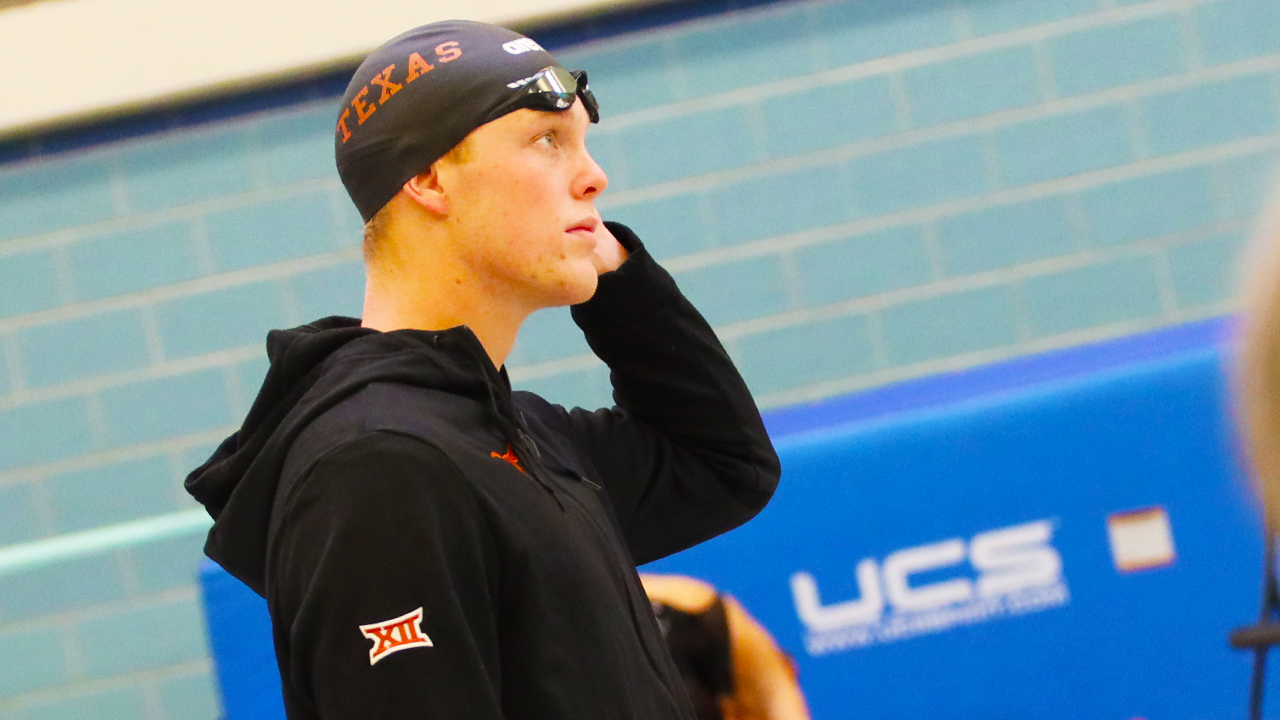 The Texas men defeated Southern Methodist in a dual meet marked by several fast swims, including a NAG record, a few weeks ago from championships season. Archive photo via Coleman Hodges

The Texas men defeated Southern Methodist, 164-127, in a dual meet that was supposed to feature the Texas women too. Instead, the Texas women did not make the trip, but the Mustang women still got their swims in. We’ll note here that Texas exhibitioned the last few events, giving SMU those points.

We fired off a quick post about the first event of today’s dual meet between the Texas and Southern Methodist men, but the Longhorn men didn’t really slow down from there.

Those are the two fastest times in the NCAA this season, improving on the pair of 8:48s the duo swam two weeks against TCU. Jake Foster, who’s primarily more of an IM/breaststroke type, took 3rd in 8:49.85, actually moving him into #3 in the NCAA this season. Unlike most of those who swim the 1000 free in-season, he’s not likely to swim its championship-season counterpart, the 1650 free, as he’ll be swimming the 200 breast instead.

Hobson and Johnston now rank #8 and #9 all-time in this event, according to the USA Swimming database. The fastest time in history belongs to former Longhorn Clark Smith, who swam a 8:33.93 back in 2015.

As pointed out by one of our commenters, Hobson appears to have set a new 17-18 National Age Group record. The record was previously held by Johnston, who swam a 8:45.38 just over a year ago as a freshman.

Based on the results, not all of Texas’ men appeared prime for big swims today (and we’re not sure who all was or was not wearing tech suits), but there were still several other notable performances.

Carson Foster won the 200 back with a fast time of 1:39.25. That’s now the 2nd-fastest time in the nation this season, behind only the 1:39.24 that Cal’s Destin Lasco swam at the Minnesota Invite.

Drew Kibler, who was the 200 free runner-up at last year’s NCAA Championships, swam a season-best time of 1:32.74, breaking his own pool record and moving to #5 in Division I this season.

While it wasn’t a win, freshman Anthony Grimm picked up a lifetime best in the 50 free, coming in 2nd with a time of 19.60. His previous best of 19.67 came nearly three years ago as a high school sophomore at the Virginia Class 6 State Championships. Similarly, he had earlier this evening improved his three year-old lifetime best in the 50 back while leading off the Longhorns’ 200 medley relay.

Likewise, his fellow freshman Tim Connery didn’t win an event, but he did set a new lifetime best with his time of 46.53 in the 100 fly.

Teammate Alvin Jiang won the 100 fly, stopping the clock in a time of 45.82 that was nearly identical to his 100 back winning time of 45.83. The Longhorn fifth year was a NCAA A-finalist in both events last year.

That was the only outright win on the day, but the Mustang men and the women (who essentially time trialed swims after the Longhorn women didn’t make the trip from Austin) swam to several season-best times.

Good catch. Somehow that didn’t event cross my mind. Thanks!

Looks to me like Eddie’s taking a different tack this year. Since their conference meet is a joke, looks like he’s looking for some fast swims now so he has time to reload training before NCAA taper. Either that or they’re going to be batsh*t insanely fast at NCAAs. Hope it’s the latter. We’re due for some crazy NCAA times.

Definitely leaning towards batsh*t crazy. At their Texas Invite this year, didn’t they post 2 relays in the 1:23 range? Their depth this year is off the charts, and it wasn’t too long ago they put 6 out of the top 8 100 butterfliers in the final at NCAA’s. I don’t think they have THAT depth, but I think the players they will bring to NCAA’s will be off the charts. At least 2 guys in every final

Hard to imagine going 8:43 in a dual meet. That’s holding 52.3.
Even harder to imagine doing that and getting second.

While the SMU Mustangs pretty much had their lunch served to them by the Longhorns in this loss, I gotta say that their “relatively” new Robson & Lindley Aquatics Center is an absolutely fantastic place to be swimming competitively. No wonder the AAC will be having its own conference championships here in mid-February — the second year in a row.

Only issue currently is no warm down pool. Will be awesome once the outdoor 50m pool is finished next summer.

As long as you don’t need to warm-down in February. It’s f’ing freezing in Texas now.