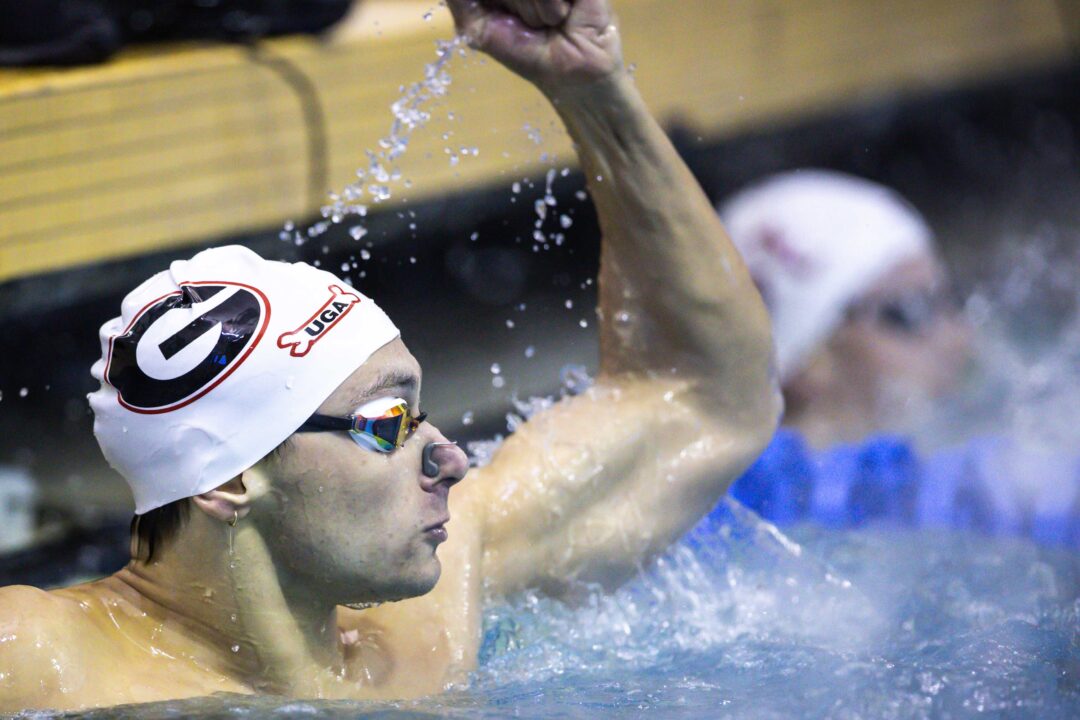 With his 43.35 backstroke leadoff in the 400 medley relay and his 43.80 in the 100 butterfly, Luca Urlando is the first man under 44 seconds in both events. Current photo via Jack Spitser/Spitser Photography

With his incredible 43.35 backstroke leadoff in the 4 x 100 medley relay Friday, as well as his 2nd-place effort in the 100 butterfly earlier in the session Friday evening, which clocked in at 43.80, Georgia sophomore Luca Urlando is now the first and only man to swim under 44 seconds in both the 100 butterfly and 100 backstroke.

Before delving into the history of breaking 44 in the 100 fly and 100 backstroke, let’s first take a quick look at the 45-second barrier.

While it is quite common now to see men posting 44-high or 44-mid in the 100 fly and 100 back, just 15 years ago this was a rare feat, then Arizona’s Albert Subirats came along. In 2007, Subirats became the first man to ever break 45 in both the 100 butterfly and 100 backstroke. At the 2007 NCAA Championships, Subirats won the 100 butterfly in 44.57, and then later won the 100 backstroke in 44.83. Furthermore, Subirats took his fly out in a 20.81, and also posted a 20.61 backstroke split as the leadoff swimmer for Arizon’s 200 medley relay in prelims (the relay would be DQ’d in finals, along with 2 others, Texas and Northwestern, though leading off that finals relay Subirats would post a 20.5). Nonetheless, that also made Subirats the first man to go sub-21 in both the 50 butterfly and 50 backstroke.

Now for some more recent history to further put Urlando’s accomplishment into context.

No man had ever broken 44 in the 100 yard backstroke until Ryan Murphy‘s incredible campaign at the 2016 NCAA Championships, which took place at Georgia Tech, the very pool they are being held this year. Murphy led off Cal’s 4 x 100 medley relay in a blistering 43.51, destroying the former NCAA, U.S. Open, and American Record by over half a second. Murphy would lower that record again the following day to 43.49 in the final of the individual 100 backstroke. Texas’ Joseph Schooling would come very close to cracking 44 in the 100 butterfly at the same meet, but would fall just short, winning the NCAA title and resetting the NCAA and U.S. Open Records to 44.01.

About 3 months later, both Schooling and Florida’s Caeleb Dressel swam sub-44 for the first times in their careers at the 2017 NCAA Championships. Dressel defeated Schooling, taking his year-old NCAA Record, while also robbing Shields of the U.S. Open and American Records in the race. Schooling, meanwhile, would also swim under Shields’ time with a 43.75 at that 2017 NCAA Championships. Stanford’s Andrei Minakov passed Schooling to become the 2nd-fastes performer all-time with title-winning performance Friday evening of 43.71, which also reset the Stanford program record, now formerly held by Staab. Dressel’s time of 43.58 stood for only one year until Dressel again lowered it to the current 42.80 at the 2018 NCAA Championships.

While 3 men all within a few months of one another burst into the 43s in the 100 butterfly, it wasn’t until 2019 that anyone else joined Murphy with another 43-second 100 backstroke. Enter Dean Farris and Coleman Stewart.

At the 2019 NCAA Championships, Harvard’s Farris blasted a 43.66 to win the NCAA title in the 100 backstroke and become the then-2nd-fastest performer all-time. Stewart posted a 43.98 in the 100 backstroke to place 2nd to Farris and become just the 3rd man under 44 seconds at the time. While Stewart has brought his time down to a 43.62 since then, Farris’ lifetime best remains 43.66.

If the 2020 NCAA Championships had not been cancelled due to Covid, perhaps Stewart would have become the first man sub-44 in both race, but he would of course go on to lower the World Record in the 100 SCM backstroke at the beginning of the 2021 ISL season in Naples, Italy, so his career has still gone pretty well.

The 2022 Men’s NCAA Championships has been nothing short of incredible, with new and unexpected records coming seemingly every evening. We are down to the final day, which will feature the 1650 freestyle, the 100 freestyle, the 200 breaststroke, 200 backstroke, and the 200 butterfly where Urlando will have a very realistic shot at claiming his first individual NCAA title, if he can get past Louisville’s Nicolas Albiero, the reigning NCAA Champion and 2nd-fastest performer all-time in the 200 butterfly. Finally, things will cap off with the 4 x 100 freestyle relay, awards will be given out, and the meet will end. We will then begin to speculate how fast these swimmers will be in long course, who will make the 2022 World Championship team and in what events, etc. March is a great month to be a swimmer, swim fan, swim parent, or swim coach.

Among the more interesting names missing from this list are Derek Maas, who ranks 101st: he’s one of the best 100 breaststrokers in the NCAA right now, and Aaron Peirsol, who would be on the list if we extended the list to all-time (which we would love to do, but which USA Swimming’s database can make challenging to do), would be 77th with a 45.02 100 back/47.06 100 fly.

Subirats should be higher on the 100 fly / 100 back list. I think your data pull needs a check.

Another miss is Joe Young. Add in another column for 320 pound overhead log press and he’ll move up to #1.

If only Georgia knew how to train sprinters.

I met David Plummer at a meet a couple years ago, shortly after his retirement. Somehow, Subirats’ name came up in our conversation, and I could tell that Plummer was just in awe of the guy. This was shortly after Plummer had won individual bronze and relay gold at the Rio Olympics, so he was no stranger to success himself!

I think it’s interesting how based on our own competitive lives each of us picks up certain people who have an outsized hold on our emotions. The kid from across town who does all the same events as you and who you just can’t seem to beat. The senior who dominates your conference when you’re a freshman. The name on… Read more »

Are we sure Matt Grevers wasn’t the first to crack 45 in both?